Welcome back!  BDH and Little Buddha just told me that today's high is going to be 26 degrees, with a windchill making it feel like 14.  Say what?  It's a good thing I just skimmed the furnace and scheduled its annual maintenance appointment.   I've got some more stuff on the to-do list, but it can all be done inside, so I'm thinking we might just set up shop here for the day.  I'll make a decision about that later, but first, let's check out today's headlines.  The guys say the coffee is ready, so grab yourself a nice medium DD, because it's time to check out some Wednesday Clutter.

The House Intelligence Committee will host the first public impeachment inquiry hearing today, starting at 10:00 this morning.  It's time for Democrats to make their case directly to the American people that Donald Trump is not above the law and must be held accountable for his broad corruption and obstruction.  Bill Taylor and George Kent will be the first witnesses to appear before lawmakers to openly discuss Trump's actions regarding Ukraine.  The question will now become whether any Republicans will stop following Trump off the cliff when this case is laid out for them. 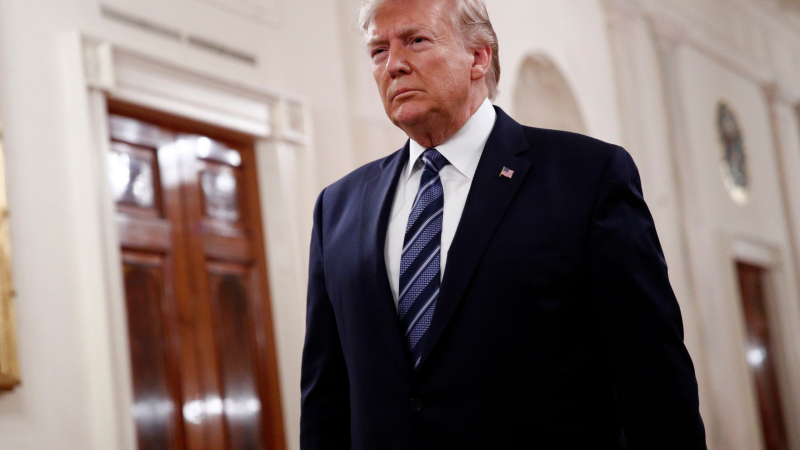 The next chapter begins.  (pic via www.wowktv.com)

Speaking of obstruction, according to The New York Times,  Donald Trump is reportedly considering firing the intelligence community inspector general, Michael Atkinson, for deeming the Ukraine whistleblower's complaint credible and passing it along to Congress.  That would be pure retaliation and give Senate Republicans one more reason to reconsider whether or not to save Trump in an impeachment trial.

As public impeachment hearings begin, Republicans are apparently planning to defend Donald Trump based on his "state of mind" during the July 25 call with Ukraine President Volodymyr Zelenskiy.  Translation:  They've got not reality-based material to work with, so their hail-Mary is to try to pretend with straight faces that they're not enabling a pathological liar.

The DACA program's fate appears to be in serious jeopardy after yesterday's Supreme Court oral arguments.  The conservative majority of justices appears inclined to condone Donald Trump's elimination of the program, even if Trump lied about his rationale for ending it.  The Great Pumpkin will be out of office eventually, but the harm done by his judicial appointments will last for decades at a minimum.

The Supreme Court doesn't get everything wrong:  The court will not block the Sandy Hook families from suing the gun company Remington Arms.  If Congress is going to continue to abdicate its duty to protect the American people, perhaps the courts will have something to say about the issue.

Former New York Mayor Michael Bloomberg was in Arkansas yesterday to file his paperwork for the Democratic presidential primary.  The arrogance of the latecomers to this race is amazing.  One might suspect they'd rather play spoiler and have Donald Trump remain in the White House than have the status quo, which serves them so well, challenged.

It's been at least a day or two since we had a Facebook security issue to discuss, so let's change that:  Apparently some versions of the iOS app open the camera in the background without the user's knowledge.  Facebook says this is a bug, and they're working to fix it, so really there's nothing to worry about, right?

BDH and Little Buddha would like you to know that they're not secretly using any cameras if you visit our Facebook page, because that's just plain old creepy.  They just want to say hi to everyone who drops by and remind you that we have other stuff on the page besides our daily posts, that's all.

Our crew has been cutting back on our dairy intake in recent years, and milk is just about entirely gone from the diet.  It's better for our health, but we didn't realize it would lead to milk producer Dean Foods declaring bankruptcy.  Sorry about that.

For the Boston Red Sox fans who are wondering, the Boston Globe's Alex Speier explains that there's no way for the team to avoid having Dustin Pedroia's contract count against their salary cap while they try to reduce payroll.  The Sox knew the risks they were taking when Pedroia agreed to a hometown discount in exchange for more years back in 2013.  It would be terrific if the second baseman could somehow find a way to return to the field in 2020, but one way or another, he's getting paid (as he should), and there's no get-out-of-jail free card for that deal.  Besides, dead money is a bit of a tradition for the Sox in recent years.  At least Pedroia demonstrated his value, as opposed to say, Pablo Sandoval.

Gabe Kapler has been hired as the new San Francisco Giants manager, replacing the retired Bruce Bochy.  That seems like a pretty steep drop.

The Houston Astros are launching their own investigation into allegations that they stole signs during their 2017 championship season.  Let's take a wild guess - they won't find much significant rule-breaking beyond one or two individuals.

The NFL apparently decided that quarterback Colin Kaepernick will have a private workout for any interested teams this coming Saturday.  The news seemed to come as a surprise to Kaepernick, although he says he's ready.  This feels like he's being set up to fail.  It's short notice, and many key decision-makers won't be able to attend because they'll be getting ready for this weekend's games.  We wish Kap the best of luck and hope he's able to force a team to put politics aside and give him a job, given the criminal offenses many of the players in that league commit without significant/any repercussions.

Disney+ might have had a rough time getting out of the gate on its first day yesterday, but it did provide us with this deleted scene from Avengers: Endgame, so the day wasn't a complete loss.  No spoilers from us, but we will say that while we understand why it was cut from the final version of the movie, it still has an impact.  (Enjoy this clip while you can, because the ones we pick keep getting deleted from YouTube.)

HBO Max wants to make sure you don't forget about them, so they're apparently working on a Friends reunion.

The new Charlie's Angels movie sounds like it might be interesting.  Anyone want to check it out with us?

We don't have a whole lot of experience with virtual reality games and the like.  Pretty sure the only thing we've tried is a quick demo at a Red Sox game last year, which was cool.  It's probably just as well that we stay away from all of that stuff, because Doctor Who: The Edge of Time just came out yesterday, and there's a pretty decent chance we'd never leave that game if we played it.  Who turns down a chance to be in the TARDIS?  That's truly the stuff of our dreams:

Uh-oh, we were just talking about the interesting creative decision to have Days of Our Lives jump ahead one year in their storylines.  Now comes word that the entire cast has been released from their contracts while NBC decides whether or not to renew the show for a 56th season.  That doesn't sound like a vote of confidence about the future.  Daytime soap operas are a dying breed, and it would be too bad to see this one bite the dust.

Okay kids, that's going to do it for now.  Let's have Rob Thomas take us out with, "Her Diamonds," for today's, "Song of the Day."

What's Alicia Silverstone up to these days anyway?

Thanks for stopping by, everyone.  It's always a treat to see you.  Bundle up before you go outside, be good, and we'll catch up with you again soon.  Until next time, that's today's Clearing out the Clutter, and we are outta here.