Welcome back!  How are you?  I'm just waiting for a weather report from BDH and Little Buddha...they should be back in a second...Yesterday was ridiculous.  We spent most of the day inside watching the impeachment proceedings.  I finally had to go out into the cold to grab some dinner.  I just went to a place down the street for some take-out, but even that was unpleasant.  Oh, hold on, they're back.  We're looking at a high of 33 degrees, but at least the wind has died down.  I guess that's better.  Anyway, let's check out today's headlines.  The guys made coffee, so grab yourself a nice medium DD, because it's time to clear out some Thursday Clutter.

Impeachment witnesses Ambassador Bill Taylor and Deputy Assistant Secretary of State George Kent made it clear yesterday that Donald Trump placed his own interests before the country's and extorted Ukraine to investigate the Biden family and a conspiracy theory about Ukraine interference in the 2016 presidential election.  The two men gave detailed accounts of Trump's insistence that aid to Ukraine be tied to that country's acquiescence to his demands, his direct connection to the pressure, and their concerns about Rudy Giuliani's influence on the administration's policies.  The best that Republicans could say in response was, "Hey, Ukraine eventually got their aid, so what's the problem?"  There was also an attempt to argue, "It could have been worse," so you know they're not playing with a great hand. 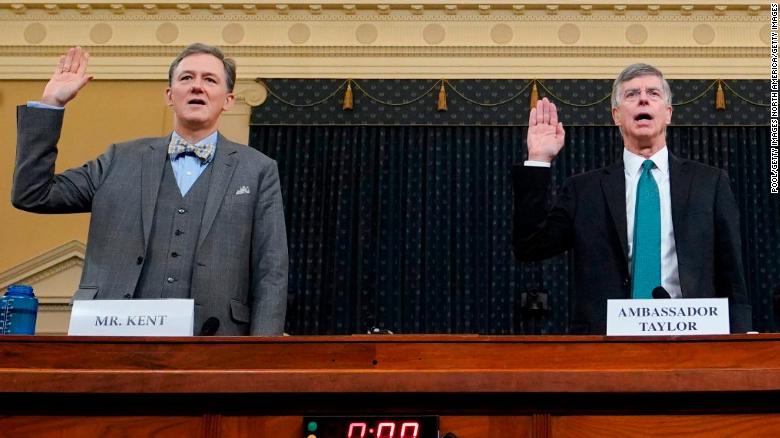 George Kent and Bill Taylor preparing to testify on Wednesday.  (pic via cnn.com)

A quick reminder for those who don't seem to grasp the concept:  Much like attempted murder is a crime and attempted robbery is a crime, attempted extortion and bribery is a crime.   The only reason Ukraine eventually got the aid without launching a corrupt investigation to appease Donald Trump is because of the whistleblower's efforts.  A criminal doesn't deserve a free pass because they were thwarted from completing their well-documented efforts to commit the crime.  As for those screaming that Taylor and Kent didn't have any direct conversations with Donald Trump, the White House refuses to let those who did testify before Congress.  The GOP knows full well that the Great Pumpkin is guilty of everything he's being accused of today.  They just don't care.  If this exact same course of action had been carried out by Barack Obama, Republicans would already have removed him from office.

Donald Trump suffered another loss yesterday when a federal appeals court ruled he must turn over his financial records for the last eight years to House Democrats.  Trump's only hope now is that the U.S. Supreme Court will save him, and he's in a weak position from a legal perspective.  Meanwhile, the country can continue to debate what's the most likely explanation for Trump's fervent desire to keep his records secret.  Is it that he's not worth nearly as much as he claims, he's been involved in money laundering for years, or something else?  The public has a right to know, and Congress has the legal right to examine the records as part of their constitutional oversight duties.

Deval Patrick is expected to announce his presidential bid today.  As we've stated before, we have all the respect in the world for the former Massachusetts governor (and in fact worked in his administration in a previous life), but this late entry is a mistake.  Governor Patrick has been largely out of the political fight since he left office, and this attempt to "cut in line" in the process will not be well-received by voters, despite his inspirational rhetorical skills.  What we're interested to see is the dynamics between him, Michael Bloomberg, and Joe Biden, who will likely fight over the same supporters.

Google will reportedly start offering checking accounts next year.  Who believes their claim that they won't sell your financial information to advertisers.  Show of hands...

Facebook says they've removed over 3 billion fake accounts this year.  The company says these accounts were yanked before they become active, which means they don't get included in the "real account" numbers.  Apparently roughly 122 million "real" accounts are also fake.  BDH and Little Buddha assume the people who don't say nice things on our Facebook page are phony, so they get ignored.  However, everyone else is real.

We mentioned yesterday that we stopped drinking milk a while back.  Even if that wasn't the case, the new Twinkies cereal would be a hard pass.  Any parent who buys that should have their kids removed for child abuse.  Just looking at the picture makes us want to brush our teeth again.

Oh-oh, Boston Red Sox manager Alex Cora is one of the people who has been implicated in the 2017 Houston Astros sign-stealing scheme.  That's disappointing.  Stay tuned for further developments on this story.

Over in the National League, Jacob deGrom won his second straight Cy Young Award.  Unfortunately, deGrom still pitches for the New York Mets, so things could be better for him.

So far, 10 NFL teams are reportedly planning on attending Colin Kaepernick's private workout on Saturday.  We still think the league's abrupt scheduling of this event and having it on a Saturday is suspicious, but we wish Kaepernick the best of luck.  A number of the teams on that list are in serious need of quarterback help, so here's hoping he can force them to put politics aside and give him a fair shot.  The New England Patriots are one of the teams expected to attend, and Kap could be a solid bridge during the post-Brady transition.

The names of the writers and directors for season 12 of Doctor Who were revealed yesterday.  There's a lot riding on the writing this year.  Jodie Whittaker brought a great energy to the Doctor in her first year.  However, her version of the character is not well-defined, apart from being generally happy, and it needs to be further-developed.  A number of season 11 plots were also pretty thin, and there wasn't nearly enough TARDIS time.  The amazing blue box is one of the most terrific concepts in television - it needs to be utilized to its fullest potential.  Hopefully this year's creative team (which includes three returning season 11 writers) can move the show forward in the upcoming season.

Oh, and did we mention that the trailer is coming out in nine days?  Can.  Not.  Wait!

Okay kids, that's going to do it for now.  Let's see how the reunited Black Crowes sound.  Here they are, performing, "Jealous Again," on The Howard Stern Show, for today's, "Song of the Day."

We still think the Robinson brothers will still be at each other's throats again sooner rather than later, but that was a pretty solid performance.