How are you?  Did you have that big thunderstorm we had here last night?  That was just rude.  Woke us right up from a nice deep sleep.  Today's forecast originally said it would probably rain all day today, but now it's not supposed to start until this afternoon.  We'll see.  Oh, we had big wins on the book front yesterday.  I found a new release for BDH and Little Buddha to read, and we also picked up two more books at Dad Clutter's house yesterday.  Score!  That should keep those two busy for at least a week.  Speaking of the guys, they say the coffee is ready, so grab yourself a nice medium DD, because it's time to clear out some Wednesday Clutter.

The calls for the return of indoor mask mandates are getting louder, as coronavirus case numbers continue to rise again in the United States, thanks to unvaccinated people.  We understand that for some folks who still haven't gotten their shots, it's an issue of getting access to the vaccines, which may mean taking time off from work.  Their employers should pay them to take care of this.  If there are others who truly have legitimate questions about the vaccines, it feels like they've had plenty of time to have those addressed, but we encourage them to talk to their doctor.

It's the rest of the MAGA cult that has no excuse.  They've been brainwashed by Fox News (whose anchors have gotten vaccinated) and Donald Trump (who got vaccinated in January), and they legitimately need a deprogramming.  These fools are hijacking a straight-forward path out of the pandemic so they can "own the libs," because that is apparently their number one desire in life.  The low self-esteem issues that must be involved to obsess about that, over your own health and safety, are mind-boggling.

Billionaire Jeff Bezos went high into the sky in his phallic-shaped rocket yesterday, and then he came back down to Earth and thanked Amazon employees for paying for it.  No really:

In a news conference after the launch, Bezos made a special dedication. "I want to thank every Amazon employee and every Amazon customer," Bezos said, "because you paid for all of this."

Bezos made his money by avoiding paying his fair share in taxes, providing his employees terrible working conditions, and not paying them a fair wage, and then he's got the gall to think them for making his wasteful joyride possible.  There's nothing inspiring about this ego contest between billionaires who want to go to space.  They're a shining example of how broken our tax code is, and how it coddles the rich at the expense of everyone else, while the planet burns.   Next time, let Bezos, Richard Branson, Elon Musk, and any of the other rich guys who want to leave the planet, all go together on a one-way trip.  Short of that, make them pay what they owe the country. 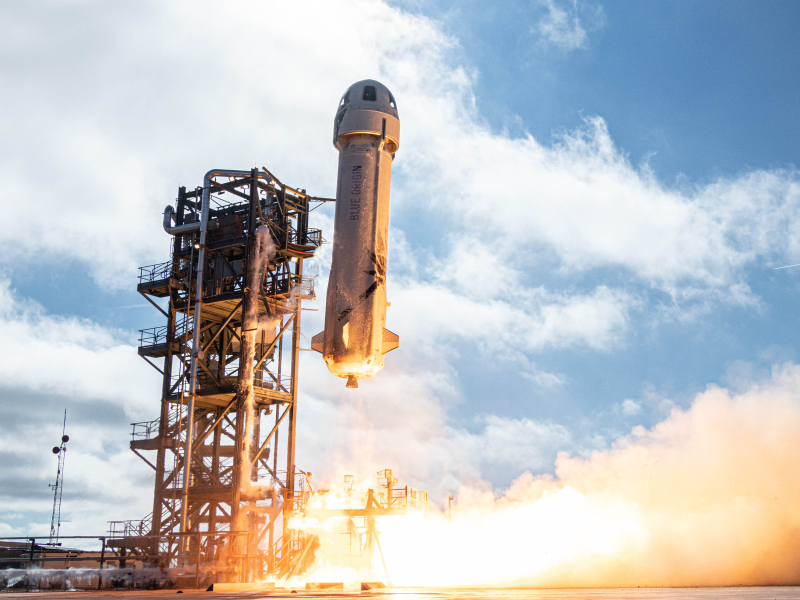 So much overcompensation.  (pic via space.com)

The Tampa Bay Buccaneers celebrated their Super Bowl win at the White House yesterday.  It's still a little surreal to see Tom Brady celebrating a championship with another team, but Brady making two jokes at Donald Trump's expense?  We're here all day for that.  It must be eating the Great Pumpkin alive that his "good buddy" Tom made fun of him while hanging out with President Biden, and thus reminded everyone once again what a fraud and loser Trump is, and that's a glorious thing to watch.

Meanwhile, former Trump adviser Thomas Barrack has been arrested and charged with acting as a foreign government agent.  Barrack is accused of lobbying for the UAE between 2016 and 2018.   Our first question is, what was Trump's cut of Barrack's paycheck?

A federal judge blocked a new Arkansas law banning all abortions except for those that would save the life of the mother.  Rape or incest survivor?  You're out of luck, conservatives think you should be forced to continue that pregnancy.  The law blatantly violates the viability requirements in Roe v. Wade, and it's clear that its proponents were just looking for a case to send to the U.S. Supreme Court to try to finally overturn Roe once and for all.  Tax cuts for the wealthy are the only thing that excite Republicans more than their never-ending assault on women's control over their own reproductive health.

The Boston Police Department has new guidelines for de-escalating interactions with people dealing with mental health issues.  That's better than nothing, but the police are still the last people who should be in that situation.  Individuals in crisis should be dealing with mental health professionals, folks who are actually trained to handle those problems, not armed individuals with no clinical experience.

You can probably guess our feelings about this Guardian article arguing that Doctor Who should go on hiatus for a few years.  Considering how long the show goes between seasons, it already feels like the BBC has put it on a soft pause.   Jodie Whittaker has been poorly-served by the generally-thin scripts her Doctor has been given over her first two seasons as the Time Lord.  Our money says her portrayal will get a massive upgrade when she eventually moves to Big Finish audio adventures.  That's an argument for replacing showrunner Chris Chibnall, not stopping the show.

The late great Robin Williams would have turned 70 years old today, so here's a look back at some of his best film roles.  We really could have used his humor over the past few years.

The first trailer for Ridley Scott's upcoming movie, The Last Duel is out, and we'll consider watching the movie in the fall.  Jodie Comer, Adam Driver, and Matt Damon are an impressive trio, but we're already distracted by the bleached blonde Ben Affleck, so we'll see.  The Last Duel comes out in theaters on October 15:

Marvel's head honcho Kevin Feige chimed in on whether or not he thinks Red Guardian actually ever fought Captain America like the Russian superhero claims in Black Widow.

MCU fans, what do you think about this apparent connection between the WandaVision and Loki finales?  We think it's pretty neat and shows an impressive level of attention to detail by all involved.

Looks like Kanye West has a new album coming out on Friday.  Are you ready for Donda?

Chester Bennington's widow Talinda marked the fourth anniversary of his death yesterday with an online tribute to the late Linkin Park singer.  Can't believe that's already been four years.  Where does the time go?

We included a link to a story a while back that claimed Sammy Hagar once considered becoming the new lead singer for the Grateful Dead.  That didn't really ring true with us, but it made for a fun conversation at the time.  Now Hagar is apparently claiming he almost became the singer for Aerosmith in 2009, when the band was on the outs with Steven Tyler.  This doesn't pass the sniff test.  Should we take bets on the next band Sammy will say he came close to joining?  Journey seems too reasonable, because the singer has a long-standing relationship with guitarist Neal Schon.  How about Mötley Crüe or Genesis?  Send us your picks at info@clearingouttheclutter.com.

Okay kids, that's going to do it for now.  Let's close things out with a little Linkin Park and "Bleed it Out" for today's, "Song of the Day."

Thanks for stopping by, everyone.  It was great to see you, as always.  BDH and Little Buddha want you to know that you're welcome to come back later to read and/or watch the Red Sox game with them tonight if you like.  We're going grocery shopping later, so just shoot us a quick note if you'd like anything special to eat.  Otherwise, enjoy the rest of your day, be good, and we'll catch up with you again soon.  Until next time, that's today's Clearing out the Clutter, and we are outta here.