Welcome back!  Ready for a new week?  Yeah, me neither.  The wind woke me up early this morning, and BDH and Little Buddha say it's supposed to last until about 6:00 tonight.  Hopefully we won't lose power.  Is it just me, or have the last few months been windier than usual?  I don't care for that at all.

One thing that does make me happy is that the Clutter Store is back!  BDH and Little Buddha have been working hard to come up with some new items for you to enjoy, so give it a look after we're done here.  Just remember that the store is only here until April 12, so don't miss out!    Thank you as always for your support.  Every purchase helps increase our coffee budget.  Speaking of which, the guys just made a fresh pot, so grab yourself a nice medium DD, because it's time to clear out some Monday Clutter.

Dr. Deborah Birx seems to be trying to rehabilitate her image after aiding and abetting Donald Trump's incompetent handling of the coronavirus pandemic.   Dr. Birx appears in a new CNN documentary where she says the number of deaths could have been "decreased substantially" if cities and states had learned the lessons of the first wave of the virus.   It would have helped if the federal government had hammered home that message, instead of talking about bleach and light injections and minimizing the seriousness of the crisis.  Working for Trump sounds like a nightmare, but Dr. Birx failed the country as his coronavirus response coordinator, and there's no coming back from that. 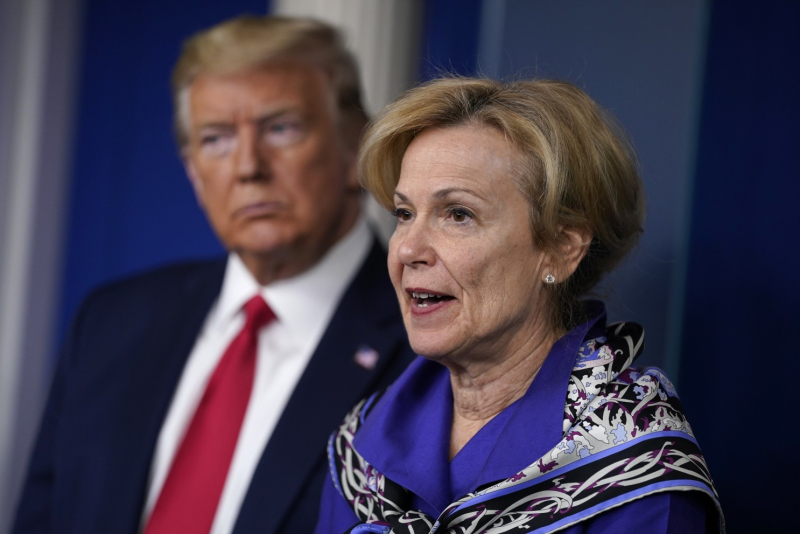 Too little, too late.  (pic via latimes.com)

Senator Lindsey Graham (R-South Carolina) wants everyone to know he has a gun at his house, so if there's a problem, he's ready to shoot people.  That's all Senator Graham has to contribute to the country at this point:  some overcompensating bravado to distract from the fact that he serves no other role than remaining Donald Trump's lapdog.

Speaking of Senator Graham's owner, it turns out there are now two grand juries looking into Donald Trump's attempt at overturning the election results in Georgia.

Derek Chauvin's trial for killing George Floyd begins this week.  The former police officer has been charged with second-degree murder, third-degree murder and manslaughter.  The lawyers will argue the specifics of which one best fits Chauvin.  However, it's clear George Floyd would have still been alive after May 20, 2020 if Chauvin hadn't put his knee on Floyd's neck for 8 minutes and 46 seconds, all because Floyd allegedly used a counterfeit $20 bill.  You can be a mass murderer in this country and still expect to live if you're white, but breathing while Black puts you in constant danger.  There has to be accountability for these deaths if we're ever going to make progress in this country.

Arkansas Governor Asa Hutchinson signed a law on Friday allowing doctors to refuse to treat someone because of moral or religious objections, a move designed to allow discrimination against members of the LGBTQ community.  Let's review, everyone is entitled to equal protection under the law.  It's spelled out in the U.S. Constitution, the document conservatives claim to support.  If your personal beliefs prevent you from doing your job, find a new job.

Apparently Amazon's recent aggressively obnoxious Twitter fights with Senators Elizabeth Warren and Bernie Sanders were driven by orders from Jeff Bezos.  The CEO reportedly didn't think the company was responding firmly enough to critics while it faces a unionizing challenge in Alabama.  The fact that a man worth more than $181 billion is so freaked out by the idea of a union shows that he knows his wealth came from poor working conditions.  Best of luck to the Alabama workers, and here's hoping they vote to form a union and start a revolution at the company.

The Boston Red Sox were having themselves a pretty quiet spring training, and then likely-closer Matt Barnes tested positive for the coronavirus, and now eight members of the organization are in contact tracing.  That sure changed in a hurry.  It's not clear who the eight people are, because of privacy issues.  However, manager Alex Cora has certainly been thrown a curveball to deal with just three days before the season begins against the Baltimore Orioles.  The whole situation is yet another reminder that while things are generally moving in the right direction, this pandemic still isn't over, so continue doing what you need to in order to keep yourself and those around you safe.

In better news,  Red Sox ace Eduardo Rodriguez already seems to be recovering from his bout with "dead arm," so hopefully he won't have to go on the Injured List.  This team could really use a strong start to the season, so fingers crossed they won't have any other major issues for a while.  It's so demoralizing when they stumble right out of the gate, so here's to smooth sailing ahead, please.

The NFL is expected to announce it's adding a 17th game to this year's schedule at some point this week.  Unless we've missed something, there doesn't appear to be another bye week to go with it.  This seems like overkill to us, but we all know that NFL owners won't be satisfied until they're playing all 52 weeks of the year.  Well, at least it means more time to hang out with Dad clutter and his cat.

Good luck to whoever is responsible for editing the WWE Network content that is being moved over to NBC's Peacock streaming service.  We can't begin to imagine what percentage of the WWE's archives won't make the cut.

Comic-Con is going virtual this coming July, but now they're also hosting a live convention on...Thanksgiving weekend.  Could they have picked a worse date?  Travel is already insane during Thanksgiving, and especially this year as (hopefully) millions of people will be celebrating in-person with their families.  We can't imagine how this will go well.  However, we will be keeping an eye out for any Doctor Who events to watch during the July event.  Hopefully there will be a new trailer!

Dwayne Johnson announced yesterday that his Black Adam movie will be released on July 29, 2022.  Have to admit, we know little about this particular DC Comics character, but we are looking forward to watching "the Rock" in action on a big screen next summer.

Okay kids, that's going to do it for now.  Let's see, we could use something to help kick-start this week...let's have Evanescence close things out with a track off their new album.  Here's, "Part of Me" for today's, "Song of the Day."

Thanks for stopping by, everyone.  It was great to see you, as always.  BDH and Little Buddha say you're welcome to come back later to hang out some more if you like.  Just let us squeeze in a quick nap first.  Otherwise, enjoy the rest of your day, stay safe, and we'll catch up with you again soon.  Until next time, that's today's Clearing out the Clutter, and we are outta here.