Welcome back!  How are you?  Did you enjoy the rest of your weekend?  Ours was fairly productive.  I took care of the one errand that had to be done before today, so I feel good about that.  Now we're just waiting for the next round of snow to arrive later this afternoon.  It doesn't sound like it should be that bad (2-3 inches.)  Plus, it's supposed to be in the 40's tomorrow, so can I just let the sun take care of things instead of shoveling, or is that being lazy?  Don't answer that.  BDH and Little Buddha just said the coffee's ready, so grab yourself a nice medium DD, because it's time to clear out some Monday Clutter.

The United States will record its 500,000th coronavirus-related death today.  That number is staggering, and it was largely preventable if we'd had a competent administration in charge from the beginning.  There are reasons to be hopeful - new cases are on the decline, and vaccinations are increasing.  However, we still have a long way to go, as people like President Biden and Dr. Fauci express cautious optimism for a return to something resembling "normalcy" by early fall or the end of the year.  We're all tired of this, but we must continue to do whatever we can to keep ourselves and our loved ones safe in the meantime.  Wear your masks, and practice social distancing, friends.  We'll get there eventually, and then let the hugging begin.

British Prime Minister Boris Johnson is expected to release his plan to ease the country out of lockdown later today.  Johnson has been burned by rushing the process before, so it sounds like he will take a more cautious approach this time, but let's see all of the details.

Massachusetts Governor Charlie Baker's reputation as a strong manager continues to erode by the day, as the commonwealth continues to have issues with its coronavirus vaccination program.  The numbers are improving, but Baker's heavy reliance on mass vaccination sites increases the risk of leaving out a lot of people, including members of racial and ethnic groups and those who are home-bound.  Governor Baker's recent expansion of those who are eligible to get a shot now, even though supplies are still limited, seemingly does little but increase delays and heighten frustrations.

Judge Merrick Garland will have his attorney general confirmation hearing before the Senate Judiciary Committee today, some five years after Republicans refused to consider him for the U.S. Supreme Court.  Garland has a large task before him, as he'll have to restore confidence about the U.S. Department of Justice, both inside and outside of the department, after the blatant partisanship of the previous administration.  He must also address the problem of radical white extremism which plagues this country.  Judge Garland has experience in this area, as he was involved in prosecuting the 1995 Oklahoma City bombing.  He may not be the leader in the area of civil rights that many are looking for, but he's not expected to be an obstacle either. There's no reason to think there will be any significant problems with his nomination this time, since Democrats now control the chamber.

Senator Susan Collins is ready to grab her pearls again.  Collins announced her opposition to Neera Tanden's nomination as the next head of the Office of Management and Budget, saying she doesn't think Tanden has the right "temperament" to lead the agency because of past partisan tweets.  Yes, Collins, who ts-tsk'ed Donald Trump while supporting his agenda for four years now wants to pretend she cares about politeness.   Such a fraud.  Now the question is, will the White House cut a deal with Mitt Romney for his support in an effort to save the day?

Representative Alexandria Ocasio-Cortez (D-NY) has now raised close to $5 million for Texas relief efforts.  This is what being a decent human being looks like, Senator Cruz.  Try taking notes.  Cruz is lucky he's not up for re-election until 2024, because he'd likely lose to an AOC write-in campaign at this point.  Of course, with fellow Texas Republicans criticizing him for his trip to Mexico in the middle of a crisis, one has to ask if Senator Cruz will make it to 2024.  Cruz made it clear he doesn't care about his state, so why should he be allowed to stay in office? 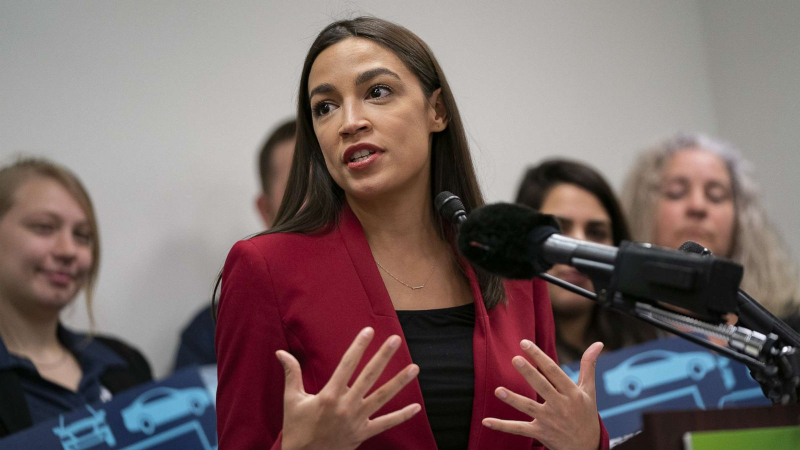 The next Texas senator?  (pic via abcnews.go.com)

House Minority Whip Steve Scalise (R-Louisiana) and other Republicans continue to push "the big lie" by claiming there was fraud in the 2020 presidential election.  Besides being dishonest, this is the kind of propaganda which leads to violence in this country, like the attack on the US Capitol.  Republicans can't win elections on the basis of their ideology, and their voter base is shrinking by the year.  That leaves them all-in on attacking U.S. democracy, because that's their only chance of holding onto power.

Speaking of "the big lie," Dominion Voting Systems (DVS) is suing MyPillow CEO Mike Lindell for $1.3 billion for making the same false claims about the presidential election and making false claims about DVS along the way.  Couldn't happen to a more deserving fellow.

We make a point of not mentioning Newsmax around here, but BDH and Little Buddha have to call out host Greg Kelly for criticizing President Biden's senior dog Champ.  Our crew has no use for anyone who would ever disparage a dog.  It's a tell-tale sign that that person is just a pathetic individual not worthy of our time.  It also shows how desperate Newsmax is to find something to criticize Biden for because they're angry the majority of the country approves of him, which is something his predecessor never achieved.

It seems like New Hampshire Governor Chris Sununu is considering running against Senator Maggie Hassan next year, so we'll be happy to support Senator Hassan's campaign.  Democrats have to expand their Senate majority in 2022, and they should be able to defend Hassan's seat.  New Hampshire is a generally purple state these days, so if Senator Hassan can point to the progress made for ordinary Americans between now and then, the onus would be on Governor Sununu to explain to voters why they should go backwards.

Boston Globe baseball writer Peter Abraham says there are reasons to feel optimistic about this year's Boston Red Sox.  They've got a number of starting pitching options right out of the gate, for instance.  We still need a media guide to keep track of all of the new guys, but that alone is a big upgrade from last year when it often seemed the Sox were blown out of the game by the third or fourth inning.  Also, he has some reputation rehabilitation in front of him, but it's clear that the players respond to returning manager Alex Cora.  We're particularly hopeful he'll be able to get third baseman Rafael Devers back on track.  Of course winning the World Series is the goal every year, but we're just looking for competitive games at a minimum, and this year's team should be able to provide those.  Give us a reason to care in September, and we'll call it a successful season.

Seattle Mariners president/CEO Kevin Mather did an amazing job of sabotaging his own career during a disastrous video conference call with the Bellevue Breakfast Rotary Club that's now on YouTube.  In just 45 minutes, Mather managed to insult multiple players, admit that the team didn't bring up promising prospects last year in order to control their service time, and brag about how well the team did financially.  The Mariners haven't been to the playoffs since 2001, but hey, their finances are good, kids!  It's a remarkable implosion.  The Mariners will have to move on from Mather while they try to convince their fans not to abandon them since winning clearly isn't a priority for the organization.

A tentative agreement has been reached in a class-action lawsuit filed against actor James Franco, who was accused of sexual exploitation while running his now-defunct acting school.  The financial amount involved hasn't been disclosed.

Brooke Shields is on the mend after fracturing her femur.  A member of our staff did that once, and it was no fun.  We're not naming names, but it took this individual almost a month to realize what they'd done.  Someone clearly needed more coffee at the time.

Late Nirvana frontman Kurt Cobain would have turned 54 years old this past Saturday.  Cobain was 27 years old when he died from suicide in 1994, and it's startling to realize he's now been gone for 27 years.

Okay kids, that's going to do it for now.  We could use a bit of a kick-start to this week, so here's Ozzy Osbourne teaming up with Post Malone to close things out with, "It's a Raid" for today's, "Song of the Day."

Thanks for stopping by, everyone.  It was great to see you, as always.  Enjoy the rest of your day, stay warm and safe, and we'll catch up with you again soon.  Until next time, that's today's Clearing out the Clutter, and we are outta here.

Posted by Colin Moore at 08:54 AM in Current Affairs, Music, Sports | Permalink | Comments (0)