Welcome back!  How are you?  Yesterday was frustrating.  We had a blast with you guys, but there were no new books to be found for BDH and Little Buddha.  After that, the schedule ended up getting thrown off for the day, which I rarely handle well.  Finally, the stress of all of (gestures around) this just hit me harder than usual.  I was a cranky camper by bedtime.  However, the guys reminded me that days like that will happen every now and again (especially during a pandemic that's almost a year old), and hey, we'll just start over today.  Those two always put things back into perspective.  They're the best.  They also make great coffee.  Speaking of which, there's a fresh pot on the counter, so grab yourself a nice medium DD, because it's time to clear out some Wednesday Clutter.

(Don't forget to check out our new T-shirt, which is only available until January 26!)

Vice President Mike Pence is putting his own political aspirations above protecting the country by refusing to invoke the 25th Amendment to remove Donald Trump from the White House.   That means the House will vote today to impeach Trump again, and this time, it will be a bipartisan measure, with Rep. Liz Cheney (the #3 Republican in the House) among those in the GOP who announced they'll vote yes.  House Minority Leader Kevin McCarthy (a longstanding Trump devotee) and his team aren't launching a defense for Trump this time, and Rep. Cheney told her Republican colleagues this is "a vote of conscience." 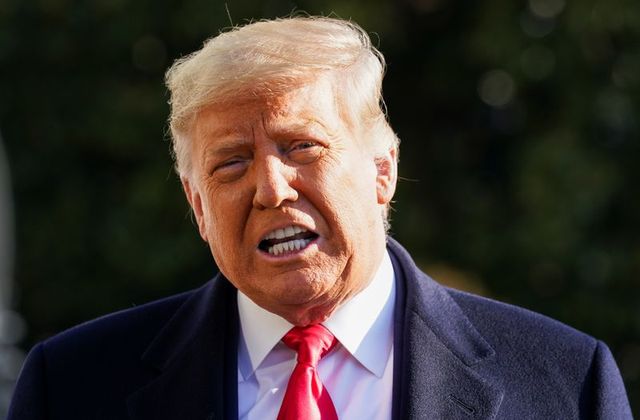 A fitting end to a disastrous administration.  (pic via usnews.com)

Meanwhile, soon-to-be-former Senate Majority Leader Mitch McConnell made it known he has no problem with the House voting to impeach Trump this time.  This seems like a sign from McConnell to Trump that if Trump doesn't resign before the 20th, McConnell might actually help remove him.  If McConnell gave the nod, the Senate would convict Trump 10 minutes after the House voted to impeach him.  It's not so much that we think Mitch has any interest in doing the right thing for the country.  However, being the strategist that he is, this would give him a chance to cut Trump out of the GOP, which would be both good for the party and payback for Trump costing McConnell the Senate majority.

YouTube is the latest tech company to take action against Donald Trump, in this case, suspending him from their site for at least a week after a video he posted raised safety concerns.  That means he's now been kicked off of YouTube, Facebook, Twitter, Instagram, and his new favorite hate site Parler (which has been shut down for the moment.)  Of course, he's still got the White House briefing room, but that would mean reporters asking him unfriendly questions, and that always leads to him running away, so of course he doesn't see that as an option.

Congress was briefed on multiple possible threats to Congress between now and Inauguration Day.  We urge the powers-that-be to scrap whatever the plans are for Joe Biden and Kamala Harris on the 20th and instead have the inauguration ceremony held from an undisclosed location.

The Joint Chiefs of Staff issued a statement yesterday condemning last week's riot and reminding members of the military that their obligation is to the U.S. Constitution, not an individual person.  That the top military leaders were forced to do this is a frightening warning about this country's future.

Representative Alexandria Ocasio-Cortez said last night that she was in fear for her life during last week's mob assault on the Capitol.  The progressive leader, who is vilified on a daily basis by conservatives, said that a specific incident led her to wonder if she was going to die during the attack.

There are House Republicans complaining about now having to go through metal detectors to enter the chamber.  1) That's not how you "calm down the rhetoric" a week after a violent assault on the government; 2) Anyone who objects to confirming they aren't bringing a weapon onto the floor should be considered an immediate security threat and expelled;  3) These fragile snowflakes should have a long talk with every student who has to do the same thing because Congress refuses to take any action to stop school shootings.

Cheers to 18-year-old Helena Duke who identified her mother, aunt, and uncle for authorities after they were involved in a violent confrontation the night before the riot last week.  Duke referred to herself as, "the liberal lesbian of the family who has been kicked out multiple times for her views and for going to BLM protests,” and all we can say is, karma is amazing.

Lisa Montgomery became the first woman executed by the federal government since 1953 early this morning, as the bloodlust of the Trump administration continues to spread in every direction in its final days.

The United States set yet another record for daily cororonavirus-related deaths yesterday, when over 4,300 Americans died on Tuesday.  There's a lot to keep up with these days, friends, but we have to stay focused:  Please continue to wear your masks and practice social distancing wherever possible.  We've lost more than 380,000 people during this pandemic, and at this rate we'll be close to 450,000 deaths by the end of January.

Shame on the U.S. Supreme Court for reinstating a Trump administration rule requiring women to pick up their mifepristone prescriptions in-person in the middle of a pandemic.  Other drugs have been given an exemption from the rule during this crisis, and there's no legitimate medical reason for the so-called "abortion drug" to be treated differently.  Hopefully the Biden administration will suspend the rule again, but this is just another example of the conservative court's never-ending assault on women's health.

The Boston Celtics have now had three straight games postponed because they don't have enough players, thanks to a recent coronavirus outbreak on the team.  It could easily become four games, with the C's scheduled to face the Orlando Magic on Friday.

We don't use Netflix all that often, but the streaming giant just announced they'll be releasing new movies every week this year, so maybe our engagement level will pick up a bit, at least for the start of 2021.  Check out the teaser trailer below for a peek at some of the stars who are involved with these films:

Former Van Halen bassist Michael Anthony said he briefly spoke with Alex Van Halen after Eddie Van Halen's death, but he was never able to reconcile with the late guitarist before his passing last year.  We still don't understand what caused this rift.  Everyone in rock music seems to regard Anthony as one of the nicest guys in the industry.  However, going by former Van Halen manager  Noel Monk's book Runnin' With the Devil, the Van Halen brothers, or at least Eddie, seemed to have it out for their bassist for close to 40 years, even before Sammy Hagar entered the picture, for no obvious reason.

Okay kids, that's going to do it for now.  We're taking a trip in the wayback machine for this tune that will leave you in a mood to dance, because we can all use more of that vibe.  Here's Dusty Springfield with her 1963 hit, "I Only Want to Be with You" for today's, "Song of the Day."

Thanks for stopping by, everyone.  It was great to see you, as always.  We're not sure if NBC's "One Chicago" programs will actually return tonight, or if they'll get bumped again for the latest breaking news.  Either way,  you're welcome to come back later and watch whatever is on with BDH and Little Buddha.  Otherwise, enjoy the rest of your day, stay safe, and we'll catch up with you again soon.  Until next time, that's today's Clearing out the Clutter, and we are outta here.