Welcome back!  How are you?  My foot is still bothering me, although not as much as yesterday, so our medical professionals (i.e. BDH and Little Buddha) want me to continue trying to stay off it while also having another Advil.  I should have asked if these two take my health insurance.  Other than that, it's business as usual here at the moment, so let's get down to work.  The guys just made coffee, so grab yourself a nice medium DD, because it's time to clear out some Wednesday Clutter.

The Georgia Senate runoff election results are off to a great start: Rev. Raphael Warnock is the projected winner over Senator Kelly Loeffler.   It's clear that Black voters once again handed the GOP another defeat, which is why Republicans fight so hard to suppress voter participation.  Senator Loeffler will now head back to D.C. to disenfranchise her entire state when she objects to certifying Georgia's presidential election results later today.  Good riddance to a racist and corrupt officeholder.

Meanwhile, Jon Ossoff has a razor-thin lead over Senator David Perdue (50.2% - 49.8%) with 98% of the votes counted.  That one will probably see a recount either way, but we are this close to being able to say "Senate MINORITY Leader Mitch McConnell," which would feel like a bonus Christmas present.  There will be all sorts of analysis after the dust settles, but there's no doubt Donald Trump was a prominent factor in both races.  Did he drive Democratic turnout to another level?  Did Republican voters take him at his word that the election was rigged, or will some of them just not show up if he's not on the ballot?  Perhaps a little bit of everything?  Whatever the case, it would be a new level of karma for Trump to cost Republicans control of the Senate after they spent four years enabling him. 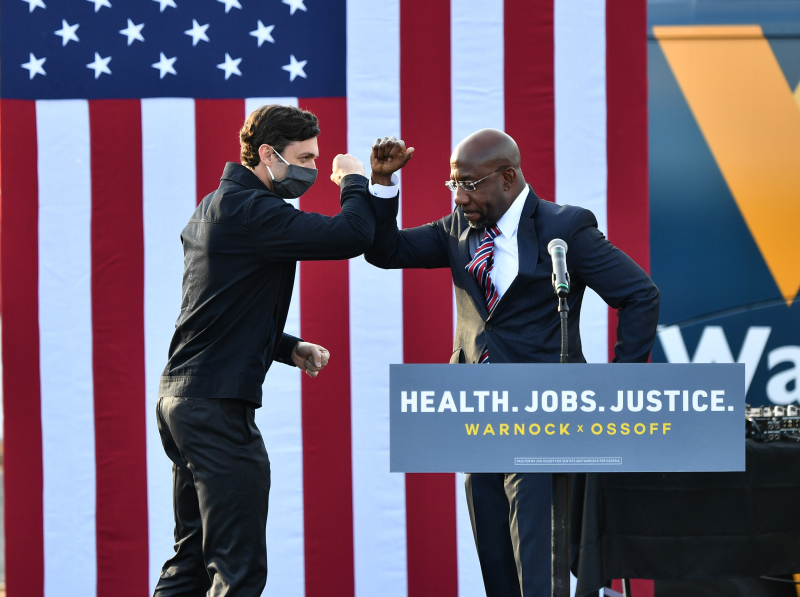 One down, one to go.  (pic via newsweek.com)

Let's review one more time:  Vice-President Mike Pence has no authority to overturn any Electoral College results during today's certification process, no matter how many times Donald Trump falsely insists otherwise.   Pence knows it, Senators Josh Rawley, Ted Cruz, and the rest of the GOP traitors know it, and if Trump doesn't actually know it, he's even more dim-witted than we've already established.  The presidential election results have no chance of being changed today.  Donald Trump is going to lose yet another fight.  The biggest danger from this nonsense is that it undermines the credibility of what was a legal and proper election, and it leaves the country more susceptible to a successful coup by a smarter group of politicians down the road.

A new report estimates that roughly 40% of Donald Trump's judicial appointees have a demonstrated anti-LGBTQ bias.  Appointing these judges was Mitch McConnell's top priority for the last four years, rather than helping ordinary Americans in any way.  President-elect Joe Biden must prioritize addressing this prejudice when he selects his own nominees.

Kenosha County District Attorney Michael Graveley announced yesterday that police officer Rusten Sheskey will face no criminal charges for shooting Jacob Blake in the back seven times last year.  Once again, the state makes it clear that criminal behavior by the police against black men will go unpunished.  We wish this was surprising in the least, but we all know that's not the case.  That's just one more reason why the Black Lives Matter movement exists, is important, and will continue to work for the justice that has been so-long denied.

It's been almost two weeks since the Nashville bombing, and the FBI still can't bring itself to call it a "terrorist act" because they know they'll anger Donald Trump and his supporters.  Two weeks left until Inauguration Day.  Just two weeks.

Boston Mayor Marty Walsh says the city is extending its coronavirus-related restrictions for another three weeks, as the city's case numbers continue to rise.  Indoor dining is still allowed (with a 90 minute time limit), which continues to strike us as hypocritical.  We understand that the remaining restaurants are hanging on by a thread, but it's still a complete contradiction to (rightfully) stress the importance of avoiding crowds while implying indoor dining is a safe activity.  We should be paying these businesses to shut down until the situation improves.  It will probably be another six months before we would even begin to consider eating inside.  It would be nice to think there's some chance we'd finally be able to return to the gym at some point this year, maybe in late summer or early fall.

The NFL regular season has only been over for three days, and the New England Patriots are already taking their first big hit with the news that the Houston Texans plan to name Nick Caserio as their next general manager.  It's not a surprise, since Houston tried to hire Caserio last year, but now we're wondering who will work with Bill Belichick on the major rebuilding that New England faces this off-season?

Will the NFL have to consider postponing a playoff game because of the coronavirus?  We may find out the answer soon, because the Cleveland Browns are dealing with an outbreak ahead of their game wild-card game against the Pittsburgh Steelers, which is currently scheduled for Sunday.  Browns head coach Kevin Stefanski, two other coaches, and two players all tested positive, and the team was forced to shut down its practice facility yesterday.  The guess here is that the league would make Cleveland play with all practice squad players and a local high school coach before they'd reschedule this game.

We're sorry to hear that Dr. Dre was hospitalized for a brain aneurysm, but it sounds like the hip-hop legend/mogul is already feeling better and expects to be out of the hospital soon.  Best wishes for a full and speedy recovery.

This year's Grammy Awards are being postponed until March 14, because of the current state of the coronavirus pandemic in Los Angeles County.  The show was originally scheduled to air on January 31.  Here's hoping it won't need to be rescheduled a second time.

Neil Young sold 50% of his publishing rights to Hipgnosis for a reported $50 million.  Selling these rights seems to be the "in thing" these days, as Bob Dylan, Lindsey Buckingham, Stevie Nicks, Richie Sambora, and others have done the same in recent weeks.  We asked the Clutter investment team if this was something we should be looking into buying.  They just smiled at us, said it would be a long time before we would ever be in a position to consider that, and suggested we go back to reading with BDH and Little Buddha.  Sounds good.

Speaking of things to do with the guys, "One Chicago" returns to NBC tonight!  BDH and Little Buddha will love that.  The new season was only two episodes long before all of the shows went on a holiday hiatus.  Hopefully this stretch will last longer than that before the next round of repeats begins.

We just watched this trailer for Regina King's new movie, One Night in Miami, which looks terrific.  The film premieres on Amazon Prime Video on January 15.  Have a look:

Hey David Hasselhoff fans, have we got an auction for you.  That's right, you can bid on an oversized lifelike replica of the Hoff, or his own personal KITT car.  Or you could send us the money you would bid on these items to help us increase our coffee budget.  It's all about having options.

Let's try this one more time.  Actress Tanya Roberts died on Monday night, after the announcement of her death was mistakenly made earlier that morning.  The cause of death was said to be a urinary tract infection.  Ms. Roberts was 65 years old.  Our condolences go out (again) to her family and friends.

Okay kids, that's going to do it for now.  Here's Dr. Dre and Snoop Dogg to close things out with, "Nuthin' But A G Thang," for today's, "Song of the Day."

Thanks for stopping by, everyone.  It was great to see you, as always.  Of course BDH and Little Buddha say you're welcome to come back to watch "One Chicago" (and hopefully celebrate Jon Ossoff's Senate win) with them tonight if you like.  Otherwise, enjoy the rest of your day, stay safe, and we'll catch up with you again soon.  Until next time, that's today's Clearing out the Clutter, and we are outta here.