Welcome back!  How are you?  Yes, 2021 seems just as crazy and stressful as 2020 so far, which isn't fun.  However, BDH and Little Buddha are excited to announce that our new limited-edition T-shirt is here!  The guys put a lot of work into that one, and they hope you enjoy it.  It's only available until January 26, so don't miss out!  In addition to the shirt, our crew is happy because it's Tuesday, and that means a trip to check out the new releases at the bookstore.  They have about 100 pages left in their current book, so I need to start looking for the next one.  Let's sort through the headlines first.  The coffee is ready, so grab yourself a nice medium DD, because it's time to clear out some Clutter.

The House is expected to vote today on a resolution calling for Vice President Mike Pence to invoke the 25th Amendment within the next 24 hours.  If Pence doesn't do it, or if Donald Trump doesn't resign, the House will vote Wednesday morning to impeach Trump for a historic second time.  The man incited a violent mob to attack the government.  Legal charges need to be awaiting him after he leaves office, but he's an immediate danger to the United States, and the House must hold him accountable for his criminal behavior right now.  We also need to see every last Republican who is willing to forever be recorded in history as supporting insurrection.

Donald Trump has been warned by aides he may face civil liability because of his role in last week's riot.   (We would say that's a given, no?)  With any luck, those lawsuits would take every last dollar Trump has conned out of his followers since November.  Trump was reportedly further warned that if he pardons himself, it could increase his liability.  His response?  To have a tantrum, which is par for the course with this overgrown spoiled man-child. 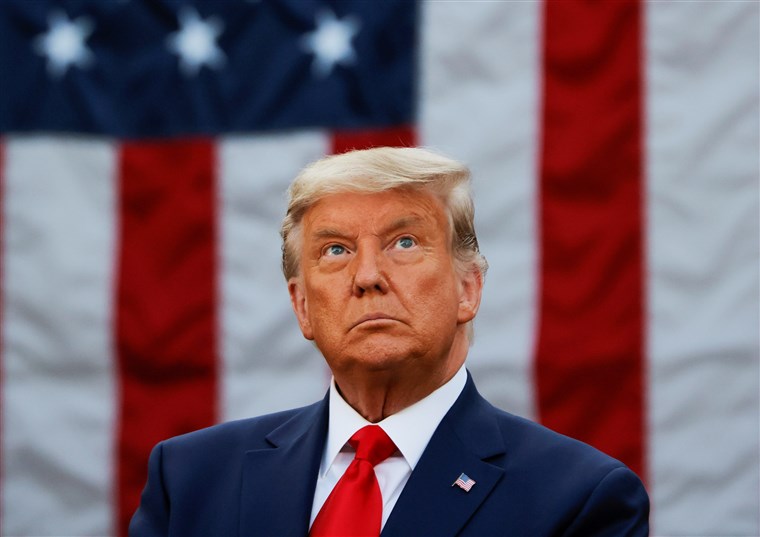 Consequences are coming for Donald Trump.  (pic via nbcnews.com)

Two House Democrats have now tested positive for the coronavirus after being exposed while they were in the secure location during last week's mob attack.   Republicans who supported Trump's election lies and lit the match to this fire should be expelled from Congress.  That removal should also include politicians who refuse to follow safety protocols and wear a mask, especially when social distancing isn't possible.  They're intentionally threatening their colleagues' health, and that's unacceptable.

Donald Trump and Mike Pence reportedly met yesterday for the first time after Trump sent a mob after Pence last week.  We've seen the following account of their conversation in a number of places:

A senior administration official told CNN they met in the Oval Office, had what was described as a good conversation and discussed the week ahead while "reflecting on the last four years of the administration's work and accomplishments."
"They reiterated that those who broke the law and stormed the Capitol last week do not represent the America First movement backed by 75 million Americans, and pledged to continue the work on behalf of the country for the remainder of their term," the senior official said.

Sorry, there's just no way that's how the conversation went.  Your boss tries to have you killed, and you say, "Hey, we had a helluva run?"  That defies belief.  It's a blatant lie, and any reporter who mindlessly repeats it is doing the country a huge disservice.
An increasing number of corporations say they're pausing campaign contributions to Republicans who supported Donald Trump's election fraud.  If the GOP won't do the right thing for the good of the country, maybe threatening their money access will motivate them.
The FBI is warning about the potential for armed protests at all 50 state capitols and the U.S. Capitol between now and January 20.  You know, because a pandemic wasn't enough reason by itself to stay home.  If Republicans actually cared about national unity, they'd be telling everyone they lied about the election fraud, instead of trying to prevent Donald Trump, and themselves, from being held accountable for their actions.

Acting DHS Secretary Chad Wolf abruptly resigned yesterday, which is a troubling sign.  Wolf said it was because of recent legal rulings that found he was in the position illegally.  However, that challenge happened months ago, and up until recently, Wolf insisted he was staying until January 20, so what changed?  National security concerns are through the roof right now, and he just bails?  The immediate concern is that he's going to be replaced with someone willing to do something for Trump that Wolf wasn't, and that's not good.

Deutsche Bank is finally cutting ties with Donald Trump in the wake of last week's mob.  The Trump Organization currently owes the bank about $340 million, and they have to know there's a good chance they won't get their money back after Trump leaves office.  Deutsche Bank was one of the last financial institutions still willing to do business with Trump, so who will finance him in the future besides the MAGA cult?  The bank is also likely to be a key player in Trump's pending legal battles, so stay tuned.

It's been 70 days since the election, and Facebook is finally banning the "stop the steal" conspiracy theories from the site.   It only took one violent mob trying to overthrow the government for them to take action.  Thanks for playing, guys.  Mark Zuckerberg knows Facebook is likely facing new regulations from Democrats, as well as their antitrust lawsuit, and he's trying to pretend that Facebook hasn't been enabling Team MAGA the entire time.

Parler is suing Amazon after AWS cut off their infrastructure support.  The right-wing hate site claims the move is a violation of antitrust laws.  We see a company that decided it didn't want anything to do with a company pushing a violent revolt.  Here's hoping the suit fails and Parler ends up having to pay Amazon's legal fees on top of everything else.

We're relieved that New England Patriots head coach Bill Belichick will not accept the Presidential Medal of Freedom from Donald Trump this week, following the coup attempt.  That's going to drive Trump nuts.  Will he turn on Belichick or blame the media?  Let's check out his Twitter account.  Oh, wait... Belichick's statement is so strongly written in the passive voice, it makes us think that perhaps Robert Kraft made the decision for him.  We're fine with that.  It's admittedly hypocritical, but we try to block out that Belichick, Tom Brady, and Kraft have all supported Trump over the last four years.  Otherwise, it would be next to impossible to watch the Pats with Dad Clutter, and we're not giving up those opportunities.

Hey Deadpool fans, we've got a bunch of good news for you:  Work is underway on Deadpool 3, the character will officially be part of the MCU, and he's keeping his R-rating, so no worries about new owner Disney neutering the mercenary.  The only downside is that the next movie probably won't be out until 2023 at the earliest.  Hey, it's good to have something to look forward to, right?  Here's hoping that we'll able to see the film on the big screen, but Deadpool's return would probably be enough to get us to flip on paying for Disney Plus, if we haven't already done it by then.

We're still not getting Hulu right now, but the upcoming movie The United States vs. Billie Holiday looks like it could be terrific.  It stars singer Andra Day as the music icon and comes out on February 26.  Have a look at the trailer:

Okay kids, that's going to do it for now.  Here's Faith No More to close things out with, "Ashes to Ashes" for today's, "Song of the Day."