Welcome back!  How are you?  I know it's Tuesday, but BDH and Little Buddha are still in the first half of their current book, so I think we're going to skip this week's trip to the bookstore.  It's just as well, because I seem to have done something to my foot, and I should probably try to stay off it as much as possible today.  Not sure what happened, but we're going to start with Googling "bruised heel" when we're done here.  Our medical staff also suggests taking Advil, which probably couldn't hurt.  When they're not busy dispensing sound medical advice, these two are focused on making coffee for you.  There's a fresh pot on the counter, so grab yourself a nice medium DD, because it's time to clear out some Clutter.

The Georgia Senate runoff elections are today, with control of the U.S. Senate hanging in the balance, so that's a pretty big deal.  Over three million people have already voted, and it looks like both races will be close.  Georgia has traditionally been red for years, but Donald Trump has managed to make himself a key issue, as he's spent weeks attacking the legitimacy of the state's voting process while he continues to try to steal the presidential election.  Will that provoke enough of a backlash for Democrats to overcome their historical disadvantage and win both races? 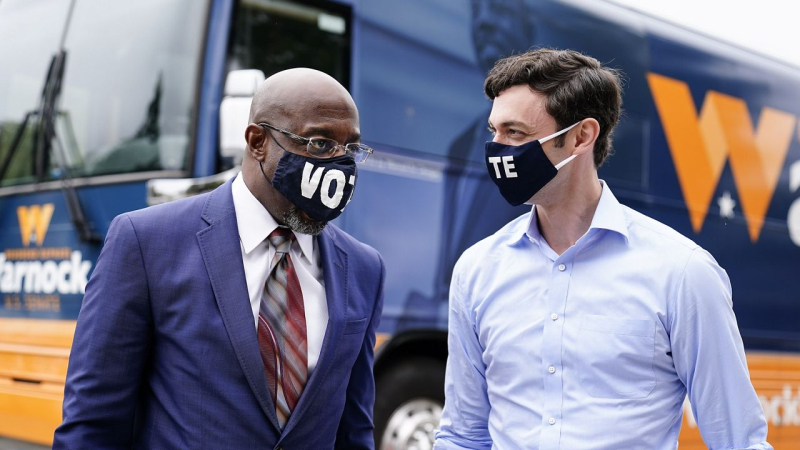 Today's the day for Rev. Raphael Warnock and Jon Ossoff to cross the finish line. (pic via mobilize.us)

One can only hope, because sending Mitch McConnell back to the minority party is as important for this country as firing Trump.  We need a Senate that is focused on helping ordinary Americans, combating climate change, and repairing the damage of the last four years inflicted by McConnell and his associates.  They enabled a traitor in exchange for tax cuts for the wealthy and conservative judges.  Enough is enough.

Donald Trump appeared at a Georgia rally for the Republican candidates last night.   Trump threatened Mike Pence about presiding over tomorrow's certification process, and then continued spewing conspiracy theories in all directions, reflecting the fact that this wannabe fascist has lost his mind.  Imagine how different things might have been if Trump had spent as much time actually trying to do his job as he's done trying to kill democracy in this country.  If he had anyone who cared about him as a human being, they would have made him see a medical professional by this point, but they all see him as a means to an end, which is grabbing power and money from the cult.  Just 15 days left until Inauguration Day, friends.

Why did the U.S. Attorney for Georgia Byung J. Pak suddenly decide he had to resign immediately, rather than wait for the Biden administration to announce his successor?  Was Trump pressuring him to do something?

Washington D.C. Mayor Muriel Bowser is calling in the National Guard ahead of the large pro-Trump demonstrations that are expected to take place tonight and tomorrow.  You know the MAGA thugs are looking to cause trouble, which they will then try to blame on Antifa and the Black Lives Matter movement.  Our hope is that people in the area go out of their way not to engage these fools, the sheep go home afterwards with nothing to brag about, and that no one is hurt over the next 48 hours.

Outgoing Education Secretary Betsy DeVos sent Congress a farewell letter on Monday urging members to reject President-elect Joe Biden's education agenda.  First, will Donald Trump fire DeVos for acknowledging that Joe Biden will be the next president, or is he too terrified of her brother, Blackwater founder Erik Prince, to even comment on her letter?  Second, DeVos has been a disaster for our nation's schools, and her pending departure is one of the biggest benefits of this administration ending on January 20.  Her letter should be tossed in the trash without a second thought.

The coronavirus pandemic has hit Los Angeles County so hard that ambulance crews are being told not to transport patients with little chance of survival, because the hospitals are at capacity.  This doesn't even factor in the post-holiday surge that's expected to happen across the country over the next few weeks.  Life in America, folks.  This is a disaster that could have been avoided with competent political leadership.  Those responsible for these deaths should be held responsible for their malicious actions.

The United Kingdom is entering another lockdown, as the area is slammed again by the coronavirus.  The shutdown is expected to last until at least mid-February.  It can not be stressed enough - the vaccines will help lead us out of this pandemic, but it will take months for them to have a widespread impact, and we are still in a health crisis right now.  Stay vigilant, wear your masks, wash your hands, and continue practicing social distancing as much as possible.  We're still hopeful the second half of 2021 will be much better, but it's only going to happen if we take care of ourselves and our loved ones in the short-term.

The joint health care venture founded by Amazon, Berkshire Hathaway and JPMorgan Chase is shutting down after three years with little to show for their efforts.  Turns out Whole Foods CEO John Mackey has the solution to any health care issues:  just eat better and don't use the health care system.  Boom.  Problem solved, right?  We assume this means Mackey will be opening stores in lower-income neighborhoods throughout the country and lowering prices.  If the Amazon subsidiary's view reflects the attitude of Haven as a whole, then it's just as well the whole thing was scrapped.  Now let's go back to talking about real solutions like Medicare for All.

It sounds like Major League Baseball expects both spring training and the regular season to start on time at this point.  We miss our annual trip to Fort Myers.  Hopefully it will at least be an option in 2022.  Even if the season starts on time, there's no way many/any fans will be allowed in the stadiums in the beginning, and then there will likely be limited crowds for most of the rest of the year.  The current over/under on how many games we'll be able to see at Fenway Park this year is 3.5.  We'd take the under.

After yet another disappointing season for the Denver Broncos, team boss John Elway announced he'll be the president of football operations and hire a GM to handle personnel decisions for next season.  The press release was a beautiful spin job to make it sound like this was a promotion for Elway, instead of an acknowledgement that he's been failing in his current job for years.

Friends, we try to stay reality-based here.  Our crew searches legitimate news sites trying to find you interesting tidbits, and we make it clear when we engage in our own speculation.  Our record speaks for itself, but there are occasional bad calls, like yesterday's blurb that actress Tanya Roberts recently died.   Apparently Ms. Roberts is in fact still alive, as we, and many others, wonder how the original story was released by her publicist in the first place.

Okay kids, that's going to do it for now.  Here's Guster to close things out with, "Do You Love Me" for today's, "Song of the Day."