Welcome back.  Yesterday started off like pretty much any other Wednesday.  We hung out with you for a bit and then did a couple of errands later in the morning.  It was business as usual until we decided to watch a few minutes of the Electoral College certification process, and then all hell broke loose about five minutes later.  After that, BDH, Little Buddha, and I spent the rest of the day glued to the TV while also refreshing Twitter every 30 seconds until it was time for bed.  There's an enemy of the country living in the White House, and the country shouldn't be subjected to his delusions for another 13 days, but we'll get to that in a second.  The guys say the coffee is ready, so grab yourself a nice medium DD, because it's time to clear out some Thursday Clutter.

Let's start with this:  Congress certified the 2020 presidential election results early this morning.  Let there be no doubt for anyone:  Joe Biden and Kamala Harris will be sworn into office on January 20, 2021.  Even Donald Trump was finally forced to publicly acknowledge reality after the certification and admit that his term is coming to an end.  He'll never stop lying about what happened, but he knows he's leaving in 13 days.  This is reality.  There is no disputing it.

Now, to review what happened before the certification:  Yesterday was a dark day in U.S. history as Donald Trump's supporters stormed the U.S. Capitol building in an attempt to stop the certification process from happening.  It was a frightening sight, as these cult followers engaged in treason and insurrection in a violent attack on the government, having been egged on by Trump himself at their rally earlier in the morning.  It was a riot that U.S. leaders would have condemned if it had happened in any other country.

It was also an act of domestic terrorism born of pure white privilege.  These people have worked themselves into a frenzy that they were somehow ripped off when their candidate, who never had the support of a majority of the country in the first place, lost an election.  It's beyond their comprehension that there was no fraud.  They just lost.  Candidates lose all the time, but these people can't accept defeat.  This movement originated in response to a Black man being elected president,  and the idea that black voters defeated them has them in a frenzy (with Trump and his accomplices fanning the flames at every turn.)  To think that the proper response to a loss is to violently overtake the Capitol Building, with no fear of repercussion, is the epitome of privilege. 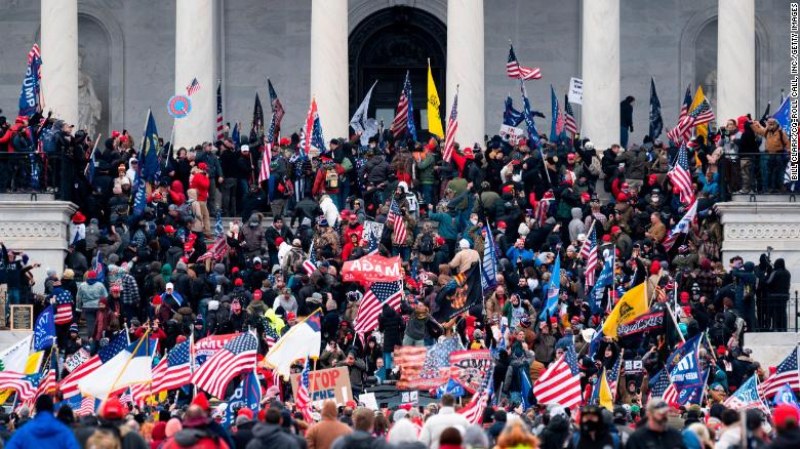 A stain on America.  (pic via cnn.com)

That brings us to the issue of security.  It defies belief that the Capitol Police were "caught off-guard" by the protestors.  Everyone knew something like this was coming yesterday.  Yet, the mob came right into the building with little to no resistance and occupied it for hours, finally leaving more by their own volition than by any law enforcement.  There are videos online of the police letting the protestors in past the gates, and at least one officer took selfies with them.  Being inexcusably unprepared is the best-case scenario here, but complicity looks much more likely, and it warrants investigation.  Anyone who still wants to argue that white privilege doesn't exist should think long and hard about how different this would have played out if these were Black Lives Matter protestors.

Order was finally restored in the evening, about seven hours after the riot began, with no help from Donald Trump.  Apparently the National Guard was finally deployed after Mike Pence gave the order, because why would Trump want to stop something he created?  The only messages he sent out during the riots boiled down to, "Um, violence is bad, but I love what you're doing.  They stole the election from us, and you're all patriots."  His job is to keep the country safe, and instead, he kept pouring gasoline on the fire.  It was enough to finally get him locked out of Twitter for 12 hours, a move that is long overdue.

There's no reason to believe yesterday's mob was the end of Donald Trump's carnage between now and Inauguration Day.  He is an immediate threat to national security, and he should not be allowed to terrorize us again between now and January 20.  We also must let future presidents know there will be repercussions if they attempt anything like this.  Whether it's by impeachment or enactment of the 25th Amendment, Trump should be removed from office immediately.

His Republican accomplices must also never be allowed to distance themselves from the nightmare of the last four years.  They repeatedly enabled a man who incited a violent attack on the U.S. government.  There must be consequences for their actions.  As a prime example:  Mick Mulvaney is resigning as special envoy to Northern Ireland after yesterday's riot.  Mulvaney is one of Trump's former chiefs of staff, and he is as guilty as anyone of implementing the terror of the Trump administration.  There's no nobility here.  Mulvaney sees this as the start of whitewashing his culpability.  Never let him get away with it.

Jon Ossoff was declared the winner of the other U.S. Senate runoff election in Georgia yesterday.  Along with Rev. Raphael Warnock's win, that gives Democrats control of the U.S. Senate (thanks to Vice President-elect Kamala Harris serving as a tie-breaking vote) for the next two years.    Mitch McConnell finally gets his demotion to Senate Minority Leader, and the expectations for President-elect Joe Biden's legislative agenda are now considerably higher.   It's remarkable that a Black minister and young Jewish guy from Georgia are ushering in a brighter day for the United States.

President-elect Joe Biden is expected to nominate Judge  Merrick Garland to be his attorney general. Garland is of course the former Supreme Court nominee that Senate Republicans refused to hold confirmation hearings for when they stole a seat in 2016.  He's described as a moderate, who should be able to be confirmed this time (thus emphasizing the corrupt nature of the GOP's previous snub.)  Many would have preferred a person of color or a woman to hold the position, but there seems to be little doubt that Garland would be exponentially better than Bill Barr and Jeff Sessions before him.  Granted, that sets the bar about an inch off the ground, but you have to start somewhere.

It's déjà vu all over again:  The United States set yet another new daily record with 3,865 reported coronavirus-related deaths yesterday.  That pushes the current fatality total to over 360,000, and experts warn we could break 430,000 by the end of the month.  The U.S. must dramatically ramp up the vaccination rate, as this pandemic continues to run rampant across the country.

Good for the Boston Celtics and Miami Heat for taking a knee during the national anthem last night in protest of the latest examples of racial injustice suffered at the hands of police.  This current Celtics team is not shy about expressing its support for racial equality, and they're a terrific example for others to follow.

LeBron James wants to buy out soon-to-be-former Senator Kelly Loeffler's ownership stake in the Atlanta Dream WNBA basketball team, which sounds like a terrific idea to us.  It took great courage for those players to publicly endorse Rev. Warnock instead of their boss, and they deserve a new owner who respects them.

Of course, yesterday's terrible events in Washington forced NBC to push the return of "One Chicago" back to next week.

Miley Cyrus is apparently working on a Metallica covers album, and you know what?  Our guess is that it will be good.  Miley has demonstrated a strong rock side over the years.

Okay kids, that's going to do it for now.  Here's the legendary Sam Cooke to close things out with, "A Change is Gonna Come" for today's, "Song of the Day."

Thanks for stopping by, everyone.  It's always great to see you.  BDH and Little Buddha say you're welcome to come back and read with them for a while if you like.  Well, that's the plan unless there's another major news event today, in which case you can watch TV with them.  Otherwise, be good, stay safe, and we'll catch up with you again soon.  Until next time, that's today's Clearing out the Clutter, and we are outta here.