Welcome back!  You know, this site is a little over 11 years old now, so that means we spent about six to seven years writing for it it without having to talk about Donald Trump at length every day.  That seems like centuries ago, but we're excited to do it again.  What a treat to no longer have to discuss his every offensive and treasonous action, unless of course we're discussing the next development in his many legal problems.

We kept waiting for something to go wrong yesterday before Joe Biden and Kamala Harris finally took their oaths of office.  Some last trick, some attempt at revolt.  Something that would extend the nightmare.  However, everything went smoothly, and BDH and Little Buddha were grinning for the rest of the day.  Here's to the adults being back in charge.  Hold on...the guys say we should also celebrate the fact that we have coffee.  Fair point.  Grab yourself a nice medium DD, because it's time to clear out some Thursday Clutter.

(Reminder:  Our new T-shirt is only available until Tuesday the 26th, and then the shop closes again!)

An inspiring new chapter in the story of the United States began when President Joe Biden and Vice President Kamala Harris were sworn into office yesterday.  Harris becomes the first Black female South Asian vice president in the country's history.  If you listened carefully, you could hear the sound of glass ceilings being shattered as she took her oath.  It was a wonderful moment for children to witness, and we can't wait to hear all of the future stories about how this day influenced the next generation.  President Biden gave an impassioned address, calling for unity, civility, and a return to honesty in government.  However, he also called out white nationalism as a threat and said his administration will not tolerate it. 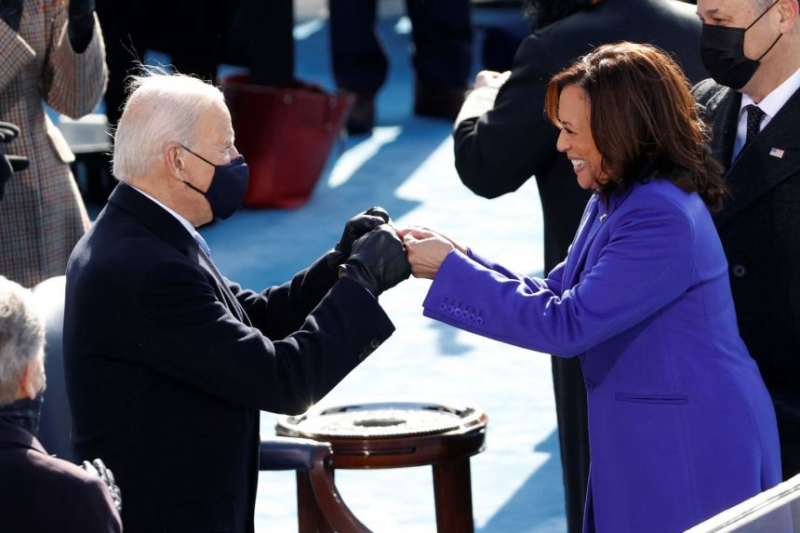 The United States charts a new path.  (pic via straitstimes.com)

Lady Gaga, Jennifer Lopez, and Garth Brooks all sang during the inauguration ceremony, and they were terrific.  However, inaugural poet Amanda Gorman was amazing.  The 22-year-old says she wants to run for president herself some day, and we would not bet against her.  In case you didn't see it, here's the full clip of her reciting, "The Hill We Climb."

President Biden wasted no time getting to work after the ceremony was over.  He signed 17 executive orders covering issues including the coronavirus pandemic, climate change, immigration, human rights, and more.  Just like that, the United States has rejoined the World Health Organization and the Paris Agreement, and halted the Keystone XL Pipeline and construction of the border wall.  In addition, the federal government now emphasizes wearing masks to control the spread of the coronavirus, and in fact mandates it in federal buildings.  Belief in science is back, and that's a huge win for the American people.

President Biden is of course facing many challenges.  One of the most immediate ones is that the previous administration apparently left behind no coronavirus vaccine distribution plan.  Unfortunately, that's not surprising in the least, but it does reemphasize how important it is that the United States now has a competent president who actually wants both the job and what's best for Americans.

That disarray is one of the reasons we're happy to see Dr. Anthony Fauci back in the public eye, as he reiterated the U.S. renewed support for the World Health Organization earlier today.  It's exciting to have pro-science leaders running the show again.

There was a White House press briefing last night, and it was extraordinary for how routine it all seemed.  New press secretary Jen Psaki was cordial with the reporters, and she promised a return to daily briefings, as the Biden administration strives for accountability.  That's a sentence that never came close to being written over the last four years.  She reviewed President Biden's first day in office, gave specific answers to some questions and deflected a bit on others.  However, at no point did she demonstrably lie, nor did she ever refer to the press as "enemies of the state."  When it was over, she told the reporters they should do it again tomorrow.  It was all as normal as those events get, and it was a welcome sight.

Senator Chris Coons (D-Delaware) says Joe Biden will run for a second term.   That was one of the questions press secretary Jen Psaki tried to sidestep last night.  There will be a lot of people from both parties watching to see if/when President Biden files his re-election paperwork.

Let's be clear:  Fashion commentary is not in our wheelhouse, but it seems like former First Lady Michelle Obama and Senator Bernie Sanders attracted the most attention for their outfits yesterday, albeit for very different reasons.

It sounds like Inauguration Day forced some QAnon conspiracy theory believers to finally start realizing they were lied to for years.   We're not experts in cult deprogramming, but we hope these people are able to find a safe way back to reality, and that they'll someday figure out why they fell for this nonsense in the first place.

Meanwhile, the three new Democratic senators were also sworn into office yesterday, thus officially giving Democrats control of the chamber (including Vice President Harris' tie-breaking vote.)  The three men each made history of their own, as Raphael Warnock became the first Black male Democratic senator from the South, Jon Ossoff became the first millennial senator, and Alex Padilla became the first Latino senator from California. Everywhere you looked yesterday, the federal government started looking more reflective of the country.  As a bonus, we can now refer to Mitch McConnell as the Senate MINORITY leader, so that's yet another win.

We were all told that the stock market would collapse if Joe Biden was president, but the S&P 500 rose 1.39% on its way to a new all-time high yesterday.  The Clutter investing team thinks Wall Street will be fine under the new administration, but the important part is bringing more assistance to Main Street as soon as possible.

Quarterback Philip Rivers announced his retirement after a 17-year career yesterday.  Rivers spent 16 of those years with the Los Angeles Chargers before playing one year for the Indianapolis Colts.  We can't figure out exactly what to make of his career.  He's fifth on the all-time passing yards list and eighth on the career wins list.  We're sure he's heading to the NFL Hall of Fame, but his stats just don't have the impact on us that we would expect.  The passing yards feel like they reflect the league's heavy reliance on passing in the modern era more than anything else, and the wins just feel like longevity markers.  Are we being too hard on the guy?  In any case, congratulations to Rivers on all of his success, and we wish him good luck in his future endeavors.

Kyrie Irving decided to return to the basketball court last night after missing the last seven games for undisclosed reasons, but the revamped Brooklyn Nets still lost 147-135 in double-overtime to the Cleveland Cavaliers last night.

It sounds like The Black Widow might be delayed again.  The movie is currently scheduled to be released in May, but that may be too optimistic, given the current state of the pandemic.  We wouldn't consider going to a movie theater in the next four months.  Any time this year before at least October or November seems unlikely.  Looks like we'll probably have to wait for Scarlett Johansson and company to show up on a streaming service option at some point down the road.

Okay kids, that's going to do it for now.  We've been waiting to break this one out for a little while now.  Here's Bruce Springsteen to close things out with, "Better Days" for today's, "Song of the Day."

Thanks for stopping by, everyone .  It was great to see you, as always.  Enjoy the rest of your day, stay safe, and we'll catch up with you again soon.  Until next time, that's today's Clearing out the Clutter, and we are outta here.