Welcome back!  How are you?  We're having a little trouble figuring out this weekend's schedule, so BDH and Little Buddha asked if we could hang out with you today in case we can't do it tomorrow.  I can't say no to those two, so...hi!  I do know that we'll be watching today's NFL playoff games because it's fun to be able to enjoy the drama when you don't care who wins.  Well, we'll watch the first two games, and then some new Trump-related story will probably break in the evening.  For now, let's check out the headlines.  The coffee is ready, so grab yourself a nice medium DD, because it's time to clear out some Saturday Clutter.

The moment millions have waited years for finally came last night when Twitter permanently suspended Donald Trump from using its service.  It's unfortunate this didn't happen about five years ago, because we might have avoided this entire administration, but better late than never.  The social media platform froze Trump's account for 12 hours earlier in the week for violating its terms of service and warned that this would be the consequence of further violations.  Twitter then determined that Trump's subsequent comments, in the context of Wednesday's riot, were adding fuel to rumors of future assaults on the government, and they pulled the plug on him.  We can only imagine the meltdown he had when an aide told him what happened.  Tweeting is like breathing for the Great Pumpkin.  His well-being deteriorates quickly without it. 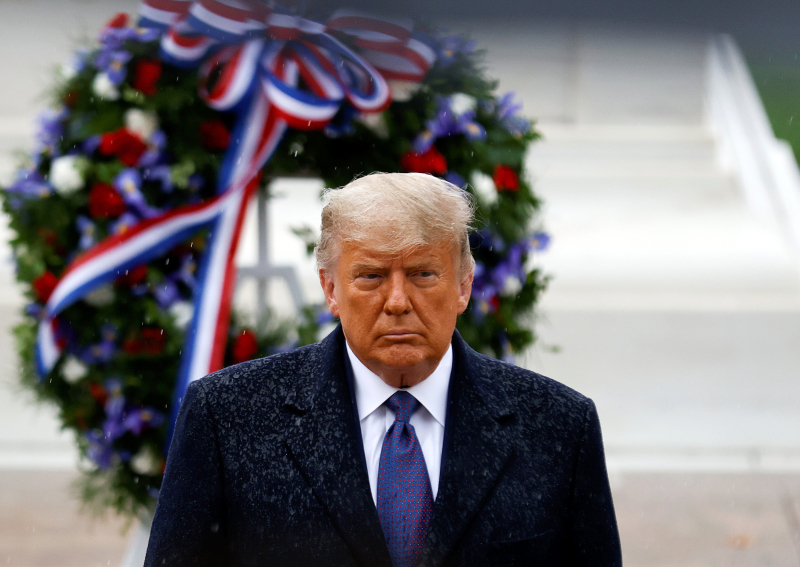 Donald Trump's isolation increases by the day.  (pic via nbcnews.com)

Donald Trump and his cult followers will of course scream about the 1st Amendment, but it doesn't apply here.  Twitter is a private company, and they have every right to decide who can and can not use their service.  On a practical level, Trump isn't silenced in any way.  He's still got the White House website, briefing room, and Oval Office for 11 more days, all of which he could use to speak to the American public, but he'd rather stay on-brand and drown in self-pity.  The overgrown man-child finally lost his favorite toy because he couldn't follow the rules. This might be the first time he's ever actually faced significant consequences for his actions.   It's remarkable how much more pleasant Twitter became immediately after his removal, but there's one thing we can't lose sight of here:

If Donald Trump is too dangerous to be on Twitter, he's too dangerous to have control of the nuclear codes.  The 25th Amendment should already have been invoked, but unless Mike Pence finds a backbone, it's up to the House to impeach him again, which they plan to begin on Monday.  The Senate may draw things out, in which case, that should be hung on Republicans in the next election.  However, it has to be tempting to some Senate Republicans to vote to convict so Trump can't run again in 2024.  In fact, Senator Lisa Murkowski (Alaska) has already become the first Republican senator to support Trump's removal.  Will others follow her lead?

Trump and his supporters have been touting Parler as a right-wing alternative to Twitter, but Google just removed Parler from their app store, and Apple may do the same.  It appears that one can access Parler from a regular web browser, but we'll see how many of these yahoos are able to figure that out.

A new poll says 57% of the country wants Donald Trump removed from office.  The notion that 43% don't think it's necessary, after the man incited a riot against the government, is disturbing, but there's a clear mandate from the majority to do the right thing and kick him out of the White House immediately.

House Speaker Nancy Pelosi said she spoke to Joint Chiefs of Staff Gen. Mark Milley about the precautions in place to keep Donald Trump from ordering a nuclear strike before he leaves/is removed from office.  That's not anxiety-producing or anything.   If Speaker Pelosi is (rightfully) concerned about that prospect, she should have the House begin the impeachment process this weekend, rather than waiting for Monday.

It's also another reason why Mike Pence should already have invoked the 25th Amendment.  We appreciate the trauma he endured this week, especially with reports coming out now that the rioters were talking about killing him.  However, that's why it's all the more inexcusable that he has so far refused to do the right thing for the country so he can attempt to protect his future presidential ambitions.  He's been a lapdog for four years and seems to be committed to the role, even after his master sent a mob after him.

We feel like a broken record, but the United States set yet another daily record for coronavirus-related deaths with more than 4,080 fatalities on Thursday alone.

President-elect Joe Biden said he is preparing a massive new pandemic-related stimulus program which would increase direct payments to $2000, ramp up vaccination efforts, extend unemployment insurance benefits, and provide additional support to small businesses, among other things.  Biden can certainly reach for might higher goals now that the Democrats will be taking control of the Senate.  As bad as things are right now, it's frightening to think of where the country would be if Donald Trump had in fact won re-election and Mitch McConnell was going to run the Senate for another two years.

Like we said, we don't have much vested in the winners of today's NFL playoff games, but let's make a couple of quick predictions:  The Buffalo Bills will take care of the Indianapolis Colts with relative ease.  The Seattle Seahawks will likely do the same to the Los Angeles Rams (particularly because we're not sure who will be the Rams quarterback today.)  Finally, we'd laugh at an upset, and it's not 100% out of the realm of possibility, but Tom Brady and the Tampa Bay Buccaneers will beat the Washington Football Team (WFT) in what will be a surprisingly close game.  Brady and company haven't been good in night games this year, the WFT defense is legit, and the Bucs are still an immature team.  If WFT can somehow find a way to get to an early lead, it could be a game, but we expect TB12 and friends to advance to the next round.

Congratulations to Mookie Betts on getting engaged to longtime girlfriend Brianna Hammonds on Thursday.  The two have been together for 15 years, so this doesn't exactly seem like a rash decision.

We're sorry to hear that Hall of Fame baseball manager Tommy Lasorda died yesterday at age 93.  Lasorda was with the Los Angeles Dodgers in various capacities for a remarkable 71 years.  He was also one of the first baseball personalities we remember seeing as we were first introduced to the sport many moons ago.  Our condolences go out to his family and friends.

Alex Trebek's final Jeopardy! show aired last night, thus lowering the curtain on the late host's 36-year run.  As we've said before, Jeopardy! immediately brings fond memories of Grandma and Grandpa Clutter religiously watching the show every night, so all we can say is, thank you, Mr. Trebek.

Okay kids, that's going to do it for now.  We're feeling a bit of a hair metal vibe at the moment, so here's Whitesnake to close things out with a live performance of, "Still of the Night" for today's, "Song of the Day."

Thanks for stopping by, everyone.  It was great to see you, as always.  BDH and Little Buddha say you're welcome to come back later if you want to watch some football with them. (Maybe you could bring some snacks?)  Otherwise, enjoy the rest of your day, stay safe, and we'll catch up with you again soon.  Until next time, that's today's Clearing out the Clutter, and we are outta here.