Welcome back!  How are you?  Any big plans for the weekend?  It's dark and rainy outside right now, and I think the rain is supposed to last until at least mid-afternoon.  Sounds like a good day for staying inside, maybe doing a little cleaning, watering the plants, and then watching some football.  BDH and Little Buddha think that's a great idea, so I'm definitely on the right track.  Man, it is really coming down out there.  Hopefully we won't lose power.  A weatherman said this would have been a significant snowstorm if it was cold enough, so here's to warmer temperatures.  I know, they're a bad sign for the future of the planet, but we're just not big snow fans here.  Anyway, the guys say the coffee is ready, so grab yourself a nice medium DD, and let's clear out some Saturday Clutter.

(Don't forget to check out our new T-shirt!  It's only available for 10 more days.)

President-elect Joe Biden's proposal to raise the federal minimum wage to $15/hour could lift over 1 million workers above the poverty line, according to the Congressional Budget Office.  This measure is long-overdue, since the wage hasn't been increased since 2009.  It would also help reduce the rampant income inequality in this country by forcing corporations to share more of their profits with low-income workers.  Senate Republicans will of course object to the proposal, because they see no reason why the government should ever help 99% of the country.  Hopefully Democrats will find a way around the resistance to help ordinary Americans. 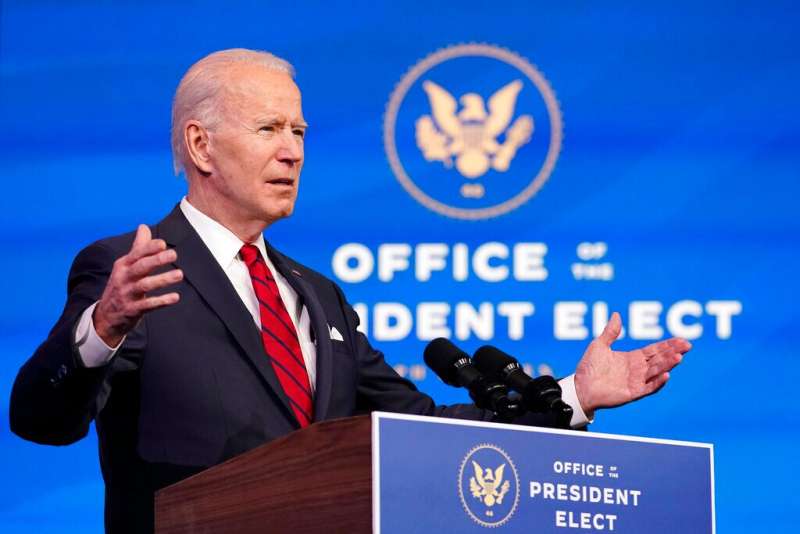 A reset of national priorities is just days away.  (pic via indiatimespost.com)

In just four days, we move from a buffoon who ignored science to disastrous results, to a president who is elevating his science adviser to a Cabinet-level position.  There are brighter days ahead, friends.

Georgia prosecutors are reportedly considering a criminal investigation into Donald Trump's attempts to overturn the state's election results.  Any charges here would be beyond Trump's pardon power.  The path to any sort of national unity depends on clear accountability for criminal behavior, whether it was committed by Trump or any of his cronies as they assaulted our democracy.  Allowing them to escape prosecution would send a clear message to future Republicans that they should try this again, and our country can't condone that.

Meanwhile, the Manhattan district attorney's office reportedly had another long interview with former Trump fixer Michael Cohen on Thursday as part of their ongoing investigation into Trump's business affairs.  Donald Trump is facing a tsunami of legal problems as soon as he leaves the White House for the last time on Wednesday.  He's clearly terrified about what awaits him, which is why he's done everything in his power to destroy to stay in office.our democracy to stay in office.

Vice President Mike Pence finally called VP-elect Kamala Harris on Thursday to congratulate her on winning the election.  You know, the election which was two months ago.  Let's not act like Pence was being noble or something here, just because he's belatedly doing the basics of his job while Donald Trump hides in his bedroom asking why no one loves him.  If Mike Pence wanted to show leadership, he would have invoked the 25th Amendment against a man who sent an angry mob his way, instead of just taking it on the chin to try to preserve his own political future.

Health and Human Services Secretary Alex Azar complained to Donald Trump in his resignation letter that Trump's lies about election fraud, and the subsequent U.S. Capitol riot, "threaten to tarnish these and other historic legacies of this Administration."  Secretary Azar, whose resignation is effective on January 20, seems to accept no blame for the administration's disgracefully incompetent response to the coronavirus pandemic, which has now killed almost 400,000 Americans.  In fact, he tries to take credit for an aggressive response.  Therefore, we're really not interested in anything he has to say about anything else.  His failures should stick with Secretary Azar for the rest of his career.

The Trump administration carried out its 13th execution early this morning, thus concluding this historic bloodbath.  The 13 prisoner murders since the reinstatement of federal capital punishment last year are more than the previous 56 years combined.  They had nothing to do with justice.  The death penalty remains a stain on this country's soul.  We urge President-elect Biden to immediately end this barbaric punishment once he takes office on Wednesday.

The National Rifle Association (NRA) filed for bankruptcy on Friday.  What else is there to say, except that our thoughts and prayers go towards the organization during this difficult time.  Well, we could also say that the NRA is a domestic terrorist trade group whose only concern has been to flood the country with as many guns as possible to increase the industry's profits, and this development is a huge win for the United States.   That's certainly an option.

Wells Fargo reported $321 million in quarterly losses because of customer refunds tied to the bank's many scandals.  We've said it before, and we'll say it again, any remaining customers should quietly walk into their local branch on Monday and calmly transfer their accounts to another bank.  Th next story of Wells Fargo ripping them off isn't a question of "if" as much as it is a "when."  They're the poster child for the United States not taking white collar crime seriously enough.

Let's see, what do we have for today's NFL divisional-round playoff games:  First, the Los Angeles Rams face the Green Bay Packers on the road.  The Rams have a suffocating defense, but with all of the injuries they suffered last week against the Seattle Seahawks, we'll take likely MVP Aaron Rodgers to do enough to get the win at home.  After that, it's the Baltimore Ravens against the Buffalo Bills in Buffalo.  Hmm, that should be a close game, but..we will go with...Josh Allen and the Bills securing one more win on the year before the the Kansas City Chiefs take care of them next week.

Wide receiver Josh Gordon has been indefinitely suspended again by the NFL for violating the terms of his reinstatement under the league's substance-abuse policy.  This is Gordon's sixth suspension, five of which were drug-related.  At this point, we just hope he can find the help he needs.  The guy is only 29 years old.  It's been sad to watch addiction issues derail his career, but maybe he can find a second act which can bring him some stability.

The Boston Celtics finally had enough players last night after a coronavirus outbreak forced the postponement of three games in the past week, and the C's returned in style, with a 124-97 win over the Orlando Magic.

The new NBC shows from Dwayne Johnson and Kenan Thompson will premiere on Tuesday, February 16, so we know what we'll be doing that night.  We've got high hopes for both programs, and it would be nice to have some comedies on our weekly "must-see" list.

Okay kids, that's a wrap.  Country music icon Willie Nelson has an album of Frank Sinatra covers coming out on February 26, so how about we have him close things out with his rendition of, "That's Life" for today's, "Song of the Day."

Thanks for stopping by, everyone.  It was great to see you, as always.  BDH and Little Buddha say you're welcome to come back later if you want to watch the games with them.  We have snacks, but if you want to bring drinks (they could split a Coke), that would be fine.  Otherwise, enjoy the rest of your day, stay dry, and we'll catch up with you again soon.  Until next time, that's today's Clearing out the Clutter, and we are outta here.