(Review) Doctor Who: Revolution of the Daleks

The last time we saw the Doctor, she'd just been told that everything she knew about her history was a lie, and then she was promptly thrown into a maximum security prison, while her "fam" returned to Earth, not knowing if they'd ever see her again.  All of that happened in March 2020, which now feels like 100 years ago.  There's no better way to start a new year than with the return of our favorite Time Lord and company, including Captain Jack Harkness!

(Warning: Many spoilers ahead.)

American businessman Jack Robertson is back, and he's accidentally given the Daleks a path to attempt another takeover of Earth.  Yaz, Graham, and Ryan (who are still readjusting to "normal life") do their best to investigate Robertson, but they really need the Doctor's help.  Fortunately, Captain Jack Harkness busts #13 out of prison, and she reunites with her fam 10 months after they last saw each other.  Yaz has a different take than the others about life without the Doctor, which leads to a heart-to-heart with Captain Jack.  Meanwhile, the Doctor is still processing everything she learned about herself in "The Timeless Children."  However, she puts that aside to come up with a plan to defeat the Daleks once again and prepare for new adventures.  However, not everyone is staying with her.

"Revolution of the Daleks" was a fine start to the new year.  We could use a break from Daleks for a while, but that adventure was sufficient.  The inner conflict of a Doctor's companion can go in all sorts of directions in the future, and there's also still much more ground to cover regarding the Doctor's true background.  Reducing the number of companions, even by one, could go a long way to streamlining stories in the next series.  Overall, we'd give it a B/B+.

Thanks for joining us, everyone.  We hope you have a terrific 2021, and we'll see you back here again when the Doctor and Yaz return for Series 13! 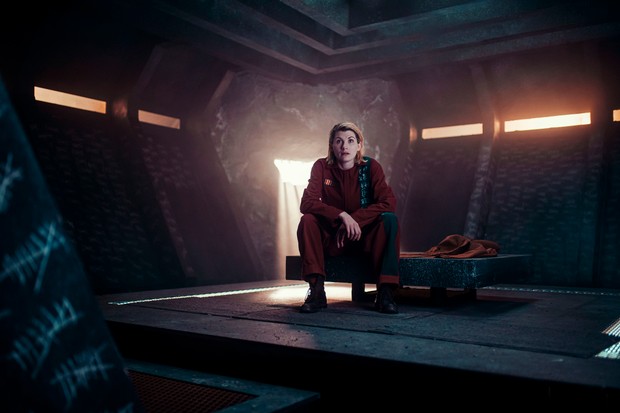 A new fight against an old enemy.  (pic via radiotimes.com)