(Movie Review) One Night In Miami

Oscar-winning actress Regina King has moved into the director's chair, and her first movie, One Night In Miami, is knock-out.  Based on a play by Kemp Powers (and now playing on Amazon Prime Video, plus a theatrical release), the story is based on the fact that Malcolm X, Muhammad Ali (still going by Cassius Clay at the time), Jim Brown, and Sam Cooke were in all in Miami on February 25, 1964, when Clay beat Sonny Liston to become the boxing heavyweight champion of the world.  The film uses that historic event to place these four icons into a cramped and sparse hotel room to debate what it means to be a Black public figure in the United States, and the best way to for them to fight the discrimination that dominates the country.

The actors do wonderful job of making these legends seem like real human beings.   Kingsley Ben-Adir is tremendous as Malcolm X, the outspoken leader who is on the verge of making his break with the Nation of Islam (NOI).  Malcolm is clearly apprehensive about his future and knows he's putting his life in danger.   (He would be assassinated in 1965.)  He is militant about the importance of his mission, and the role his friends play, but you can see he also has his legacy in mind.  There's a vulnerability to the man that pulls the viewer in with every statement he makes.

Eli Goree does a wonderful job as Cassius Clay.  The actor has the boxer's mannerisms and inflections down pat, and it's fun to watch him imitate Clay's taunting and preening.  However, we also see Clay's struggle with his pending conversion to Islam.  He was 22-years-old at the time, and he often acts like an large child while taking to his friends.  However, there's also a thoughtfulness about what the future has in store for himself and the others, and the responsibilities that come with their fame.

Leslie Odom Jr. is fantastic as singer Sam Cooke.  He squares off brilliantly against Malcolm, arguing that his economic independence is just as important as anything the minister encourages, and if that means tailoring his music for crossover appeal, so be it.  However, he knows there's another side to the argument, and the actor makes you feel his internal struggle.   It's also a treat to hear the former Hamilton star perform several Cooke songs.  There's also a sadness in knowing that Cooke would also be killed less than a year later.

Aldis Hodge is terrific as Jim Brown.  He's quieter than the others, but he recognizes the problems as clearly as any of them, and he knows full well that his fame as a NFL running back has its limits.  His comments about how NFL owners see players could just as easily have been made by a current star, even in the modern age of high salaries.  Brown is determined to set his own path, and he clearly has the respect of everyone else in the room.

The film is one hour and 54 minutes long.  The first half moves at a methodical pace leading up to the Clay - Liston fight.  It's the post-fight "celebration" of the second half which is mesmerizing.  The debates about the responsibilities of Black public figures to fight for equality are rich and complex.  Just when you think one of the men makes a definitive argument, another one presents the other side in an equally convincing fashion.  Director King keeps the energy flowing, even though most of the movie takes place in this one small room.  It's an impressive debut, and this will definitely not be her only directing credit.

It's only January, but One Night in Miami will deserve consideration for "Best Picture of the Year."  Highly recommended. 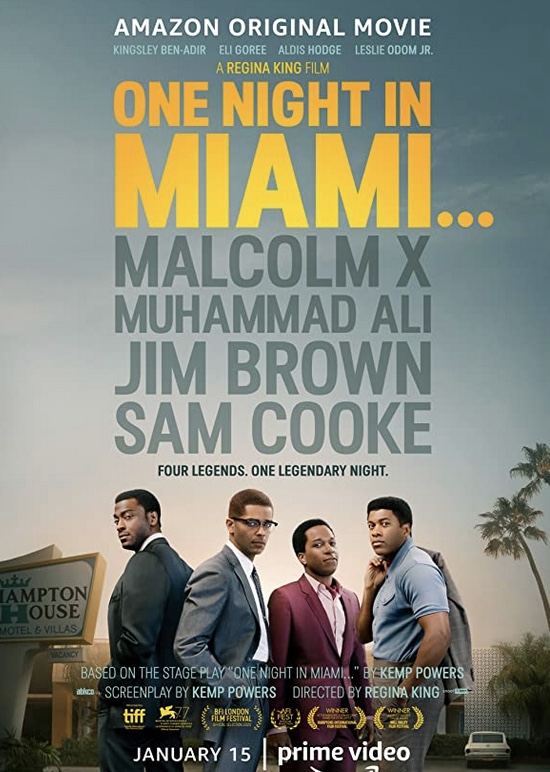