Welcome back!  How are you?  Did you have a good weekend?  Ours was fine, but I'm not sure why it seemed to go by so quickly.  Maybe it's just the continued excitement over it no longer being 2020.  There are a number of items on today's to-do list, but I have to carve out some reading time this afternoon, because BDH and Little Buddha are loving their latest book, which is great.  Of course, the first thing we need to do is check out the headlines.  The guys made coffee, so grab yourself a nice medium DD, because it's time to clear out some Monday Clutter.

With time running out on his White House occupancy, Donald Trump is still looking for ways to steal the election.  Trump tried to pressure Georgia Secretary of State Brad Raffensperger on Saturday to "find" him 11,780 votes to give him the win in the state.  Secretary Raffensperger's staff recorded the call, which was first reported by The Washington Post.  This is the domestic equivalent of Trump trying to pressure Ukraine President Volodymyr Zelensky into starting a politically-motivated investigation of Joe Biden's family.  You know, the call that got Trump impeached.  The House should begin their new session by voting to impeach him again today.  If the GOP had an ounce of credibility, the Senate would vote to remove Trump from office this afternoon. 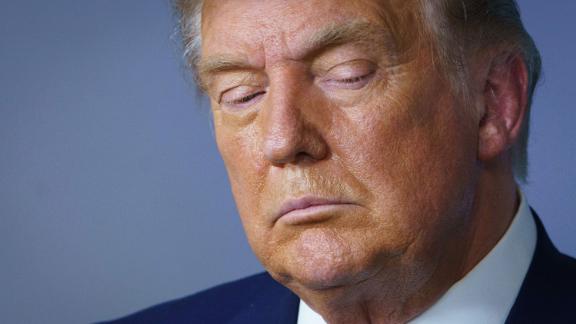 There is no bottom to the corruption.  (pic via kdrv.com)

It seems clear here that Trump's phone call breaks both federal and state laws.   We're not lawyers, and we don't play them on TV, but when the best defense one can offer boils down to, "He is so blatant about it, he may not have known he was breaking the law," it's time for prosecutors to get involved.  Trump's criminal behavior in this instance should be added to the list of potential indictments awaiting him after he leaves the White House on January 20.

The call also makes it crystal clear that the Republican protests against alleged voter fraud are a complete sham.  The only fraud being perpetrated is by Donald Trump and his MAGA disciples.  Again, if the likes of Ted Cruz and his sidekicks had any basic decency, they would drop their efforts of trying to overturn democracy in the United States.  Apologies that we can't remember where we read this suggestion yesterday, but if Mitt Romney wants to demonstrate real courage and principle, he should declare he'll caucus with Senate Democrats if his colleagues don't stop this assault on our elections.

One last thing - just winning Georgia wouldn't give Donald Trump another term.  How many other state officials did he call trying the same approach?  If anyone else has tapes, they should release them now.   Just 16 days until Inauguration Day, friends.

The Georgia Senate runoff elections conclude tomorrow, and both races are expected to be decided by narrow margins.  With control of the U.S. Senate hanging in the balance, will Donald Trump's outrageous behavior have any impact on the final outcomes?  We'd like to think that there are any Republican voters who would be turned off by this corruption, but the more likely question is, will this inspire any additional Democratic voters to vote tomorrow?

All 10 living ex-secretaries of defense signed onto an op-ed calling for a peaceful transition to Joe Biden's administration and reiterating that the military has no role in an election-related disputes.  Let this powerful joint statement quash any ideas Donald Trump may have about trying to involve the military in his coup attempt.   The idea for the bipartisan piece apparently originated with former Vice President Dick Cheney, and that might be the first time we've ever agreed with Cheney on anything.

The House once again chose Nancy Pelosi to be their speaker for the new congressional session that started yesterday.  Pelosi barely beat House Minority Leader Kevin McCarthy by a tally of  216-209, reflecting the losses House Democrats suffered in November.  While we'll take Pelosi over any Republican, we are hopeful that this will in fact be her last term as speaker.  House leadership needs to be shaken up with new perspectives to address the problems this country faces.  The disappointing election results confirm that that Democrats need to offer something better than "business as usual."

Alibaba founder Jack Ma is reportedly missing, according to Yahoo Finance reporter Jessica Yun.  The billionaire has apparently not been seen in public in over two months, which is an ominous sign after his recent battles with China's government.

The New England Patriots beat the New York Jets 28-14 yesterday to finish at 7-9, as the season finally came to a conclusion.  Cam Newton actually had himself a nice game, going 21 for 30 for 242 yards, three touchdowns and no interceptions.  He also caught a TD pass from Jakobi Meyers, so if this is how his stint in New England ends, at least he went out on a positive note.  There are conflicting reports about whether or not Cam will in fact be back next year.  However, Patriots have so many needs on both sides of the ball, his presence or absence won't be the deciding factor about how we feel about the team.  A final record of 7-9 sounds about right for this group.  They could easily have been 4-12 with no breaks, or 10-6 with all of the luck.  Now we have to figure out who to root for in the playoffs.

To the surprise of no one, the New York Jets fired head coach Adam Gase shortly after yesterday's loss to the Patriots.  A 9-23 record over two seasons will do that.

The Washington Football Team (WFT) doesn't have a proper name, and they don't have a winning record, but they do have a playoff spot after beating the Philadelphia Eagles 20-14 last night.  The WFT will face Tom Brady and the Tampa Bay Buccaneers in the Wild Card round next weekend.  We may not be able to help ourselves from rooting for an upset there, not that we're still bitter about Tom Brady's departure from New England or anything.

It's time for the rumors to begin that Doctor Who star Jodie Whittaker plans to leave the show at the end of Series 13.  There's been no confirmation yet, but it has been a recent tradition for the lead to depart after three years, so we wouldn't be shocked if this turns out to be true.  Chris Chibnall would reportedly stay on as showrunner.  If we had our way, he would leave and she would stay.  Whittaker has been good as the Doctor, but she's been given a lot of paper-thin scripts to work with over her first two years.  Anyway, we won't get too far ahead of ourselves here, but it's something to keep an eye on as the year progresses.

We're sorry to hear that Tanya Roberts died after a brief hospitalization.  The actress was known for being a Bond girl, as well as stints on Charlie's Angels and That 70's Show.  A cause of death wasn't released, although it was stated she didn't die from the coronavirus.  Roberts was only 65 years old.  Our condolences go out to her family and friends.

Okay kids, that's going to do it for now.  Here are Salt-N-Pepa to kick off the new week with, "Push It" for today's, "Song of the Day."