Welcome back!  How are you?  Ready for a new week?  Neither are we, but let's do it anyway.  Things got off to a bumpy start here this morning.  No sooner had I gotten out of bed, and the power went out.  BDH and Little Buddha were confused, and they asked if it was something we did.  Thankfully, by the time I finished explaining to them that it had nothing to do with us, the power was back on, and we were able to begin our day.  As BDH said, "That was weird."  I have a couple of errands that need to be done today, but I might wait until this afternoon when we get to the high temperature of 34 degrees.  What is this, early January or something?  In any case, the guys say the coffee is ready, so grab yourself a nice medium DD, because it's time to clear out some Monday Clutter.

Speaker Nancy Pelosi said the House will spend today, and probably tomorrow, focused on a resolution calling on Vice President Mike Pence to invoke the 25th Amendment to remove Donald Trump from office.  If that resolution fails and/or Pence continues to put the country at risk, the House will move forward with impeachment proceedings on Wednesday.  Yes, there are only nine days left until January 20, but Congress can't look at last week's violent mob and simply say, "Eh, no big deal, this will be over next week."  There have to be consequences for inciting domestic terrorism, or else, what's to stop a future White House occupant from doing the same thing?  Senate Republicans should be on board with Trump's removal, whether it's for national security, or their own selfish political interests, but regardless, the House needs to stand up against this threat as soon as possible. 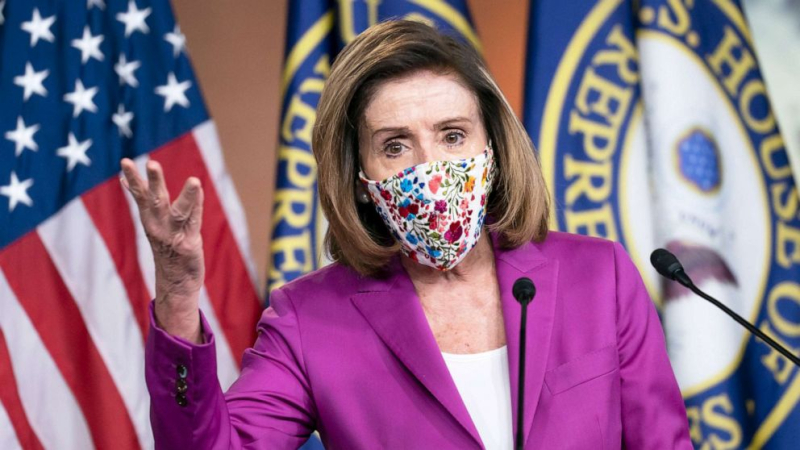 It's increasingly clear that last week's mob was even more dangerous than what we saw on TV in real time.  These traitors set up what appeared to be functional gallows, as well as guns and pipe bombs stashed nearby.   How close did we come to watching executions of our nation's leaders?

As if the riot wasn't bad enough by itself, it also led to several House members and staffers being at risk of catching the coronavirus after being exposed while they were in protective isolation.  The money here says the mob will also end up being a super-spreader event.  Team MAGA really finds every possible way they can to injure Americans.

There are growing concerns that there will be more violence between now and January 20.   We hope that federal and local law enforcement are actually taking steps to prevent it from happening a second time.  It is evident that a number of the mob participants had military and police affiliations, and it's clear they had inside help.  White nationalism has been a growing threat in law enforcement for years, and that will need to be addressed for a long time after Donald Trump is finally removed from power.

Also, the attempted coup took place five days ago, and we still haven't heard any updates about it from any government officials.  Where is everyone?

First Apple and Google took Parler out of their app stores, and now the right-wing hate site is offline after Amazon stopped hosting them.  Let that be the end of Parler and their violent threats.  The MAGA cult will once again yell and scream about 1st Amendment right violations, which is weird, since they've been telling us for years that private businesses can do whatever they like.  Apparently that only applies to whether or not to make wedding cakes for same-sex couples?  Also, Donald Trump can still speak directly to the American public from the White House anytime he likes right now, but we know he's got nothing useful to say after his failed coup attempt.

Melania Trump issued a statement about the riot, and unsurprisingly, she managed to make herself out to be the real victim.  Don't let the door hit you on the way out.  Or do let it hit you, we don't care.  Just leave.

In case you missed it last week, Pennsylvania state Senate Republicans refused to swear in a Democrat who was the certified winner of his race.  There are legal challenges pending about the outcome of that contest, but there was no justification in blocking Jim Brewster from taking his seat in the meantime.  Republicans have launched a full attack on democracy in the United States, and it needs to be stopped.

Senator Elizabeth Warren endorsed Boston City Councilor Michelle Wu's mayoral campaign over the weekend.  That's a big get for Councilor Wu, and it helps her stake out her claim as the progressive candidate in the race.

Boston Police Commissioner William G. Gross is apparently considering running for mayor.  Can't think of what the city needs less at this moment, especially with the lingering anger about how the police handled last year's Black Lives Matter protests. It may end up being a crowded field, but there is no chance voters will let this happen.

Glad to see the PGA cancelled its agreement to hold its 2022 championship event at one of Donald Trump's golf courses next year.  No one should be associating themselves with a traitor.

That brings us to this nauseating story:  Donald Trump is planning on presenting New England Patriots head coach Bill Belichick with the Presidential Medal of Freedom on Thursday.  We made it through most of the season blocking out that Belichick is a Trump supporter, and now it gets shoved in our face yet again.  We can only hope that there is enough bad press for the New England Patriots between now and Thursday that owner Robert Kraft convinces Belichick to reconsider accepting the award, even though Kraft is also a Trump enabler.  Otherwise, it will be a permanent stain on the organization.

In much more entertaining NFL news, it was a blast watching the Cleveland Browns beat the Pittsburgh Steelers 48-37 last night.  We'd almost forgotten how much fun it is to root against Steelers quarterback Ben Roethlisberger, but really, it brought an internal peace for the evening.  Big Ben threw three interceptions in the first quarter, and the Browns capitalized every time, as they ran up a 28-0 lead in the blink of an eye.  After that, there was no looking back, and Cleveland went on to get its first playoff win since 1994.  They face the Kansas City Chiefs next week, and we don't see the Browns winning that one, but we're happy to root for a major upset.

The New Orleans Saints beat the Chicago Bears 21-9 last night, but the most entertaining moment of that game was when Bears receiver Cordarrelle Patterson dropped a f-bomb during the Nickelodeon broadcast.  You can't do that on television, kids.

Last night's Boston Celtics - Miami Heat game was postponed because Miami didn't have enough eligible players, thanks to coronavirus-related issues, and the Celtics were also hanging on by a thread.  You have to wonder if the NBA will have to pause their young season soon, because playing games during this intense stretch of the pandemic, even with the protocols in place, seems to be begging for trouble.

Kyrie Irving missed his third straight game last night, and it's still unclear why he's out right now.  Irving a distraction to his team?  Who could have seen that coming?

Whoopi Goldberg says she'd still like to become the first American star of Doctor Who.   That's still a hard pass.  The Doctor can be a man or a woman, and the Time Lord doesn't need to be white, but s/he has to be British.  Doctor Who is a distinctly British institution, and the lead needs to reflect that.  An American actor or actress could star in an U.S. version of the show, but that version doesn't need to ever happen.  We saw a glimpse of it when the 8th Doctor was introduced in 1996 in  a TV movie on Fox, and that was "not great."  British (key point) actor Paul McGann has actually had a great run in the role since then via audio adventures, but those are produced by Big Finish, which is a British company.  Sorry, Whoopi, that's a no-go.

We just found out Pete Davidson's movie, The King of Staten Island, is now on HBO Max.  The guys really want to see that, so let them know if you want to join them.

The Sex and the City revival is also now officially coming to HBO Max.  Pretty sure we will skip that one, but feel free to send us your thoughts when it gets here.

Sorry to hear that John Reilly died on Saturday.  The actor had many roles over his career, but we knew him as Sean Donely on General Hospital back in the mid 1980's/1990's.  No cause of death was given.  Reilly was 84 years old.  Our condolences go out to his family and friends.

Okay kids, that's going to do it for now.  Here are the Black Crowes to close things out with a previously-unreleased tune.  We give you, "Charming Mess," for today's, "Song of the Day."

Seems like a good way to kick off a new week.

Thanks for stopping by, everyone.  It was great to see you, as always.  Let our crew know if you want to watch The King of Staten Island later this afternoon, or if there's another time that works better for you.  For now, enjoy the rest of your day, stay safe, and we'll catch up with you again soon.  Until next time, that's today's Clearing out the Clutter, and we are outta here.