Welcome back, and a happy Friday to you all.  We made it through the first week of 2021!  Seemed like it was six months long, but we made it!  What's your plan for the weekend?  Not sure what we're going to do.   The annual gap between the end of the New England Patriots and the start of the Boston Red Sox is always a little confusing, and it's longer than usual this time.  BDH and Little Buddha are happy to read their book, but they also asked if we could still watch some football playoff games, so those are probably the main items on the schedule.  In any case, let's check out the headlines.  The guys made coffee, so grab yourself a nice medium DD, because it's time to clear out some Clutter.

The rats continue to abandon the sinking ship:  Transportation Secretary Elaine Chao and Education Secretary Betsy DeVos submitted their letters of resignation yesterday, following the Donald Trump-incited mob attack on the U.S. Capitol Building.  Let's be clear, these two are leaving now so they don't have to vote on whether or not to invoke the 25th Amendment to remove Trump from office.  They are also trying to save their reputations for their post-government careers.  They, and everyone else who was part of this dumpster fire, pushed this nightmare on the country for years, and now they want to pretend they're suddenly outraged when Trump once again showed his true colors.  They're both cowards who don't deserve credit for running away less than two weeks before Inauguration Day. 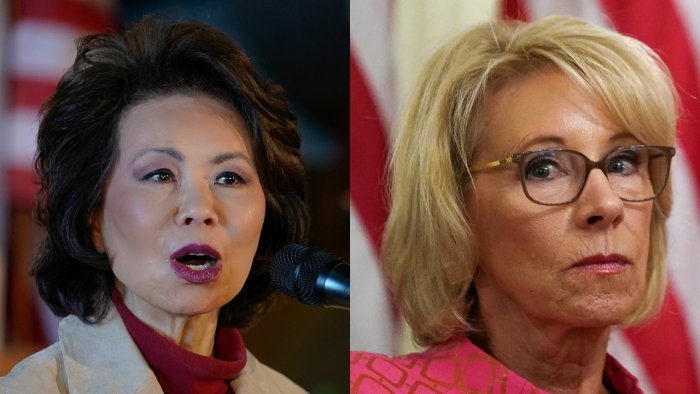 Profiles in cowardice.  (pic via deccanherald.com)

If the Cabinet members won't do their duty and invoke the 25th Amendment,  it looks like the House is planning on a second impeachment vote next week.  Let every Republican who objects explain why they condone the assault on themselves and their colleagues.  We will hang that on them for the rest of their careers.

Donald Trump posted a video last night admitting he won't be serving a second term and claiming there will be a "a smooth, orderly and seamless transition of power."  This is about as close as we'll ever get to a concession speech.   He only did it to give political cover for Republicans who don't want to force him out before the 20th, and to try to reduce his legal exposure for his own actions on Wednesday.  However, he still warrants immediate removal from office.

The man incited a violent attack on the United States government.  There have to be repercussions for that, or else there's nothing stopping another White House occupant from trying the same thing if he thinks it will help him.  Also, a man who would do that to his own country has no business being in charge of this country's nuclear weapons.  He's unhinged and a threat to national security.  We can't just keep our fingers crossed that he doesn't do anything else for 12 more days.

Everyone knows Donald Trump will try to pardon himself if he has the chance.  The coward is about self-preservation at all costs.  If he goes through with it, the pardon must be challenged in court.  No one ever intended for the White House occupant to be the judge in his own case.  Of course, no matter how that legal challenge plays out, Trump can't pardon himself for state crimes, and prosecutors will still be coming for him after January 20.

Even the conservative Wall Street Journal editorial board is calling for Donald Trump's resignation.

We're sorry to hear that a Capitol Police officer died yesterday due to injuries sustained in the riot.  Donald Trump has Brian D. Sicknick's blood on his hands.

Senator Ted Cruz is desperately trying to distance himself from Wednesday's riot, and Representative Alexandria Ocasio-Cortez isn't having it.  AOC called Cruz "unfit" for office after sending a fundraising email during the riot and denying any responsibility for the chaos by lying about election fraud.  Cruz and Josh Rawley should both resign from the Senate, and if they won't do it, the Senate should expel them.

Newspapers in Senator Josh Rawley's home state of Missouri are calling for his resignation for his role in fanning the flames that led to the riot.  Our sense is that Rawley's naked pursuit of power (and the presidency down the road) will short circuit his career.  It can't happen soon enough.

Politicians aren't the only ones trying to escape their associations with Donald Trump:  Facebook has "indefinitely" suspended Trump's account after this week's disgrace.  Mark Zuckerberg and company helped unleash Trump on the United States in the first place, but now they're suddenly outraged by the fact that he's a sociopath.

Also, now that it's been two months since the presidential election, the results have been certified, and Trump admits he's leaving on January 20, Facebook should finally end its overreaching political ad ban.

Congratulations to Boston Mayor Marty Walsh on being President-elect Joe Biden's choice for Labor Secretary.  Mayor Walsh has been a union ally for decades, and his nomination is a great boost for the workers of this country.  This move also makes Boston's next mayoral election much more interesting.  Boston City Council President Kim Janey will become interim mayor after Walsh is confirmed, which will make Janey both the first Black and female mayor in the city's history.  City Councilors Michelle Wu and Andrea Campbell have both already announced their candidacies, but many more people are likely to be considering it now, given Mayor Walsh's pending departure.  No word yet on if that list includes BDH and Little Buddha.

Elon Musk is now the world's richest person with a net worth of over $185 billion.  That number is insane enough by itself, but Musk began 2020 with a net worth of about $27 billion.  That's right, he made about $158 billion in one year while millions of people suffer in the middle of a global pandemic.  That's nothing to applaud, it's an indictment of a broken financial system.  Musk's wealth explosion mostly comes from Tesla's stock jumping more than nine-fold over the past 12 months.  The Clutter investment team doesn't think that's sustainable, but in any case, Musk now becomes the new poster boy for calls to make the wealthy pay their fair share in taxes.

Will star quarterback Deshaun Watson end up demanding a trade from the Houston Texans?   Watson is reportedly irritated at the team for hiring Nick Caserio as the new GM without talking to any of the candidates Watson suggested first.  Add that to ownership not giving him a heads-up about the trade of DeAndre Hopkins last off-season, and it sounds like Watson is feeling disrespected.  It certainly doesn't help that the team has given Watson almost no tools to work with on the field, thus wasting his immense talents with a 4-12 season.  On the other hand, Caserio could be fired on the spot if he trades Watson, so it looks like the new GM needs to find another way to put out this fire quickly.

We caught the first two episodes of Ted Danson's new sitcom Mr. Mayor last night, and they were both pretty underwhelming.  Danson is officially a sitcom god, but the material about a businessman becoming the mayor of Los Angeles felt flat.  What we didn't know, until reading the linked article, is that the original premise of the show was for Alec Baldwin's 30 Rock character Jack Donaghy to become the mayor of New York City.  It sounds like Baldwin bailed pretty late in the process, which forced a retooling of the show.  That makes sense, based on what we saw last night.  30 Rock took a while to find its footing, so we'll probably give Mr. Mayor creators Tina Fey and Robert Carlock time to do the same here, but it was a slow start out of the gate.

Okay kids, that's going to do it for now.  Here's Pink Floyd to close things out with, "Another Brick in the Wall (Part 2)" for today's, "Song of the Day."