Welcome back, and congratulations on making it to another Friday!  Did anyone else here feel like they just ran out of gas this week?  I saw some people tweeting about that a few days ago, and it was definitely the case for me.  Everything hit harder than usual for no reason on Tuesday, and the other days seemed to take more energy to get through than usual.  I don't know.  There's also the fact that January remains my least favorite month of the year.

In any case, BDH and Little Buddha say not to think about it too much.  The promise they'll help me stay focused on some basic self-care, like eating better and drinking more water, so we're firing on all cylinders when the Trump administration finally ends next week.  I love those two.  They also want you to know that the coffee is ready.  Grab yourself a nice medium DD, because it's time to clear out some Clutter.

(Don't forget to check out our new limited-edition T-shirt.  It's only available until January 26!)

President-elect Joe Biden unveiled a $1.9 trillion stimulus plan yesterday to help the United States while the coronavirus pandemic continues to run rampant across the country.  Biden's plan includes an additional $1400 stimulus check, increased unemployment benefits, increased vaccine funding, temporary tax credit extensions, assistance to people struggling with housing, boosts to the Affordable Care Act, a proposal to increase the federal minimum wage to $15/hour, and more.  There should be more than just one check, but it's a start in the right direction. The expectations are much higher now that Democrats will control both chambers of Congress in addition to the White House.

We're sure Republicans will oppose it in the name of "fiscal prudence."  Funny how that's never an issue when they give tax breaks to the top 1%.   Democrats in both chambers should ignore the objections, especially since most of these folks have shown themselves to be opponents of democracy.  Millions of people are still suffering.  It's time for the federal government to finally embrace their duty to help. 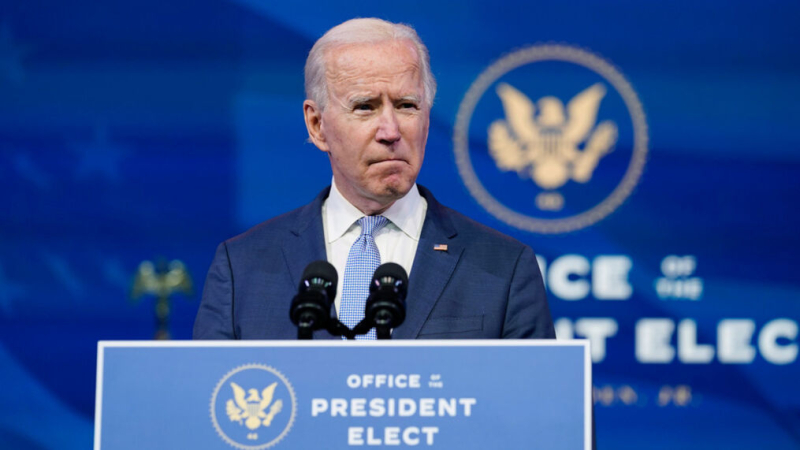 President-elect Biden is ready to go big right out of the gate to help the country.  (pic via nbcmontana.com)

The fact that we are about to have a president who supports the Affordable Care Act (ACA) again is one of the many reasons why November's election was critical for so many.  Health care remains a huge problem in the United States, and we must strengthen the ACA, instead of just trying to get rid of it with no substitute in place.

Cheers to President-elect Joe Biden for appointing more women to his cabinet than his six immediate predecessors.

It doesn't seem like many lawyers want to defend Donald Trump during his second impeachment trial.  Anyone who takes the job has to know that it will be a permanent stain on their legacy.  We have one piece of advice for Trump's post-presidency legal team:  Make sure you get paid in advance.

Donald Trump's staff is reportedly trying to organize a farewell rally for the adulation addict on Wednesday the 20th.  Gotta get that last fix before his relevancy falls off a cliff.  Just five more days until we have real leaders in the White House again, friends.

Like Donald Trump, any member of Congress who conspired with the mob who attacked the U.S. Capitol should have legal charges brought against them.  Unlike Trump, there's no need to wait until these people leave office.  If enough evidence is gathered to make a convincing case, throw the book at them, and do it right away.  Anyone who helped with this attack is a national security threat, and they should be behind bars.

New Senator Tommy Tuberville (R-Alabama) thinks President-elect Joe Biden's inauguration could have been postponed for a while.  Senator Tuberville apparently doesn't realize the the date is specified in the U.S. Constitution.  Don't be like Senator Tuberville, kids.  Pay attention in school.

The New York Jets are hiring Robert Saleh to be their next head coach.  That makes Saleh the first Muslim head coach in NFL history, so cheers to him for that.  The San Francisco 49ers defensive coordinator is reportedly getting a five-year deal, so ownership must be convinced he's the right guy to turn around the franchise.  What do you think, Jets fans?  Are you excited about the move, or do you remain suspicious of everything this team does, because the Jets are the Jets?

The Pittsburgh Steelers are rebooting their coaching staff after losing in the Wild Card round of the playoffs to the Cleveland Browns last weekend.  Four assistant coaches have already been sent packing, and a few more may soon follow them.  We just want to know if we'll be able to root against Ben Roethlisberger again next season, or if the aging quarterback thinks it's finally time to retire.  Our excitement over booing the Steelers will drop considerably if Big Ben isn't there.

The Brooklyn Nets general manager says Kevin Durant and Kyrie Irving have "committed" to working smoothly with new teammate James Harden.  Kyrie Irving won't even commit to getting on the court in the first place these days, so we don't know what Sean Marks is talking about here.

It seemed like Chris Evans was ready to hang up his Captain America suit after Avengers: Endgame, but apparently he may not be done with it just yet.  Hey MCU fans, where would you like to see Cap show up next?  Bonus points if his return makes a point of reminding everyone he'd be on the opposite side of the MAGA cult.

After a couple of false starts, we finally watched The King of Staten Island last night.  We've never been huge Judd Apatow fans, and last week was literally the first time Pete Davidson ever made us laugh, but the movie was tremendous.  Davidson does a terrific job in this semi-autobiographical story of a guy struggling to get his life together while dealing with mental illness and adjusting to his mom dating a guy who is a firefighter, just like his late father.  It didn't quite reach "must-see" level, but if you have any curiosity about the movie, you should check it out.

We're sorry to hear  Joanne Rogers died yesterday.  The widow of the universally-adored Fred Rogers was 92 years old.  She and her husband were the embodiment of the kindness this world needs much more of these days.  Our condolences go out to her family and friends.

Sammy Hagar and Michael Anthony also say that an Eddie Van Halen tribute concert will happen eventually.  Wolfgang Van Halen made similar comments last fall, but no one is talking about a specific date at this point.  Don't know if that's something we'd have any chance of getting tickets for, but we'll give it our best shot when the time comes.  If our efforts fail, we'll definitely buy the pay-per-view to pay our respects one more time to the late guitar hero.  It's still weird that he's gone.  We're used to long waits between Van Halen albums, and there's some part of us that still expects to be talking about band rumors later this year, or maybe in 2022.

Mötley Crüe is celebrating its 40th anniversary on Sunday, and we suddenly feel older than dirt.  That's going to take some time to sink in.

Okay kids, that's going to do it for now.  Here are the Foo Fighters to close things out with their latest single, "Waiting on a War" for today's, "Song of the Day."

Thanks for stopping by, everyone.  Hanging out with all of you is always a treat.  Enjoy the rest of your day, stay safe, and we'll catch up with you again soon.  Until next time, that's today's Clearing out the Clutter, and we are outta here.