Welcome back!  How are you?  I know I said we probably weren't going to the bookstore yesterday, but I changed my mind.  That turned out to be a good call, because I found something new for BDH and Little Buddha to read.  I was starting to get the sense they weren't loving their other book, so we're putting that one away for a little while.  The guys seem to be excited about this one, which is good, because it's long.  It will definitely keep them busy for the rest of 2020 and should last a good bit into the start of 2021.  Of course, they want to hang out with you right now and check out today's headlines.  The coffee is on the counter, so grab yourself a nice medium DD, because it's time to clear out some Wednesday Clutter.

Senate Majority Leader Mitch McConnell is trying to kill the $2000 pandemic relief payments by first blocking them as a standalone issue, and then tying them to a bill which also removes legal protections for social media companies and also establishes a commission to investigate (imaginary) voter fraud.  Has anyone ever asked McConnell directly why he hates the American people so much?  We're hard-pressed to think of another public official in recent memory who has such a contempt for the entire country.  Well, except for Donald Trump, but he's a sociopath who may well be a foreign agent.  What's McConnell's excuse?  Of course, the short answer is that he reflects the contempt of his party, the ones who have no problem giving tax cuts to corporations for no reason but don't think helping struggling people is "sound economic policy."

The U.S. once again set new single-day records for coronavirus-related deaths and hospitalizations yesterday.  The vaccines are key, but it will be months before they have their full impact, and people still need to do everything they can to stay safe right now.  We're all tired of the status quo, but we have to push forward until we come out on the other side of this pandemic.  Wear your masks, wash your hands, and continue social distancing.  It's not fun, but it's what still has to happen.

President-elect Joe Biden slammed the Trump administration yesterday for the botched pace of the coronavirus vaccine distribution.  Biden and others have pointed out it would take years for the entire country to be vaccinated at the current rate.  The administration's response is to claim that they're not that far behind, and really the whole thing is the responsibility of the states.  The American people have been failed by the federal government from start to finish during this pandemic. 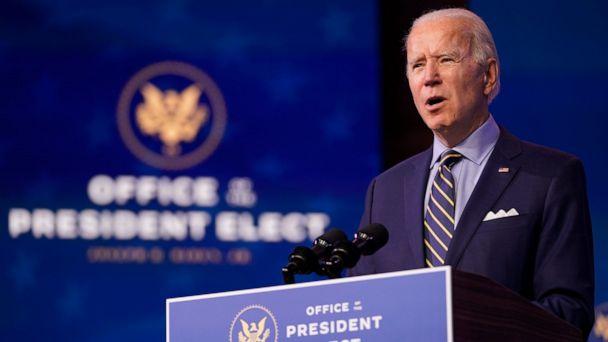 We have 21 days of the Trump nightmare left before the return of real leadership.   (pic via abcnews.go.com)

We're sorry to hear that Louisiana congressman-elect Luke Letlow died yesterday from the coronavirus.  He was only 41 years old, which is far too young.  At the same time, "Over the past few months, Letlow has posted numerous photos of himself and dozens of others at campaign and community events without masks and without social distancing. He had also pushed for states to "reopen the economy" amid the pandemic."  We just don't understand what it will take for Republicans to grasp the concept that a virus doesn't care about your political ideology.  This isn't a test of courage - it's a matter of science.

Manhattan District Attorney Cyrus Vance Jr.'s office has reportedly hired forensic accounting specialists to assist in the ongoing investigation into Donald Trump's business affairs.  We'll see where this all leads, but you can tell by Trump's ongoing battle to hide is tax returns, and his frantic battle to stay in office, that he knows he's looking at serious legal problems, and his protections run out on Inauguration Day.

Look at that, the federal government's new dietary guidelines don't include the recommendation to cut sugar and alcohol consumption, and they also don't mention the role of climate change on food production.  How much money do you think the sugar/alcohol/fossil fuel industries have given Donald Trump over the last four years?

Over 2.3 million people have already voted in Georgia's Senate runoff elections.   That's a new turnout record for special elections in the state.  Everyone understands that control of the U.S. Senate is at stake here.  This will probably be the same dynamic as the general election though - are Democrats more likely to vote early, with Republicans mostly voting on January 5?

The Massachusetts Legislature successfully overrode Governor Charlie Baker's veto of a law expanding abortion access in the commonwealth.  The bill, "codifies abortion rights into state law, allows abortions after 24 weeks of pregnancy in cases where the child will not survive after birth, and lowers from 18 to 16 the age at which women can seek an abortion without consent from a parent or guardian."  It's an important protection against the conservative U.S. Supreme Court's ongoing campaign to outlaw abortions in the United States, and it also strengthens the ability of women to make their own health care decision in consultation with their doctors.  The bill existed in one form another for years, and this passage is long-overdue.

The Louisville Police Department is moving to fire two of the police officers who were involved in the murder of Breonna Taylor in June.  These men deserve to be in prison.  While we're pleased to see they are at least facing this punishment, we dread the idea of stories of them both being hired elsewhere down the road.  It's like the Catholic Church moving abusive priests around the country.

ESPN football analyst Booger McFarland used the specific example of Dwayne Haskins getting cut by the Washington Football Team to make a larger argument about African American players often flaming out in the NFL, because they're allegedly more focused on social media than becoming better football players.  What a bad take.  First, complaining about social media just identifies you as out of touch with the world around you.  It happens with every generation who waxes nostalgically about "the good old days."  Second, white players fail all the time in the NFL.  Either they didn't do the work, or they simply weren't good enough.  McFarland's rant feels like the days when Bill Cosby used to scold black men for wearing low-riding pants.  It's the inability to understand how a younger generation expresses themselves.

We'll be watching tonight's AEW Dynamite wrestling show, which is a tribute card in honor of the late Brodie Lee, who shockingly died earlier this week at age 41.  Friends, if you make as much of positive impact on those around you as Lee (real name Jon Huber) did, you lived a good life.  Twitter has been filled for days with tribute after tribute from wrestlers in all different organizations talking about how much joy and happiness he brought to their lives.  It's been a touching memorial.

Cheers to Chrissy Teigen, who just announced she's been sober for four weeks.  We continue to admire Teigen's willingness to share her personal struggles with the public, whether it's something like this, or her miscarriage earlier this year.  Talking about things like that out in the open always helps reduce any associated stigma and can remind others in similar situations that they're not alone.

In case you missed it (lucky you), Alec Baldwin's wife Hilaria has apparently been pretending to be a Spanish woman for years, even though neither of her parents are Spanish, and she was born and grew up in Massachusetts.  This isn't exactly the most pressing issue of the day, but it does appear to be cultural appropriation, and thus we don't have any issue with the backlash she's currently receiving.  We just want to know who is going to play who in the TV movie, because you know that's coming.

Okay kids, that's going to it for now.  Our countdown to 2021 continues with Rihanna and, "Don't Stop the Music" for today's, "Song of the Day."

Thanks for stopping by, everyone.  It's always great to see you.  The guys say you're welcome to come back later to either read or watch Dynamite with them.  Either way, don't worry, we have plenty of snacks.  Otherwise, enjoy the rest of your day, stay safe, and we'll meet you back here tomorrow for our final gathering of 2020.  Until then, that's today's Clearing out the Clutter, and we are outta here.