Welcome back!  How are you?  I did this week's grocery shopping yesterday, so that's the last big crowd for me in 2020.  Looking forward to not giving that a second thought at some point next year.  Not sure if we're going to take a trip to the bookstore today or not.  BDH and Little Buddha are set for a while with their reading, so we might hold off on that for a bit.

Also, of course we're disappointed that the New England Patriots didn't make the playoffs this year, but I gotta be honest - we are not going to miss nighttime football games for a while.  Some of us need our beauty sleep!  (Not BDH and Little Buddha - they always look great.)  Gonna need plenty of coffee today, and the guys are on the case.  There's a fresh pot on the counter, so grab yourself a nice medium DD, because it's time to clear out some Tuesday Clutter.

The House overwhelmingly voted to override Donald Trump's veto of the National Defense Authorization Act yesterday.  The bipartisan tally was 322-87, which is more than enough to move past Trump's objections.  The measure now moves to the Senate, where Senators Bernie Sanders and Ed Markey say they will hold it up unless Mitch McConnell allows a vote on the $2000 direct payments approved by the House for people who are suffering because of the coronavirus pandemic.  We know Mitch doesn't want to approve the payments, but can he afford to have such a bright spotlight on his obstructionism with the Georgia runoff elections finishing a week from today? 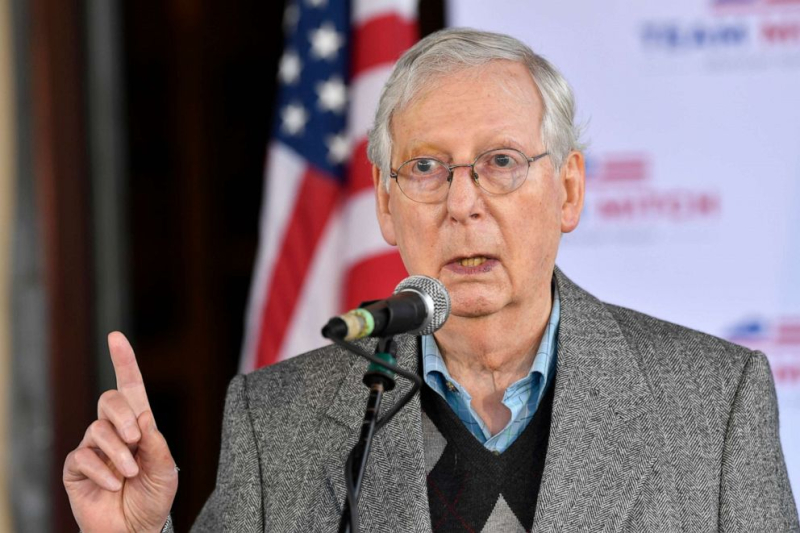 Just how important is it to Mitch McConnell to hurt struggling Americans?  (pic via abcnews.go.com)

The Christmas suicide bombing in Nashville was four days ago, and Donald Trump still hasn't reached out to the city's mayor.  What a disgrace.  By the way, the guy blew himself up in a public location in a way designed to cause terror.  He's a domestic terrorist. This isn't difficult.

Donald Trump is reportedly looking for a new Florida home because Mar-a-Lago "isn't big enough."  In reality, it's because his current neighbors don't want him there anymore, and they've got a legal argument to keep him from using his club as a permanent residence.

President-elect Joe Biden has largely ignored Donald Trump since the election and gone about his business of preparing his return to the White House in January.  However, Biden called out the current leadership at the Defense Department and the Office of Management and Budget yesterday for obstructing the transition and thus leaving the United States vulnerable.  Donald Trump never cared about U.S. security, or the nation's needs in general, over the last four years, and that's not going to change in the next three weeks.  Trump has always been about Trump, and no one else matters.  We return to an actual leader 22 days from today, and not a moment too soon.

President-elect Biden is expected to invoke the Defense Production Act to assist with coronavirus vaccine production efforts in the United States.  That Donald Trump didn't do this right out of the gate was one of his biggest failures during this pandemic.  Imagine where we would be right now if the country had a competent leader this year.

Here are some details about the new Massachusetts grant program for businesses hurt by the coronavirus pandemic.  The $668 million program is apparently expected to help 9,000 small businesses in the commonwealth.

Good to see that former Jeffrey Epstein accomplice Ghislaine Maxwell has once again been denied bail ahead of her trial on sex-trafficking charges next year.  Maxwell would hop on a flight to a country with no extradition treaty with the U.S. the second she walked out of the courthouse.  (She could share the plane with Donald Trump.)  We still have doubts about her safety in prison, where she seems likely to eventually meet Epstein's fate, but at least this way the public has a better chance of holding her and her associates responsible for their abhorrent actions.

The New England Patriots were crushed 38-9 by the Buffalo Bills last night to fall to 6-9 on the season.  Apart from punter Jake Bailey remaining the most consistent player on the team, nothing went well for New England last night.  Cam Newton was 5 of 10 for 34 yards with no TD's or interceptions, before being replaced by Jarrett Stidham in the third quarter.  The backup then promptly went 4 for 11 for 44 yards also without a touchdown or interception.

We could go either way on Newton returning next year.  If Bill Belichick thinks Newton will be healthy and wants the quarterback for one more season while the coach/GM rebuilds the entire team, so be it.  If not, that's also fine.  However, it's clear the Patriots have no use for Stidham, who should be looking at other career options.  Meanwhile, Buffalo Bills quarterback Josh Allen carved up the New England defense all night, going 27-for 36 for 320 yards, with four touchdowns and no interceptions.

We knew the Patriots probably wouldn't make it to the playoffs this year, but we held out hope that they might somehow piece together a .500 record, even if it was in an ugly fashion.  However, that was not to be.  Even 7-9 wouldn't sound "that" bad, given all of this team's problems, but who knows if this squad can beat the New York Jets next week.

The Washington Football Team cut quarterback Dwayne Haskins yesterday after he recently broke the league's coronavirus protocol.  It was Haskins' second violation, and that, paired with a generally unsuccessful stint on the field, was enough for head coach Ron Rivera to pull the plug on the 2019 first-round pick.

Look at NL West, here come the San Diego Padres.  First San Diego is finalizing a trade for pitcher Blake Snell, and now they're apparently about to acquire Yu Darvish from the Chicago Cubs in exchange for prospects.  Looks like the Padres are gearing up to challenge the Los Angeles Dodgers for division supremacy.  Good for them, and that competition is good for baseball in general.  It must be nice to have such a deep farm system that allows you to acquire two star pitchers like Snell and Darvish.

We're trying hard not to obsess about the fact that the Doctor Who holiday special is still a few days away, but a new adventure is the perfect start to 2021, as far as we're concerned.  We loved the season finale and can't wait to see where the show goes from there.  The only downside is that, while the next season premiere date hasn't been announced, this is probably it for new Doctor Who for at least another nine months.

Okay kids, that's going to do it for now.  We continue our countdown to 2021 with Journey and "Don't Stop Believin'" for today's, "Song of the Day."

Thanks for stopping by, everyone.  It's always a treat to see you.  Enjoy the rest of your day, stay safe, and we'll catch up with you again soon.  Until next time, that's today's Clearing out the Clutter, and we are outta here.