Welcome back, and a happy New Year's Eve to you all!  Just a few more hours to go until we can finally say we are done with 2020. It's not that we expect the world to change overnight, but we are hopeful that 2021 will be better by comparison to this nightmare.  Hopefully that's not too much to ask, right?

What are your plans for the evening?  It won't be anything too crazy here.   We're currently debating whether to stay up until midnight to see 2021 arrive, or perhaps go to bed closer to the usual time to end this year that much sooner.  If we do stay up, we'll probably just watch the Doctor Who marathon on BBC America for a while.  Don't tell BDH and Little Buddha, but I might go get them some end-of-year cookies for a treat.  Oh, here come the guys.  They say the coffee is ready, so grab yourself a nice medium DD, and let's clear out some Thursday Clutter.

(Programming note:  We usually take January 1 off, but I'm pretty sure we'll be here at some point on Friday.  We'll let you know on our Facebook page if that changes.)

The United States set another coronavirus death record with more than 3,740 fatalities yesterday, and the CDC is warning that 80,000 people could die in the next three weeks as we enter what appears to be the darkest stretch of the pandemic.  Please continue doing everything you can to stay safe, friends.  It feels like Groundhog Day, but we want you all back here in 2021, so wear your masks, wash your hands, and practice social distancing.

Donald Trump is expected to return to Washington today, which will come as a surprise to the people who paid to see him at Mar-a-Lago tonight.  It's not clear why he's coming back early, but the odds it will be for any productive reason are between slim and none.  Inauguration Day is just 20 days away, folks.  We can do this.

Speaking of January 20, President-elect Joe Biden plans to immediately freeze any Trump regulations which have not already gone into effect by Inauguration Day.  The sooner the Biden administration rolls back every last trace of Trump's destruction they can, the better off this country will be.

Senator Josh Hawley (R-Missouri) plans to object to the certification of the Electoral College results on January 6, despite there being no evidence of fraud.  By joining the House members who plan to do the same, Hawley's actions mean every member of Congress will have to vote on the matter.  Hawley's decision to join the objections is blatantly anti-democracy, as he panders to 2024 Republican presidential primary voters, but let's see who else in his caucus joins him.  Senate Republicans either ignore Hawley, admit that Joe Biden won a fair election, and take heat from their voters, or they join him, and we all see who are the enemies of our country. Joe Biden will still become president on January 20, but the damage that Donald Trump and his cult followers have done to our democracy may never been fully repaired.

(Also, we'll bet right now that Hawley comes in 4th at best in the 2024 Iowa caucuses.) 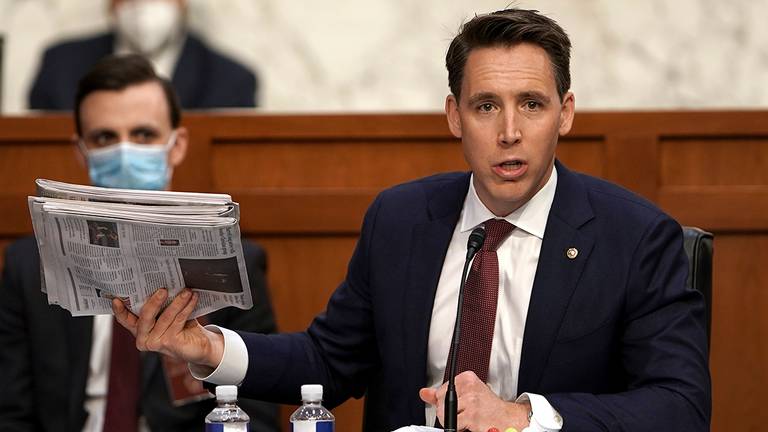 Senator Hawley wants to make sure everyone knows he opposes democracy.  (pic via kansascity.com)

The federal government says the token stimulus relief payments are already being delivered.  We can't stop thinking about the contempt that Republicans have for ordinary people.  Millions have been suffering for months, the best the GOP would do is $600, and even that only came after Mitch McConnell finished rushing through confirmations for as many conservative federal judges, including Justice Amy Barrett Coney, as he could find.  Mitch and company will give trillions in tax cuts to corporations and the wealthy, but they loathe helping anyone else.  If you're not part of the top 1%, you have no value to them.

Senate Majority Leader Mitch McConnell says a $2000 payment vote "has no realistic path."  We beg to differ.  If Democrats win both of the Georgia Senate runoff elections next week and send Mitch back to the minority party, that would seem to open a big ol' path right up for more substantial assistance for those who so desperately need it.

Boston Police Sergeant Clifton McHale, who is allegedly the police officer caught on video bragging about hitting George Floyd protestors with his car, was also accused of sexually assaulting a drunk woman while he was still in uniform.  His punishment?  A one-year unpaid suspension, and he was promoted to sergeant after that, instead of being placed in jail.  If it's confirmed that McHale is indeed the one in the video, Suffolk County District Attorney Rachael Rollins can't let McHale get off with a slap on the wrist again.

The Boston sports scene is losing yet another longtime star with the news that Zdeno Chara is leaving the Boston Bruins and signing with the Washington Capitals.  The longtime B's captain said in an Instagram post that the team told him that they were moving on in a younger direction, and the 43-year-old Chara said there are no hard feelings.  The guy is one of the all-time great defensemen, and he's been a (literally) towering presence in Boston for 14 years.  We wish him the very best of luck next season and say thank you for everything he did for the team and the city.

Man, Chara, Mookie Betts, Tom Brady, and Rob Gronkowski are all gone.  Which departure bothers you the most, fans?  For us, it's Mookie by a mile, but Boston sports is clearly starting a new chapter.

New York Governor Andrew Cuomo says the Buffalo Bills will be allowed to have some fans in the stands for their first playoff game in 25 years.  The crowd will be capped at 6,700 people (out of a total capacity of 72,000) and everyone must wear masks, socially distance, and test negative before they are allowed inside the stadium.  There will also be mandatory contact tracing afterwards.  Governor Cuomo says this is part of a pilot program to see how testing and rapid testing can help open up parts of the economy moving forward.  This feels more than a little like pandering to us, but we hope everyone enjoys the game safely.

As we mentioned yesterday, last night's AEW Dynamite show was a tribute card to pro wrestler Brodie Lee who died earlier this week.  It was clearly an emotional night for his most recent colleagues, because Lee seemed to be loved by everyone who ever met him.  The ending of the show was amazing, and we hope that it at least gave his family some sense of comfort:

We're sorry to hear Dawn Wells died yesterday because of coronavirus-related complications.  The actress, who was best known for playing Mary Ann on Gilligan's Island, was 82 years old.  Our condolences go out to her family, friends, and fans.

Former Jeopardy! champion Ken Jennings apologized on Twitter yesterday for offensive things he's tweeted in the past.  Jennings is one of the guest Jeopardy! hosts while the search continues for Alex Trebek's successor, and it sounds like he's trying to make sure he's in the mix for the permanent role.

Okay kids, that's going to do it for now.  We break out this tune once a year, because it's the perfect way to wrap things up on New Year's Eve.  Here's Europe with, "The Final Countdown" for today's, "Song of the Day."

That's a wrap!  On behalf of our entire crew, thank you all so much for hanging out with us, both today, and this year in general.  2020 has been a real battle for everyone, but getting to hang out with you for a little while each day made the craziness much more manageable for us.  We wish you all a happy and healthy evening, and we're excited to sort through the headlines over a nice cup of coffee with you again next year.

Oh, hold on.  BDH and Little Buddha want to make sure you know you're welcome to come back to watch Doctor Who with them tonight.  The guys will definitely stay up until midnight if you are around.  Otherwise, be good, stay safe, and we'll see you again in 2021.  Until then, that's today's Clearing out the Clutter, and we are outta here.