Welcome back!  How are you?  We're heading into the final stretch of 2020, and not a moment too soon.  This will probably be a quiet week for our crew.  Apart from grocery shopping, we'll be avoiding crowds and mostly combining reading with watching some end-of-year TV programs.  (We see you, Doctor Who on BBC America marathon!)  BDH and Little Buddha just reminded me that the New England Patriots game is tonight, so we'll also need a nap later this afternoon so we can stay up for the whole thing.  Yeah, nothing crazy, and that's just the way we like it.  Now, let's check out the headlines.  The guys made coffee, so grab yourself a nice medium DD, because it's time to clear out some Monday Clutter.

After complaining about it for almost a week, Donald Trump finally signed the coronavirus relief bill last night, thus avoiding a government shutdown as well as a potential economic meltdown.  The bill still includes $600 direct payment checks, and all of the spending that Trump complained about (after originally requesting most of it), so his attempt to make himself look relevant just re-emphasized how clueless he is at his job even after four years.  Also, because he took so long to sign the bill, people in the Pandemic Unemployment Assistance and the Pandemic Emergency Unemployment Compensation programs will probably not get paid this week, and there will be a break in payments in 2021 because states will need to reprogram their computers.  The eventual checks will be retroactive, but all of this could have been avoided with a minimum of competence.  Instead, we're stuck with a petulant child for another 23 days. 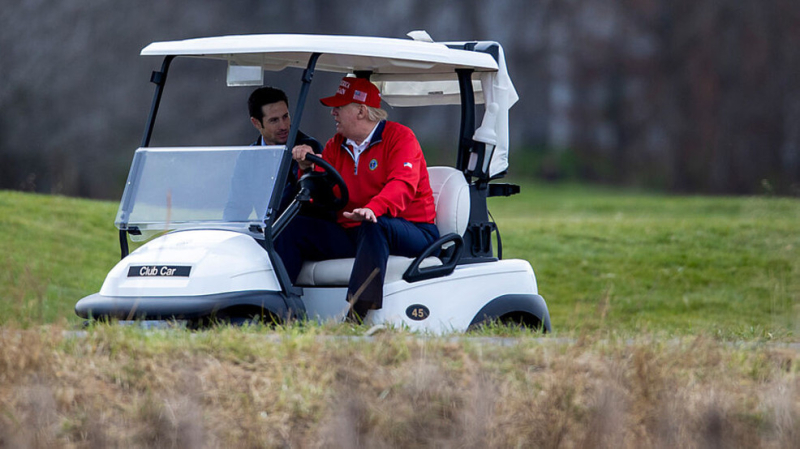 Donald Trump finally did his job once he finished golfing.  #priorities  (pic via mynbc15.com)

It looks like this will be a good day on Wall Street, now that the country's economy won't be completely destroyed because Trump signed the relief bill.  Watch him take credit today for this avoidance of a potential crisis that was his fault in the first place.

The House still plans to vote on $2,000 direct payments today, and Donald Trump seems to be under the impression that the Senate will start the same debate.  Odds are that this is just another way for him to turn the screws on Mitch McConnell for recognizing that Joe Biden won the election.  However, Trump's statement makes it crystal clear that this isn't a "both parties" problem:  Republicans are the ones holding up additional aid to millions of struggling Americans.  These guys spent four years covering for Trump, and he'll still end up burning them in the end.  Will that make the difference in next week's Senate runoff elections in Georgia?

Even The New York Post says it's time for Donald Trump to give up his attempted coup, saying in no uncertain terms, "Sidney Powell is a crazy person. Michael Flynn suggesting martial law is tantamount to treason. It is shameful."  Unfortunately, the editorial largely relies on Trump caring about what happens in the Georgia runoffs, and we all know Trump doesn't care about anyone besides himself, so it's doubtful this will have much impact on him.

We hate to say it, but Dr. Anthony Fauci and President-elect Joe Biden warn that the worst days of the coronavirus pandemic may still be ahead of us, as we wait for the fallout from this year's holiday travel.  Continue to wear your masks and practice social distancing, friends.  The vaccinations have begun, and that's fantastic, but we still likely have months left of the current status quo.  Let's all do what we can to have a happy and healthy 2021.

As we mentioned earlier, the New England Patriots face the Buffalo Bills tonight.  The only thing harder than staying up for a Monday night game is staying up for a game where the Patriots are playing to end the year with a .500 record.  (Talk about your first-world problems.)  What can we say?  The Bill are better than the Patriots, and we don't see how New England wins this game, unless they somehow end up getting all of the breaks, like they did against the Arizona Cardinals earlier in the season.  They lose at home tonight, they face the New York Jets next week to hopefully end up at 7-9, and then we finally call it a year.

The New York Jets beat the Cleveland Browns 23-16 yesterday for their second win of the season.  We know that the Browns were missing their four best wide receivers, so maybe that explains the loss.  However, do we have to worry about whether or not the Patriots can beat the Jets next week?

Guess we missed this yesterday:   Tom Brady and the Tampa Bay Buccaneers are heading to the playoffs after blowing out the Detroit Lions 47-7 on Saturday.  This is the first time the Bucs have made it to the playoffs since 2007.  Are we supposed to root for Brady, now that the Patriots are heading home at the end of the season?  We'll get back to you on that one.

The Tampa Bay Rays are trading 2018 AL Cy Young Award winner Blake Snell to the San Diego Padres for two pitching prospects and two catchers.  We don't know anything about Luis Patiño or Cole Wilcox, but we assume that they have great potential to thrive as major league pitchers, because the Rays almost never seem to miss on this sort of thing.  Every Boston Red Sox fan has to be jealous of that, but maybe Chaim Bloom will eventually bring the same magic touch here.

Sorry to hear that Hall of Fame pitcher Phil Niekro died in his sleep at age 81 on Saturday night.  Niekro was the first knuckleball pitcher we ever saw, and it was fascinating when we were little to watch this guy (who looked a little like Grandpa Clutter) make big league batters look silly with something that immitated a whiffle ball pitch.  Niekro took that pitch to 314 career wins, which is amazing when you consider he only had six when he turned 28 years old.  He's the seventh Baseball Hall of Fame player to die this year, which is unfortunately a record.  Our condolences go out to his family and friends.

The Brooklyn Nets will likely dominate for as long as Kevin Durant and Kyrie Irving stay healthy and get along.  However, they're not invincible, as the Nets lost 106-104 to the Charlotte Hornets last night.  Irving's former Celtics teammate Gordon Hayward had himself a nice night with 28 points and seven assists for the Hornets.

It's official:  The third Wonder Woman movie is a go.  We didn't enjoy Wonder Woman 1984, but we'll still be there for Gal Godot's next adventure as the Amazon warrior.  Hopefully it will be safe to watch that one in a movie theater.

Thanks for stopping by, everyone.  It was great to see you, as always.  The guys say you're welcome to come back tonight if you want to watch the Patriots game with them.  (They'll have an easier time staying awake if you're here.)  Otherwise, enjoy the rest of your day, stay safe, and we'll catch up with you again soon.  Until next time, that's today's Clearing out the Clutter, and we are outta here.