Welcome back!  Before I forget, we will be out of the office tomorrow, but we expect to be back in action on Friday.  Now, how are you?  I struck out again at the bookstore yesterday, which was disappointing, but BDH and Little Buddha were good sports about it as usual.  At least they have a new Supernatural episode to look forward to tonight.  I did finish wrapping the windows that need it, so we're (somewhat) prepared for the colder weather.  Let's check out the headlines.  The guys made coffee, so grab yourself a nice medium DD, because it's time for some Wednesday Clutter.

Coronavirus cases are spiking across the country, and Donald Trump is claiming he ended the pandemic.  That's delusional and yet another reason why we need to make sure we have a reality-centered White House occupant in 2021.  Make your plans to vote, friends, and don't leave it to the post office at this point.  Vote early, or vote in person on Tuesday, but get your ballot in as quickly as possible.  Don't let these clowns steal the election.  Lives are at stake here.

The New York Times is reporting that Donald Trump has apparently had over $270 million in debts forgiven since 2010, but he doesn't seem to have paid any taxes on his huge losses.  To review, we've got a delusional tax-cheating failed businessman in office in the middle of a pandemic.  Anyone who fell for this con man needs to take a step back and see where they went wrong in their lives.

Supreme Court Justice Brett Kavanaugh made it clear that he thinks the U.S. Supreme Court should be able to interfere in any election case it likes. That's a warning of what's to come with this court unless changes are made.  However, what happens when Kavanaugh fundamentally gets the facts wrong while making his argument?  He was wrong about how Vermont handles its mail-in ballots, so what keeps that mistake/lie in check moving forward?  Also, who knew that the dishonest frat boy who committed sexual assault and was part of George W. Bush's 2000 legal team might turn out to be a complete political hack?

Ginni Thomas, wife of Supreme Court Justice Clarence Thomas, is reportedly using her Facebook page to spread claims of corruption against Joe Biden.  The corruption of the current court has no bottom.  This is one of the reasons we object to Facebook's current two-week ban on political ads.  It does nothing to stop conservatives from continuing to lie in the final days before the election.  BDH and Little Buddha don't think that's right.

A federal judge rejected the U.S. Justice Department's attempt to represent Donald Trump in the defamation case brought against him by E. Jean Carroll, the woman who accused Trump of sexually assaulting her in the 1990's.  We'll have to see if Trump tries to rush this case to the Supreme Court while he's still in office.  Otherwise, add it to the long list of legal liabilities he's facing as soon as he is removed from the White House.

Mark Zuckerberg and Jack Dorsey will testify before the Senate today, and the heads of Facebook and Twitter are expected to claim that proposed changes to 1996 Communications Decency Act, "could collapse how we communicate on the Internet, leaving only a small number of giant and well-funded technology companies." We're torn on this, because we have no problem with Facebook in particular being broken up, but we're not sure who we trust in Washington to handle it correctly.  The fact that Attorney General Bill Barr wants to hold social media companies responsible for material that "promotes terrorism" is a red flag, because we're sure we and Barr have different definitions of "terrorism."

Now that Amy Barrett Coney is on the U.S. Supreme Court, Massachusetts abortion rights advocates are pushing for a bill that would strengthen legal protections for the procedure in the commonwealth.

A Michigan state judge overturned a ban on openly carrying guns at polling places on Election Day.  Officials say they will appeal the case, but we're telling you right now, someone will get killed on Tuesday if this decision is allowed to stand.  It's pure voter suppression, but there's nothing conservatives won't sacrifice at the alter of their almighty/completely-misinterpreted 2nd Amendment.

Philadelphia police shot and killed a 27-year-old Black man named Walter Wallace Jr. on Monday afternoon in yet another senseless loss of life.  Wallace was reportedly in the medal of a mental health situation, and his mother was trying to defuse the situation.  However, police remain completely unqualified to handle that type of situation, and now another man is dead because of it.  No police "reform" is going to correct this kind of problem in either Philly or anywhere else in the country.  A mental health professional should have been on the scene instead.  Whether you like the "defund the police" label or not, the fact remains that we must completely overhaul the role the police have in our society.

The U.S. Preventive Services Task Force recommends that colorectal cancer screenings should begin at age 45, not 50, as is now the case.  The panel says they are concerned by data showing a rise in cases among people in the 45-49 age category.

Congratulations to the Los Angeles Dodgers who beat the Tampa Bay Rays 3-1 last night to win the 2020 World Series.  Who hit a home run in the eighth inning to seal the win?  Mookie Betts, of course.  Our bitterness over that trade will never go away.  It's the first title for the Dodgers since 1988, and the second title for Los Angeles this year, along with the Lakers winning the NBA championship.

Wide receiver Dez Bryant came out of retirement to sign a deal to be on the Baltimore Ravens practice squad.  Bryant has been out of action for two years, so it should be fascinating to see how much the 31-year-old still  has in the tank.  If he can go, he and quarterback Lamar Jackson should be a dangerous combination.

Chrissy Teigen returned to Twitter yesterday where she tweeted out a long essay about her recent pregnancy loss.  It's a beautiful, powerful, and courageous piece of writing, and all we can do is applaud her for having the courage to share it with the world.  May her brutal honesty help others who have been in the same tragic situation, as well as help reduce any stigma associated with this kind of devastation. 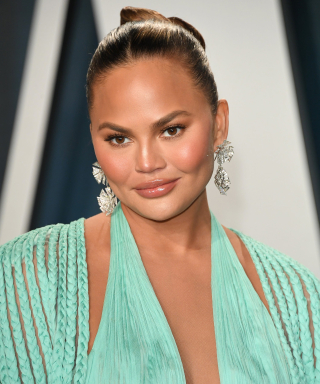 A true treasure.  (pic via refinery29.com)

Jon Stewart is returning to television.  The former Daily Show host has a multi-year deal with Apple TV+ to host a new current affairs show.  Each episode will reportedly be one hour long and focus on a single topic.  Does anyone here have Apple TV+, and if so, do you like it?  We're thinking we may have to give it a look soon.  Is it worth the time/money?

Hey, This is Us fans, how did we feel about last night's season premiere?

Okay kids, that's going to do it for now.  Continuing our loose Halloween theme from yesterday, here's Eminem and Rihanna to close things out with, "The Monster," for today's, "Song of the Day."

Thanks for stopping by, everyone.  It was great to see you, as always.  BDH and Little Buddha say you're welcome to come back later if you want to watch Supernatural with them tonight.  (Wait, today's only Wednesday.  Never mind.)  Otherwise, enjoy the rest of your day, wear your mask, and we'll catch up with you again soon.  Until next time, that's today's Clearing out the Clutter, and we are outta here.