Welcome back!  How are you?  I'm just waiting for BDH and Little Buddha to come in with the weather forecast...here they are.  Cloudy with highs almost reaching 70?  We can work with that.  I struck out again at the bookstore yesterday.  There just haven't been any new releases that I think the guys would enjoy.  They suggested maybe we should start checking out podcasts until the next book comes along.  That's a thought. Any recommendations?  Well, we'll figure that out later.  Let's see what's going on in the world.  There's a fresh pot of coffee on the counter, so grab yourself a nice medium DD, because it's time to clear out some Wednesday Clutter.

It is obscene that the U.S. government hasn't been able to find the parents of 545 children who were separated from them by this administration's racist and cruel immigration policies between 2017 and 2018.  There was no national benefit to any of this.  It was cruelty for cruelty's sake, and it's one of many reasons why voters can't let Republicans run away from their support of Donald Trump.  They aided and abetted all of this.  The politicians should be thrown out of office, and former aides like ex-White House Chief of Staff General John Kelly should wear it like an albatross around their necks for the rest of their days. 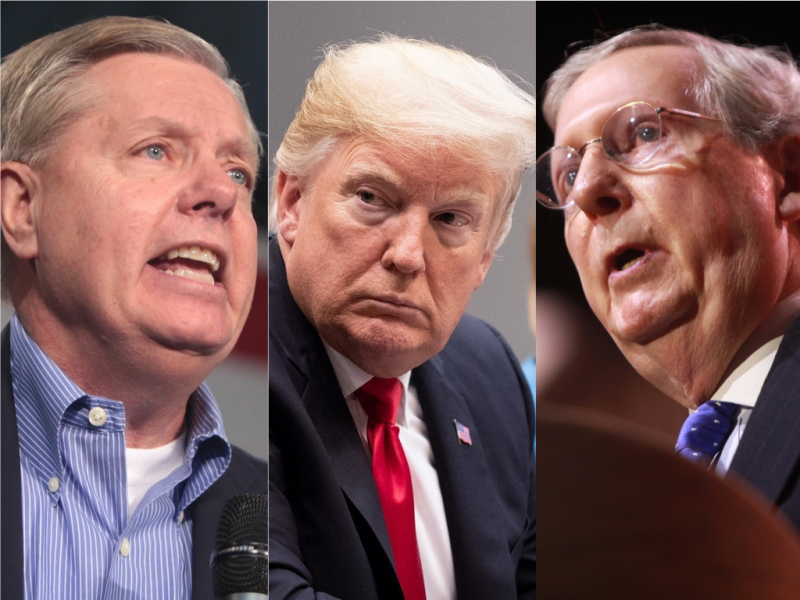 Fire all of them.  (pic via rawstory.com)

A federal appeals court blocked an attempt to overturn North Carolina's plan to accept mail-in ballots up to nine days after November 3.   North Carolina usually has a three-day extension for the ballots, but state officials implemented the extension in response to concerns about voting in person in light of the pandemic, as well as the problems with the U.S. Postal Service that have been caused by the Trump administration.  It's another loss for Donald Trump and Republicans as they seek to suppress the vote wherever possible.  It's unclear if the decision will be appealed to the U.S. Supreme Court.  The court just upheld Pennsylvania's three-day extension, but Chief Justice John Roberts can't be thrilled with the idea of having to take a flood of these cases as the GOP tries to change the rules at the last minute while millions have already voted.

Donald Trump apparently stormed out of an interview with 60 Minutes co-anchor Leslie Stahl and then taunted Stahl on Twitter about it.  That's not the behavior of a politician who thinks he has any chance of being re-elected.  That's a rat who sees the walls closing in and is lashing out in every direction.  Who knows if his coronavirus treatment meds are still a factor, but the man is unraveling before our eyes.

The New York Times discovered that Donald Trump has a bank account in China, and he's paid more in taxes to the Chinese government than he has to the United States in the last three years.  We were under the impression from Team MAGA that anyone who does business with China is a national security threat, so clearly we can't have this guy in the White House anymore, right?

The Trump campaign was down to $63 million at the start of October, which would be stunning if Trump's entire life wasn't documented proof that he's terrible with money.

A new study says Joe Biden's Social Security/SSI plan would lift 1.4 million people out of poverty.  That seems better than sending millions into poverty because of an incompetent handling of a national pandemic.

Senate Majority Leader Mitch McConnell wants to rush Judge Amy Barrett Coney onto the U.S. Supreme Court at breakneck speed, but McConnell doesn't want a coronavirus relief bill to come up before November 3, as millions of Americans continue to struggle.  That tells you everything you need to know about the GOP.  Throw them all out.

A grand juror in the Breonna Taylor murder case says Kentucky Attorney General Daniel Cameron never presented the option of homicide charges against the three police officers responsible for Taylor's death.  Cameron claimed that the grand jury decided not to pursue those charges, but we now know he was whitewashing the proceedings for the public.  He failed to do his job, and as a result, Taylor's family has been denied the opportunity for true justice against those who took her from them.  This system is rigged from start to finish.

The Boston Police Patrolman's Association apparently has nothing better to do than harass a private citizen on Twitter, so explain to us again why we can't talk about more effective uses for BPD's funding.

The Los Angeles Dodgers beat the Tampa Bay Rays 8-3 in Game 1 of the World Series last night.  This is going to end with Mookie Betts being the World Series MVP, isn't it.  We will never forgive the Boston Red Sox for letting this generational talent walk out the door.

Fox football analyst/NFL Hall of Famer Troy Aikman wants everyone to know he's a patriot, after he can broadcast partner Joe Buck were caught mocking a jet flyover before last Sunday's Tampa Bay Buccaneers - Green Bay Packers game.  Here's the thing - they weren't wrong.   Those fly-overs are a waste of taxpayer money.  They're also proof that the fans who complain about not wanting to see politics and sports mix are hypocrites if the fly-overs don't also bother them.

Hey Fast & Furious fans, how are you feeling about the news that the franchise will end after two more films?  F9 is currently scheduled to come out next Memorial Day, so you figure this all wraps up somewhere around 2025?  The whole franchise has pulled in a reported $5.7 billion and counting.  That's amazing.

We're excited to learn that Wendell Pierce will be playing B.B. King in a biopic about the legendary blues guitarist.  This project originally began in 2011, but it was tied up in a legal dispute that has since been resolved.  We're confident that Pierce will do a terrific job of showing King's creative genius.

The first trailer is out for Kaley Cuoco's new HBO Max series called The Flight Attendant.  You'll never guess who she plays.  We took a look, and this falls squarely under the category of "not enough to get us to pay for HBO Max, but we'd definitely watch it if we already had the service."  The visuals are strong, it's described as a "dark comedy," which we suspect the former Big Bang Theory star can handle, and Michelle Gomez is also in the cast, which is always a bonus.  See for yourself:

There will be a Tom Petty Birthday Bash this coming Friday to celebrate the late singer who would have turned 70 years old this year.  You can catch the event online (click on the link for details.)  The star-studded line-up includes performances by, "Foo Fighters, Beck, Jackson Browne, Chris Stapleton, Brandi Carlile, Norah Jones, and more," along with a number of special guests.  Sounds like a great way to honor the musician who left way too soon.

Eddie Van Halen was a guitar god, but he wrote music that translates across instruments, like, say, two Stylophones, for example.

We're sorry to learn that singer Tony Lewis died suddenly.  No cause of death was given.  The Outfield frontman was only 62 years old.  Our condolences go out to his family and friends.

Okay kids, that's going to do it for now.  Let's have The Outfield close things out with their classic tune, "Your Love," for today's, "Song of the Day."

Thanks for stopping by, everyone.  It was great to see you, as always.  Enjoy the rest of your day, send us your podcast suggestions at info@clearingouttheclutter.com, and we'll catch up with you again soon.  Until next time, that's today's Clearing out the Clutter, and we are outta here.