Welcome back!  How are you?  It's Tuesday, so you know what that means - it's time for this week's trip to the bookstore!  Here's hoping I can finally break my recent unlucky streak and find something good for BDH and Little Buddha to read.  They're such good sports about our recent dry spell, but I'd love to get them something they can dive into for a while, especially as it's getting darker and colder outside.  Their favorite network TV shows return in November, so they have that distraction to look forward to, but nothing beats a good book.  Anyway, fingers crossed.  For now, let's check out the headlines.  The guys made coffee, so grab yourself a nice medium DD, because it's time to clear out some Clutter.

Senate Republicans confirmed Judge Amy Coney Barrett's appointment to the U.S. Supreme Court last night, thus concluding a process that was as predetermined as a WWE match.  The court now has a 6-3 conservative majority, which means regular Americans are going to get hurt.  The process was rushed because Mitch McConnell knows the GOP is going to lose on November 3, and this was his safeguard against having all of his work undone by Democrats.  McConnell's focus has always been on corrupting the judicial branch to serve Republican interests, which is why it's critical that Democrats must expand the Supreme Court to restore democracy if they take back the Senate.

Judge Barrett took her constitutional oath at an event at the White House, even though she is likely to weigh in on Donald Trump's election challenges soon, and Trump has specifically said that's why he nominated her.  This entire thing is illegitimate. 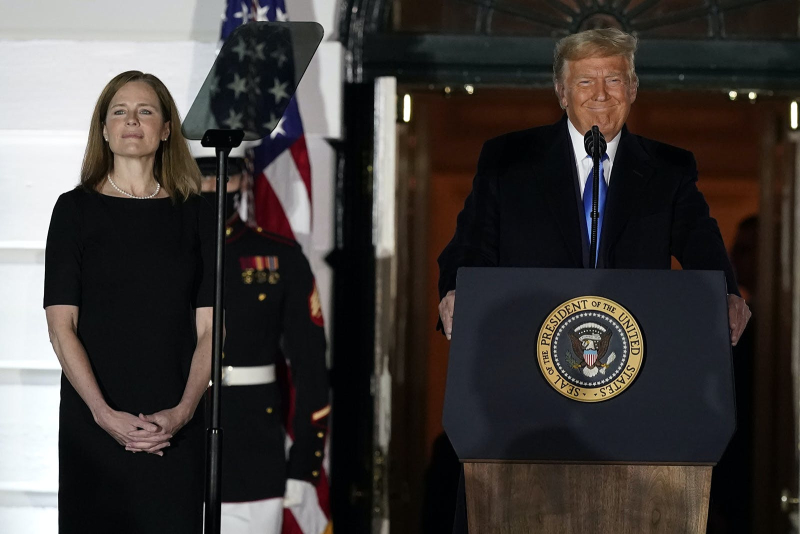 Fight the fraud and vote.  (pic via startribune.com)

Now that Mitch McConnell got what he wanted with Barrett's confirmation, he adjourned the Senate until November 9, so there won't be a coronavirus-relief bill before Election Day.  That's the GOP's priorities in a nutshell:  We get what we want, and the rest of you can die.

The Supreme Court rejected a plan from Wisconsin to allow mail-in ballots to be counted up to six days after the election as long as they were postmarked by November 3.  Now the ballots must be received by Election Day.  This ruling comes right on the heels of the court allowing Pennsylvania to have a three-day extension for their mail-in ballots.  While Chief Justice John Roberts may try to claim otherwise, it appears the Court is picking and choosing which states to interfere in, as millions people have already voted.

Over 62 million Americans have already voted, and Election Day is still a week away.  Let's not read too much into it, apart from the fact that voter motivation is clearly high this year, and people aren't letting the pandemic stop them.  However, we know that Donald Trump is banking on the U.S. Supreme Court to help him steal the win, so they only way to prevent that is to hand him an overwhelming defeat on a scale that makes his legal challenge non-viable.  Make your plan to vote, make sure your family and friends have made their plans, and let's finally cancel this show.

QAnon conspiracy believers think Donald Trump is here to save the country from a national pedophilia ring.  So how come federal prosecution of child sex trafficking cases has declined since Trump took office?

Jared Kushner is being trashed across the country for saying Black Americans should be more appreciative of what Donald Trump has done for them, and that they have to "want to be successful" so Trump can help them.  We're always surprised Kushner doesn't choke on the silver spoon in his mouth when he speaks.  The man who has been given everything in life endorses his white supremacist enabling father-in-law, and then he says people just don't want a better life badly enough.  Throw the whole MAGA crew out in the trash on November 3.

Calls continue to grow for a national mask mandate, as coronavirus case numbers surge across the country.  It's a test of a person's basic humanity:  Do they understand that science is real and that this simple act can save lives, and do they care?

A new study indicates that immunity to the coronavirus may not last that long.

If you're feeling particularly stressed about the latest coronavirus surge, this checklist of things to keep handy at home over the next few months might help you at least feel more prepared for any issues that may arise.  As always, please wear your masks and keep your distance from others while you're outside.  BDH and Little Buddha worry about you.

Burger King unveiled a new design for its stores for 2021.  The emphasis seems to be on minimal contact and a smaller space.  We don't eat fast food (after working at Burger King in the 80's, we don't recommend it for anyone), but we're curious to hear what customers think of the layouts.  It seems to make sense to us, except for the part about the food lockers.  How long do you want your Whopper sitting before you collect it?

We like Chad Finn's optimism that the New England Patriots should at least see if they can beat the Buffalo Bills on Sunday before they start trading away the team.  However, unless they crush the Bills 49-0 and Cam Newton throws for 400 yards, we think the Patriots should be making deals before next week's Tuesday deadline no matter what happens in that game.  This team needs a makeover from head to toe, so let's rip off the band-aid and try to reset the franchise before the 2021 season.

The Boston Red Sox made some roster moves yesterday.  We're under the impression that things will be in a constant state of flux throughout the winter, as Chaim Bloom continues to remake the team.

This is Us returns tonight, and apparently the coronavirus pandemic and Black Lives Matter movement will both be featured this season.  Click on the link for a brief refresher about how season 4 ended and what's ahead for season 5.

Okay kids, that's going to do it for now.  Since Halloween is coming up soon, let's close things out with Shakira and "She Wolf," for today's, "Song of the Day."

Who's in the mood to dance now?

Thanks for stopping by, everyone.  It was great to see you, as always.  Enjoy the rest of your day, wear your masks, and we'll catch up with you again soon.  Until next time, that's today's Clearing out the Clutter, and we are outta here.