Welcome back!  How are you?  BDH and Little Buddha already pointed out that today is Tuesday, just in case there was any chance I forgot they need me to go to the bookstore.  I haven't had much luck finding them anything recently, so fingers crossed that unlucky streak breaks later this morning.  Today also means that November 3 is just two weeks away.  We urge you to vote early or by mail if you can, or do it on the 3rd if you prefer, but just make sure you vote.  It's time to throw the trash in the dump.  Actually, right now, it's time to check out today's headlines.  The guys say the coffee is ready, so grab yourself a nice medium DD, and let's clear out some Clutter.

Good for the Presidential Debate Commission for approving a new rule that when Donald Trump and Joe Biden debate on Thursday, one man's microphone will be muted while the other one gives his initial response to a question.  It's pathetic that this is required, but no one needs to listen to Donald Trump yet another meltdown on national television and act like a five-year-old having a tantrum. Of course Trump is complaining that this is somehow unfair to him, so who knows, maybe he'll end up using it as an excuse not to attend again.  Skipping the debate would give him more time to seek asylum somewhere for after November 3 anyway. 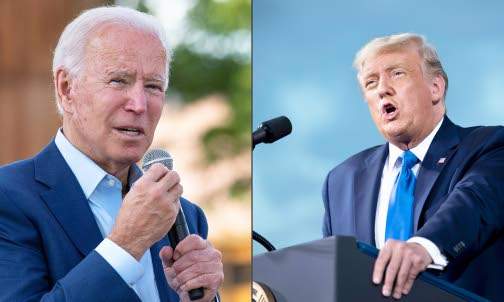 Only one candidate can be trusted to act like an adult.  (pic via jamaicaaobserver.com)

Donald Trump has raised over $1 billion since he entered the White House, yet his campaign is running out of money in the final stretch, because newsflash:  Donald Trump is bad with money.

The U.S. Supreme Court is allowing mail-in ballots in Pennsylvania to be counted if they're received within three days of Election Day.  That should also set the ground rules for any challenges from Republicans in other states.  The court was split 4-4 on the issue, with Chief Justice John Roberts siding with his liberal colleagues.  You know Amy Barrett Coney would have sided against the voters, and democracy in general, if she'd already been seated.  Assuming they take control of the White House and the Senate in 2021, Democrats must prioritize undoing Mitch McConnell's court-packing efforts of the last four years.

A lot of people showed up for the start of early voting in Florida yesterday.

The latest New York Times / Sienna College poll shows Joe Biden leading Donald Trump 50% to 41%.  The key finding is that voters don't trust Trump more than Biden on any issue, including the economy, at this point.

Secretary of State Mike Pompeo is under investigation for promising to release more of Hillary Clinton's emails before the election, because using your government office to engage in partisan political activity is illegal.  There's little doubt that Pompeo is violating the Hatch Act again.  However, as always, we wonder who will enforce consequences, because this mob has been breaking the law for years without paying a price for it.

Also, just to double-check:  Donald Trump knows that Hillary Clinton isn't running for president this time, right?  Do we all feel entirely confident that he knows this is 2020 and not 2016?  Would you bet your house on it?

Over a million passengers were screened before their flights last Sunday.  It's the first time the number has crossed that mark since the pandemic began, but it pales in comparison to the 26 million screenings that took place a year ago on the same date.  You could not get us on a plane right now.  Hopefully things will have changed by the time we'd like to head to Florida for spring training next year (assuming that starts on time), but even that isn't a given.  Also, if we saw someone on the plane who wasn't wearing a mask, one of us would have to leave immediately.  How about you?  Are you comfortable booking a flight?

Good to see that a federal appeals court rejected Ghislaine Maxwell's attempt to keep her deposition from a defamation lawsuit confidential.  The public has the right to know the details about Maxwell's relationship with notorious pedophile Jeffrey Epstein, and especially where it concerns any of the powerful men who engaged in criminal conduct with the two of them.

Apple has a new streaming channel which will play music videos.  We can see it now, parents explaining to their children that this is the modern equivalent of MTV.  Will this challenge the dominance of YouTube and Vimeo, or will people stick with options that let them play any clip at any time?

Because 2020 is obsessively providing bad news at every opportunity, actor Jeff Bridges announced he's been diagnosed with lymphoma.  We wish the 70-year-old Dude the best of luck with this fight.

We've got the official trailer for Ma Rainey's Black Bottom, which will end up being the late Chadwick Boseman's final performance.  The movie, which also stars Viola Davis, comes out on Netflix on December 18.  Have a look:

Movie cast reunion fundraisers are a big thing this year, and next up, we have Reese Witherspoon and her Legally Blonde co-stars getting together tonight to raise money for World Central Kitchen.  The gathering starts at 6:15 PM ET  on Witherspoon's YouTube channel, and we assume you can find it on the site later if you miss it this evening.

Former Journey singer Steve Perry says Eddie Van Halen once invited him to a jam session in 1985 shortly after David Lee Roth left the group.  Perry says nothing came of it, because while he was excited about the idea, he felt uncomfortable with the notion of filling Roth's shoes.  He may have been right about that, but we would have loved to hear what could have come out of that pairing.

Okay kids, that's going to do it for now.  We originally had a different tune in mind to close things out here.  However, we're going to make a hard 180 in honor of Reese Witherspoon and let Hoku  wrap everything up with, "Perfect Day," from the Legally Blonde soundtrack, for today's, "Song of the Day."

We'll be humming that one all day.

Thanks for stopping by, everyone.  It was great to see you, as always.  Enjoy the rest of your day, wear your masks, and we'll catch up with you again soon.  Until next time, that's today's Clearing out the Clutter, and we are outta here.