Welcome back!  How are you?  Everyone here is doing fine at the moment.  BDH and Little Buddha were up early working on my to-do list for today.  It made me a little nervous that they thought they needed the extra time, but they said they just wanted to make sure it was right.  It doesn't actually look all that bad, so that's good.  The guys keep reading about coronavirus case numbers moving in the wrong direction in Massachusetts, as well as most of the rest of the country, so the #1 item on the list is, "WEAR YOUR MASK, PLEASE."  Those two are always looking out for me.  They also made coffee, so grab yourself a nice medium DD, because it's time to clear out some Thursday Clutter.

Former President Barack Obama hit the campaign trail and shredded Donald Trump while speaking to supporters yesterday.  Obama hit Trump on just about every aspect of his record as well, as his shrinking TV ratings, so you know Trump will have a meltdown today.  The question is whether or not it will be on Twitter, during tonight's debate with Joe Biden, or both.  It's a good thing the Presidential Debate Commission is allowing the sporadic muting of microphones tonight, because no one needs to listen to a 90-minute Trump tirade.  Barack Obama can get under Trump's skin like almost no other person, and Democrats should put him front and center every day between now and November 3. 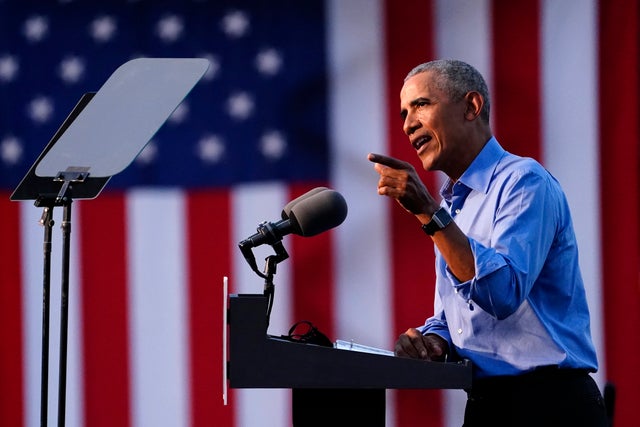 Senate Democrats are reportedly planning to boycott next Monday's Judiciary Committee vote on Judge Amy Barrett Coney's appointment to the U.S. Supreme Court.  Under Senate rules, the committee should be forbidden from conducting any business without two members of the minority party physically present.  However, Mitch McConnell and chairman Lindsay Graham don't care about following procedure - they have a judge to improperly install to protect their assault on democracy, and no one is going to stop them.  Selecting the new Judiciary Committee chair will be one of Senator Chuck Schumer's biggest decisions if Democrats take over in 2021, because ranking member Dianne Feinstein disqualified herself (and may have set herself up for another primary challenger in 2024) when she gave her seal of approval to this sham of a nomination.

Security officials say Russia and Iran have acquired voter information and are using it for misinformation campaigns.  Nothing really surprising there.  Most voter information is public anyway, so just about anyone can get it.  However, when Director of National Intelligence John Ratcliffe  says Iran was also behind some threatening emails that were sent this week to Democratic voters, that he claimed were "designed to intimidate voters, incite social unrest and damage President Trump," you know the Trump administration is doing their own misinformation.  Foreign countries are trying to intimidate Democratic voters to hurt Trump?  Come on, now.  Voters are going to get a lot of garbage thrown at them between now and November 3, so it's critical to stay focused on the task at at hand, which is removing Trump from office.

Donald Trump is reportedly considering firing FBI Director Christopher Wray after November 3 for not prosecuting Joe Biden and his son Hunter.  Actually, he didn't even need the prosecution.  Much like the extortion of Ukraine that got Trump impeached, the announcement of an investigation would have done it for him.  Let's wrap up this show and promise to never talk about bringing it back.

If Trump loses and does clean house in a fit of rage, there has to be some concern about what he'll demand of the lackeys who replace anyone who is fired.  We have to be on guard until Inauguration Day, friends.

The new Borat movie apparently features Rudy Giuliani appearing to accept a payment of a supposedly 15-year-old girl instead of cash, and subsequently fondling himself in front of the actress.  Borat Subsequent Moviefilm comes out tomorrow, so we can see if anything is missing from that description then, but anytime the words "Rudy Giuliani" appear in a story, reporters should stop talking about it, and the public should move on to the next subject.  The guy is a creepy and corrupt fraud, and the only reason he works for Donald Trump is because no one else wants to deal with the Great Pumpkin.

Coca-Cola announced that their 3rd quarter revenue dropped 9%, but they beat earning estimates, so it appears that Wall Street is happy.  The company will not provide guidance for the 4th quarter because of all of the uncertainty caused by the coronavirus pandemic.  The Clutter investment team looks at all of that and just shrugs.  They are comfortable with the decision they made years ago to buy Coke shares, but all of this just reminds them how much they prefer mutual funds over individual companies.  Talk to them about sectors, not specific businesses.

The Tampa Bay Rays beat the Los Angeles Dodgers 6-4 in Game 2 of the World Series last night to tie things up at 1-1.  Game 3 is tomorrow night.

Legally Blonde 3's release date has been pushed back to May 20, 2022.  It was originally scheduled to come out in February 2021, but you know, these days, the question now is whether or not we should take bets on the date being changed again.

BDH and Little Buddha are excited that network TV programs are starting to return.  Last night may have been the first time they've seen The Conners, and they will be back for more next week.  We won't go into spoilers here, but everyone in the cast did a nice job of showing life during the pandemic for people who are struggling economically.

Ghost is apparently planning on recording a new album in January of 2021 and then releasing it near the end of the year.

Okay kids, that's going to do it for now.  We're in the mood to wrap thing up with a tune we haven't heard in a while - here's Prince & The New Power Generation with, "7," for today's, "Song of the Day."

It used to be close to impossible to find that video, but we appreciate that Prince's estate has changed their view about making his music available online.

Thanks for stopping by, everyone.  It was great to see you, as always.  BDH and Little Buddha say you're welcome to come back tonight if you want to watch either Supernatural or the last presidential debate with them.  However, they must warn you that they may go to bed early if Donald Trump yells for more than 30 minutes.  Otherwise, enjoy the rest of your day, wear your masks, and we'll catch up with you again soon.  Until next time, that's today's Clearing out the Clutter, and we are outta here.