Welcome back!  How's your weekend been so far?  No complaints on this end.  As far as we can tell, today's New England Patriots game against the San Francisco 49ers is still happening, so that's nice.  I'm going to hop on the treadmill at some point before that to start getting back into an exercise routine.  Nothing crazy, maybe just a brisk 30-minute walk.  I could do it outside, but it would be nice not to have to worry about being around other people for a bit.  After consulting with my trainers (BDH and Little Buddha), I'm counting on this sort of stuff to help me me stay focused as it gets darker and colder in the weeks and months ahead.  Anyway, let's check out the headlines.  The guys made coffee, so grab yourself a nice medium DD, because it's time to clear out some Sunday Clutter.

As coronavirus cases continue to rise dramatically across the United States again, Dr. Anthony Fauci now thinks it may be time for a federal mask mandate.  That's a reversal from his earlier statements.  However, he made those comments back when he assumed Americans would just do the right thing on their own, and that was clearly too optimistic.  Staying healthy isn't a partisan issue, nor is it a matter of toughness.  Science (which is real, despite Republican claims otherwise) tells us that wearing masks can help control the pandemic.  Over 225,000 Americans have died so far because of the coronavirus, and scientists predict the number could pass 400,000 by the end of the year if we don't take action.  Many of those 175,000 possible deaths are preventable.  All we need to do is follow public health experts (not failed casino operators) and show a basic humanity and common sense. 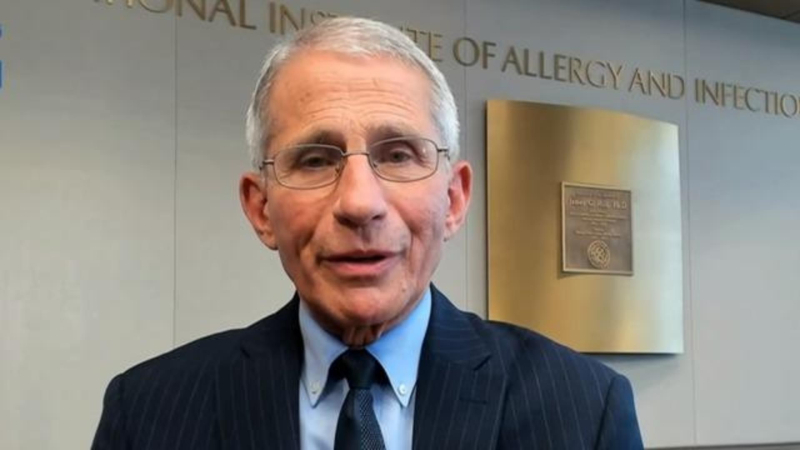 Listen to the doctor and wear your mask. (pic via cbsnews.com)

Mike Pence's chief of staff and top political aide both have both tested positive for the coronavirus.  We're just going to remind people one more time that the guy in charge of the country's pandemic response did such a terrible job handling an HIV outbreak when he was Indiana governor, people have done studies on his mismanagement.  There are nine days left to throw Pence and Donald Trump out on the street so we can finally deal with this crisis with a reality-based approach.

Donald Trump is hosting a super-spreader event/rally in New Hampshire today.  Let this be the last time he pollutes the Granite State with his presence.

Former President Barack Obama seems to be enjoying his new freedom to go after Donald Trump.  It's got to feel good to let it all out after holding everything in for 3 1/2 years.  That is one of many reasons why he should have started sharing his thoughts much earlier than this.

Of course SNL had to weigh in on this week's presidential debate.  Let the countdown to someone replacing Jim Carrey as Joe Biden begin:

Senator Lisa Murkowski(R-Alaska) originally claimed she opposed sitting a new justice on the U.S. Supreme Court before the election, but she's still going to vote for Judge Amy Barrett Coney anyway.  No one in the GOP has a backbone, or any interest in preserving democracy for that matter.  Republicans are a shrinking percentage of the population.  They know it, which is why they'll do anything to stay in power even when they can't win fair elections.

Remember murder hornets?  They're still a thing, as a crew wiped out the first nest found in the United States on Saturday.  Researchers will continue to look to see if there are other nests in that part of Washington State.  We've got to do whatever we can to protect the world's honeybees.

We just checked again, and it still looks like the New England Patrots are playing the San Francisco 49ers later this afternoon.  (These days, you can't take any games for granted until kickoff.)  This is probably a must-win for the 2-3 Patriots, and we assume they'll get the job done.  It would be hard for them to play as poorly as they did last week against the Denver Broncos, and they've got a number of factors in their favor to avoid a repeat of that mess:  1) The team had a full week of practice this time; 2) They're not missing anyone major, and in fact, center David Andrews is back, which allows everyone on the offensive line to go back to their regular positions; 3) The San Francisco 49ers are banged-up, including quarterback Jimmy Garoppolo, who is still dealing with an ankle sprain; and 4) The game is at home.  We like to think that all adds up to a Patriots win, but it's going to be a major issue if we're wrong.

Apparently Tom Brady's dreams are about to come true, because Antonio Brown is reportedly about to sign a one-year deal with the Tampa Bay Buccaneers.  The wide receiver/team destroyer can join the Bucs for Week 9, and then let the countdown to Tampa Bay's implosion begin.  we have no idea why Brady is so obsessed with Brown, but it's not our problem anymore, so pass the popcorn.

The Tampa Bay Rays beat the Los Angeles Dodgers 8-7 last night, thanks to a two-out/two-strike comeback,  to tie the World Series at two games apiece.  You've got to read this account of the end of the game to appreciate how bizarre it was, but now we find ourselves wondering, could the Rays win it all?  The Dodgers' meltdown is the kind of thing that could derail them, and if Tampa wins Game 5 tonight, Los Angeles may not recover.

You know what, just click this link to watch the video of the whole thing.  (Don't know why MLB.com apparently doesn't allow embedded video anymore.  That feels out of touch.)

We watched Borat Subsequent Moviefilm on Friday, and it was a mixed bag.   We'll keep this spoiler-free, but there are parts that lag, and parts that are funny.  Misogyny is the overwhelming theme of the film, but by the end, it turns out that you've just watched a feminist movie, which is not something we were expecting.  Oh, and that Rudy Giuliani clip is exactly what it looks like.  Overall, we'd give it a B/B+.

We also had the chance to catch up on this week's Supernatural episode, and it was solid.  (Warning: spoilers ahead.)  It was another opportunity to see Sam and Dean Winchester when they were kids, which gave viewers the chance to wonder what they might have been like as adults if this hadn't been their lives from the beginning.  (We wonder if the series finale might somehow rewrite their lives.)  Mainly, the big development was Billie telling Dean that Chuck is done with all of the other worlds, and now he's coming to ours.  The brothers are also fighting, because Sam just found out about Jack's apparent doomed fate, but they've only got four episodes left to get on the same page and save everyone one last time.

"One Chicago" returns to NBC on November 11, and tvline.com has a strong wish-list of things they'd like to see happen for all of the shows this year.

Okay kids, that's going to do it for now.  Let's close things out with some Huey Lewis and the News and, "Heart and Soul," for today's, "Song of the Day."

Thanks for stopping by, everyone.  It was a treat to see you, as always.  Enjoy the rest of your day, wear your masks, and we'll catch up with you again soon.  Until next time, that's today's Clearing out the Clutter, and we are outta here.