Welcome back!  How are you?  BDH and Little Buddha were just asking what time I thought you would get here, and here you are!  How was the rest of your weekend?  We had a good Sunday, apart from the Patriots game.  I repotted another plant, which is often a bit stressful, but I think it went well.  The plant definitely needed more space.  Not sure I'm ready for the start of a new week, but the guys say today's to-do list isn't that bad, and the weather should be okay, so I guess we'll ease into things.  First, we have to check out today's headlines.  There's a fresh pot of coffee on the counter, so grab yourself a nice medium DD, because it's time to clear out some Monday Clutter.

Donald Trump's latest attack on Joe Biden is that Biden...listens to scientists.  Yeah, like those guys know better than a failed casino operator and WWE Hall of Famer who likely owes over $1 billion to unspecified creditors and has allowed over 220,000 American deaths because of his incompetence and ignorance. 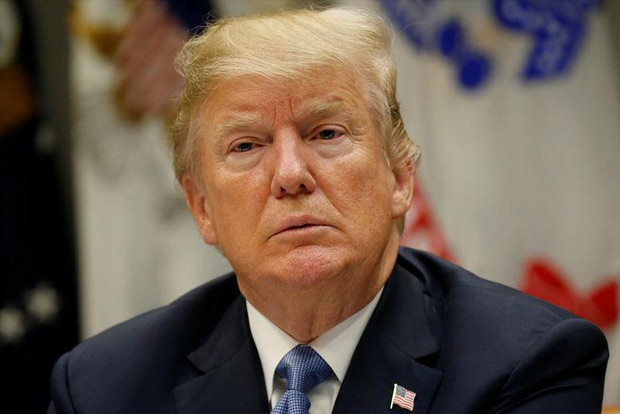 A dangerous fool who is almost out of time. (pic via dtnext.in)

Donald Trump's debate advisors are reportedly telling him to try to be more "likeable" during the final debate this coming Thursday.  The ship sailed on that one about 74 years ago.  Where should we set the over/under on Trump's first interruption of Joe Biden or personal attack on Biden's family?  We'll set the line at within the first five minutes of the debate and strongly encourage folks to take the under.

Good for Twitter for blocking a false tweet from Trump adviser Doctor Scott Atlas that claimed masks don't help prevent the spread of the coronavirus.  Atlas is a quack with no expertise in this field.  The public health community overwhelmingly supports wearing masks, and at this point, it feels like the Trump administration has gone from incompetence to actively trying to kill people.  Donald Trump is likely going to lose the election in 15 days.  His legal protections from being prosecuted for his many alleged crimes are about to expire.  He's a desperate, angry, vindictive, and petty man, and you can expect him, along with the rest of his lackeys, to bring the ugliness to a whole new level between now and Inauguration Day.

It's estimated that over 27 million ballots have already been cast, which is more than 20% of the total number of ballots in the 2016 presidential election.  Early voting starts in more states this week.  In an ideal world, there will be enough of a voting surge to hand Donald Trump a decisive loss on November 3 before he even has a chance to try to win through rigged courts.  However, we can't assume anything.  Go vote, make sure the people around you are going to vote (unless they're MAGA cult members), and keep pushing for another two weeks.

Donald Trump lives in his fantasy world where the coronavirus pandemic is over.  However, here in reality, the battleground states of Michigan, Ohio, North Carolina and Wisconsin are setting records for new cases, as numbers get worse across the country.   There's also the fact that coronavirus-related restrictions are coming back in Europe, and that could be a sign of what's to come in the months ahead for the United States.

In case you were wondering, Doctor Anthony Fauci is not surprised Donald Trump got sick.

Senator John Cornyn (R-Texas) is the latest Republican to try to start putting distance between himself and Donald Trump.  Cornyn says he's had plenty of policy disagreements with Trump over the years, but he just didn't want to deal with the hassle of making them public.   That's some real leadership and courage, right there.  Wait, that's not the right description.  The senator is currently facing a tough challenge from MJ Hegar, and the fact that he's jumping ship now tells you he thinks both he and Trump could lose in Texas, which is remarkable.

Massachusetts lawmakers extended their deadlines at the end of July to give themselves more time to work on major legislation.  However, no one has heard from Beacon Hill since, as legislators are busy running for re-election.  They dropped the ball for their constituents in the middle of a pandemic, and the failure to take any action to prevent the possible oncoming wave of mass evictions is particularly appalling.

We admit it, we were a little lazy with yesterday's New England Patriots - Denver Broncos prediction.  Cam Newton hadn't played in three weeks after testing positive for the coronavirus, and the Patriots barely saw the practice field over the last two weeks as they dealt with coronavirus issues at their facility and multiple positive tests.  Oh, and the Patriots offensive line was in shambles both before and during the game.  Of course, there's also the issue that the offense isn't all that strong in the first place.  Even with all of that, we just trusted that Bill Belichick would figure out a way to win the game, which was not the case, as the Patriots lost 18-12 to the Broncos.

Cam Newton looked like he was buried in rust, as he went just 17/25 for 157 yards with no touchdowns and two interceptions.  He was team's leading rusher for the day, going 76 yards on 10 attempts.  The Patriots defense did their job by keeping Denver to six field goals, but it wasn't enough.  The 2-3 Patriots move on to face the San Francisco 49ers next week.  That's assuming half the team doesn't get sick, or the league doesn't shut down before then.

Congratulations to the Los Angeles Dodgers on beating the Atlanta Braves 4-3 to advance to the World Series last night.  This is the third time the Dodgers have been in the World Series in the last four years.  They're o-2 so far, so while we're mostly rooting for the Tampa Bay Rays to win their first championship in franchise history, we're also fine with the idea of Mookie Betts and Dave Roberts winning it all.  It's a good story either way, and when it's all said and done, we can finally forget about the 2020 "season," which will be terrific.

If you want to hang out with the Avengers tomorrow night, all you have to do is donate to Joe Biden's campaign before the event.  Any amount is enough to attend, so you can both hang out with movie stars and help protect this country at the same time.  Pretty good deal.

The Avengers aren't the only celebrities to sign on to Team Biden:  The Beastie Boys are allowing the campaign to use their classic song, "Sabotage," in an ad lamenting the loss of live music caused by Donald Trump's incompetent handling of the pandemic.  Check it out:

As we've noted before, Jim Carrey's impression of Joe Biden is a misfire.   It doesn't capture Biden at all, and it feels somewhat threatening.  If Biden wins, Saturday Night Live will need to recast, because the country won't want four years of this.  Our preference is still for Woody Harrelson to return, but if he can't do it, bring back Jason Sudeikis.

Okay kids, that's going to do it for now.  Let's ease into the week by having Lauryn Hill close things out with, "Everything is Everything," for today's, "Song of the Day."

Thanks for stopping by, everyone.  It was great to see you, as always.  Enjoy the rest of your day, wear your mask, and we'll catch up with you again soon.  Until next time, that's today's Clearing out the Clutter, and we are outta here.