Welcome back!  How are you?  Sorry we missed you yesterday.  I had a morning appointment, followed by an afternoon Zoom call, and there just wasn't time to check in between the two.  BDH and Little Buddha were determined we not go two days in a row without seeing you, so here we are!  What's on tap for the weekend?  I'm pretty sure we're still doing Halloween tomorrow.  It just doesn't feel like a good idea this year, but there will probably still be a little bag of goodies for the guys to enjoy.  They've been so good about everything, they deserve a treat now and again.  Other than that, the big item is a must-win game for the New England Patriots on Sunday.  Right now, the immediate concern is taking a look at the headlines, so grab yourself a nice medium DD, because it's time to clear out some Friday Clutter.

The numbers are clear:  When Donald Trump holds a rally, a coronavirus spike usually appears shortly afterwards.  How about we shake things up in 2021 and have a White House occupant who isn't trying to kill everyone?

Experts warn that the U.S. daily death rate from the coronavirus could triple by mid-January if we don't take the right approach.  There's no need for us to get to a level of 2,250 deaths every day when we know what we have to do.  Friends, please wear your masks and keep your distance from others.  We know this is a drag, and it's been going on for far too long, but the virus doesn't care that we're tired.  We can do this.

Donald Trump's top white nationalist adviser Stephen Miller is panting at the idea of being able to make this country's immigration policy even more racist if Trump gets a second term.  Miller was happy to kidnap immigrant children in the first term, so just imagine how he'd react if his boss isn't worried about seeking re-election again.  He is an abomination who must be sent packing along with the rest of them in November.

Senator Kelly Loeffler (R-Georgia) says she's "not familiar" with Donald Trump's infamous Access Hollywood tape where he bragged about sexually assaulting women.  The choices are either that she's brazenly lying, or she's completely ignorant about one of the most commonly-known topics in the country.  Either way, add that to the fact that Senator Loeffler (who was appointed to the seat in December 2019) brags about voting 100% of the time with Trump, and she's got to go.  Georgia friends, send this woman packing and give the Democratic candidate Rev. Raphael Warnock over 50% of the vote so there's no runoff involving these two and/or Representative Doug Collins, who is also a Trump lackey.  Everyone who supported this racist, misogynistic, incompetent, and impeached fool should pay the price for the rest of their careers, and Tuesday is a perfect place to start.

Joe Biden's campaign says Facebook improperly rejected thousands of their campaign ads for this week, as we head into the final stretch of the presidential election.  We're already on record saying that Facebook's current ban on most political ads, which started last Tuesday, was a bad idea in genera.  However, whether it's through incompetence or bias, the platform clearly seems to be giving Donald Trump preferential treatment once again.  This company should be broken up once a new administration takes over.

Cheers to attorney Matthew Coyte who is forcing reforms over the use of solitary confinement by winning large settlements against prisons using the practice.  Solitary confinement is inhumane, and if officials won't make changes because it's the right thing to do, good for Coyte and his colleagues for making it too expensive to continue with business as usual.

Good for New Zealand voters for approving an assisted suicide law.  Suicide shouldn't be illegal in the first place, but terminally ill patients should be able to determine how they want to end their lives.

New England Patriots wide receiver Julian Edelman had a knee procedure done on Thursday and is expected to be out for "some period of time."  (That's helpful.)  You have to wonder if he might have played his last game for the Patriots, especially if they're out of contention by the time he's able to return.  Edelman is 34 years old, and that's getting long in the tooth at that position.  Heck, we'll take it one step further.  Is this a wrap for him?  He's been playing in pain for years, and now that TB12 is gone and New England is sinking, maybe it's time to think about calling it a career.  We'll give it a 55% chance he's done.  What do you think? 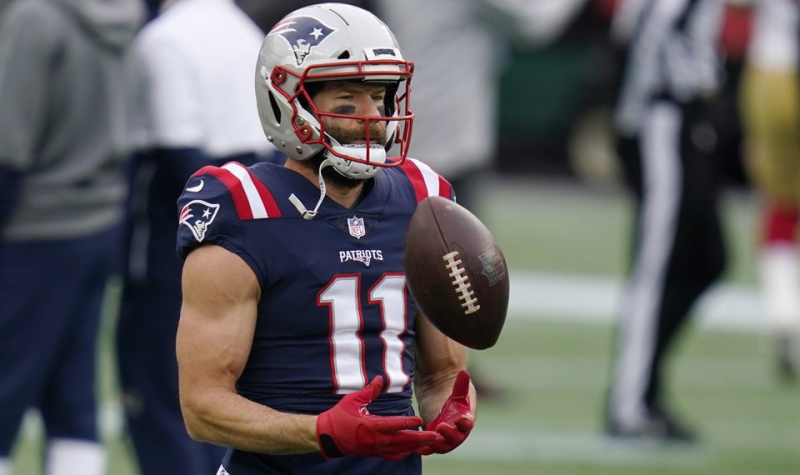 Is this the end of the road for Julian Edelman?  (pic via oklahoman.com)

The more we think about it, the more we believe Los Angeles Dodgers third baseman Justin Turner must be suspended for breaking quarantine at the end of the World Series.  If guys like Alex Cora get a year for cheating, Turner should get at least that for placing the health of those around him at-risk, and frankly, a lifetime ban also feels reasonable.  There's no excuse for Turner's selfishness. He knew he tested positive for the coronavirus, multiple people told him to get off the field, and he refused, so now everyone he came into contact with in the Dodgers organization recently should be quarantining for two weeks.  It's outrageous.

We became baseball fans in 1982, and the Chicago White Sox manager at the time was Tony La Russa.  Fast-forward to 2020, and the Chicago White Sox manager is now...Tony La Russa.  There really wasn't a better choice available?  The 76-year-old is one of the kings of the baseball analytics movement, so we don't expect him to have any issues on that front, but we're curious to see how well he'll relate to modern baseball players on a daily basis.  We're not being ageist - 71-year-old Dusty Baker brought the Houston Astros to the post-season this year, but still, we're interested in seeing how that works.  The White Sox feel like they're on the verge of a good run.  Will La Russa put them over the top or set them back?

We were saddened by the news that former Boston University hockey player Travis Roy died yesterday at age 45.  Roy broke his 4th vertebrae 11 seconds into his first shift of his first collegiate game in 1995, and it left him a quadriplegic.  He then spent the remainder of his life as a philanthropist for spinal cord injury patients and treatments.  We never heard anyone speak about Roy in anything less than glowing terms, and the tributes flooded social media as the news of his passing spread yesterday.  Our condolences go out to his family, friends, and people whose lives were made better because of his work.

WWE boss Vince McMahon's life will be the subject of a multi-part documentary on Netflix.  McMahon is working on the project with executive producer Bill Simmons, so while we're interested to see what ground they cover, we expect the b.s. level to be off the charts for this one.

Netflix just implemented another price hike yesterday.  As you know, we've been holding off on getting Apple TV+ or HBO Max, but should we drop Netflix to pick up one of those two?  It's constantly right on the edge of feeling like a waste of money.  Should we make a switch?

Meanwhile, we hadn't really thought about this, but it makes sense:  You don't actually own anything that you buy on Amazon Prime Video.  You're buying a limited license to watch the content, and the company can revoke that access at any time.

George Clooney has a new movie coming out on Netflix called The Midnight Sky.  Clooney plays a scientist in the Arctic who has to warn some astronauts (including the fantastic Felicity Jones) not to return to Earth after the planet has suffered some kind of global catastrophe.  The movie comes out on December 23, so it sounds like great Christmas fun for the entire family.  Really, the trailer looks fantastic, so we're putting this one down on the to-watch list:

On the flip side, we can't begin to describe how excited we are to never watch Michael Bay's upcoming, Songbird.  A horror movie about the coronavirus pandemic?  That's a hard hard pass:

You know we try to avoid click-bait sort of links as much as possible, but BDH and Little Buddha don't want to give away any spoilers, so click here to find out what the babysitter in Borat Subsequent Moviefilm thought about her time with actress Maria Bakalova (who deserves an Oscar nomination for her performance.)

(Reminder: spoilers ahead)  We got a little confused earlier this week and spent most of Wednesday thinking we'd be watching the latest Supernatural episode, only to be reminded that night that the show now airs on Thursdays.  Considering how crazy this year has been, it's a wonder we don't make that mistake more often.  Now that we've actually seen this week's show, let's discuss:

The whole season got thrown a curve ball when Sam Winchester found out that Death wants to become the next God.  That's no good, and it meant scrapping the plan to kill Chuck, except that Jack already lit the fuse.  Unfortunate, but we're confident he will end up surviving at the end of the series.  Still pretty sure that his recovery will lead to Castiel's demise and banishment to the Empty, but that sets up the limited series return in a few years.  There are only three episodes left, and Jensen Ackles and Jared Padalecki have both said the season ends with the penultimate episode, but the series ends with the finale, so there's not much time to end this adventure.

Rolling Stone has a terrific tribute to the life and times of Eddie Van Halen.  It's still hard to believe that the guitar is no longer with us.  At 65 years old, we should have had much more time to enjoy his talents.  That one will hurt for years to come.

Okay kids, that's going to do it for now.  Since we probably won't be back again until Sunday, there's really only one right way to close things out here: In honor of Halloween, we give you Michael Jackson's, "Thriller," for today's, "Song of the Day."

Thanks for stopping by, everyone.  It was great to see you, as always.  BDH and Little Buddha aren't sure what they'll be up to this evening, but you're welcome to join them if you ant to hang out again for a while.  Maybe there's a new movie playing or something.  (If so, would you mind bringing the popcorn?)  Otherwise, enjoy the rest of of your day, wear your masks, and we'll catch up with you again soon.  Until next time, that's today's Clearing out the Clutter, and we are outta here.