Welcome back, and congratulations on making it to the end of yet another week.  Well done!  This year, man.  I just found out yesterday that someone who had a huge impact on me years ago died this past summer.  We don't need to get into the details, but I owe him a lot, and all I can do now is say thanks, Mike.  You were one of the good guys.  So, what's the plan for the weekend?  We've got the usual yard work and New England Patriots game on the to-do list.  Nothing too crazy, and that's fine with us.  Let's check out the headlines.  BDH and Little Buddha made a fresh pot of coffee, so grab yourself a nice medium DD, because it's time to clear out some Friday Clutter.

Look at that, Donald Trump didn't have another meltdown at last night's presidential debate after all.  That's surprising.  However, at the end of the day, Trump was still Trump, and his dishonesty and callousness came pouring through the television.  He still lives in an alternate universe where the coronavirus pandemic which has now killed 223,000 Americans is no big deal.  He also thinks that the 545 immigrant children who were stolen from their parents by his administration are doing great, saying, "They are so well taken care of. They are in facilities that are so clean."  There was nothing about this debate that helped Trump make up ground.  He needed Joe Biden to make a big mistake, and that never happened.  With November 3 just 11 days away, Trump's only real hope of staying in the White House remains trying to steal a win through the courts. 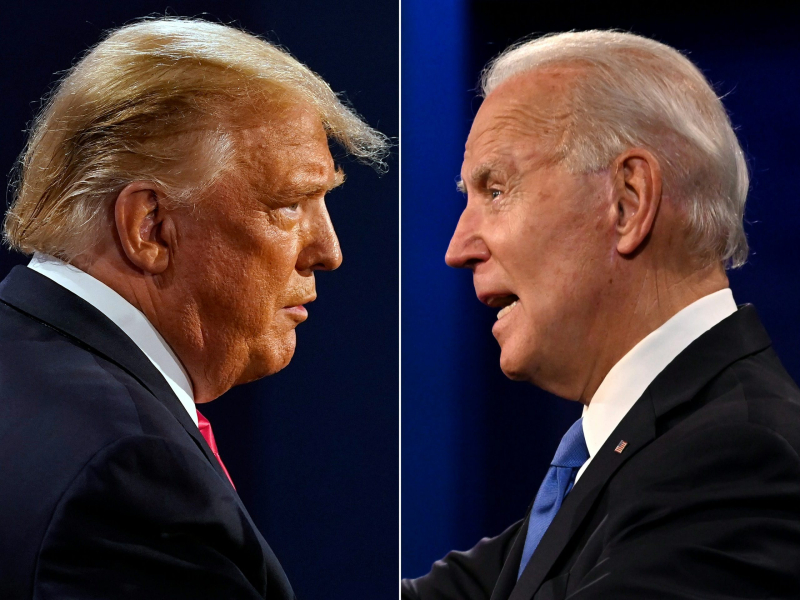 Nothing changed last night, so the win goes to Joe Biden.  (pic via hyderabadmorningpost.com)

Donald Trump released the footage of him berating and then walking out on 60 Minutes co-anchor Leslie Stahl.  Maybe that gets his misogynistic cult followers excited, but it doesn't get him a single new vote, which should be the goal.  All it does is show him as a petulant man-child who gets upset when anyone, particularly a woman, pushes back when he lies to her face.

The Trump campaign is videotaping voters in Pennsylvania, as their candidate desperately looks for any means of intimidation he can find to suppress the vote in the critical battleground state.

Borat came to Rudy Giuliani's defense after filming Giuliani in a compromising situation with an actress pretending to be Borat's 15-year-old daughter.  His comment was, "I here to defend America's mayor Rudolph Giuliani. What was an innocent sexy time encounter with a consenting man and my 15-year-old daughter has been turned into something disgusting by fake news media," so that should settle that.  By the way, has anyone ever determined if Giuliani knew Jeffrey Epstein?  Seems fair to ask, since the men shared a Donald Trump connection.

We didn't want to comment on this until we had confirmation that the pictures are real, but now that it's been established they're legit,  we have to ask:  Why do Senate Majority Leader Mitch McConnell's hands look like they're about to fall off?  They seem to be deeply bruised, and he's been wearing bandages recently, but of course he denies there's a health issue that the public needs to know about.

The number of confirmed coronavirus cases in the United States hit a new high yesterday, and the number of confirmed Massachusetts coronavirus cases also reached a five-month high on Thursday.   As much as Donald Trump loves to tell himself otherwise, this isn't a partisan issue.  It's clear that Governor Charlie Baker and other officials will have to look at rolling back some of the reopening efforts in Massachusetts, because we are moving in the wrong direction and picking up steam.

Police in Waukegan, Illinois shot an unarmed black couple on Tuesday night, killing Marcellis Stinnette and wounding Tafarra Willams.  Before we even get to the issue of defunding the police, there's no reason that the names of the officers who did this can't be released to the public.  If the situation was reversed, the identity of someone who shot an officer would be all over the news.

It's huge that Pope Francis came out in support of civil unions for same-sex couples earlier this week.  He took that position earlier in his career, but this is the first time he's said it since assuming his current role.  Now the question is how homophobic Catholics will react.  We can see some public officials trying to claim that the church is bigger than the Pope, while others will somehow try to minimize what he said.  However, it's still a major step forward in the name of equality for all if Pope Francis can drag the church into the 20th century.

Coca-Cola is cutting 200 drink brands.  It may surprise some folks to hear that they have that many to cancel, but the company says these are low-selling names that are often only available in certain markets, and they account for 2% of total revenue.

A California appeals court says Uber and Lyft must reclassify their drivers as employees.  Meanwhile, the ride-sharing companies have spent over $200 million on a state ballot question to block this, because they say they can't afford the reclassification.

This is interesting:  Guinness is releasing an alcohol-free version of their signature stout.  It will only be available in the U.K. and Ireland for now, but we might be interested in having a pint if it eventually comes to the United States.

Here we go again:  The Las Vegas Raiders put four offensive linemen and one safety on the reserve/COVID-19 list yesterday.  The Raiders were originally scheduled to face Tom Brady and the Tampa Bay Buccaneers on Sunday night, but now the game has been moved to 4:05 in case it has to be postponed.

Seattle Seahawks quarterback Russell Wilson wants disgraced wide receiver Antonio Brown to join the team.  Someone should see if Wilson can pass the concussion protocol.  We don't care where Brown goes, as long as it's not a return to the New England Patriots.  However, we will openly mock any team foolish enough to bring this disaster into their locker room.  Brown's ability to catch a football doesn't compare to his skill level of being a distraction and wrecking team chemistry.

We weren't able to watch last night's Supernatural, because we were on a Zoom call at the time, so no discussion about the episode until the next time we see you.

Okay kids, that's going to do it for now.  Here's Ariana Grande to close things out with her latest single, "positions," for today's, "Song of the Day."

Thanks for stopping by, everyone.  It was great to see you, as always.  BDH and Little Buddha invite you to come back later to watch Supernatural with them if you're around.  Otherwise, enjoy the rest of your day, wear your masks, and we'll catch up with you again soon.  Until next time, that's today's Clearing out the Clutter, and we are outta here.