Welcome back!  How are you?  Yesterday was some adventure, thanks to Tropical Storm Isaias.  I got BDH and Little Buddha some snacks and something to read after we were done here, and then we settled in and waited for the storm to arrive.  It was starting to seem like nothing was going to happen, but the rain came around 6:00, and then the wind picked up for the rest of the evening, which made getting to sleep a little difficult.  Luckily, we didn't lose power, but we did lose two tree branches, which is disappointing.

One of the branches was hanging over the driveway.  I meant to have someone look at it, but I guess I can take that off the to-do list.  The other one might be more troubling.  It seemed to be barely hanging on, so I thought maybe I could just pull it off, but I ended up pulling the bark down further before it finally came free.  I hope it's not a fatal wound.  Anyway, Like I said, it was an adventure, but we're back, and BDH and Little Buddha made coffee.  Grab yourself a nice medium DD, and let's clear out some Wednesday Clutter.

Donald Trump's interview with Jonathan Swan was a disaster for him on every front.  He came across as a bumbling and inept fool who wilted when he received the slightest amount of sustained pushback from Swan.  (We didn't say it was an inaccurate interview.)   When asked about the 150,000 people who have died under his watch from the coronavirus, Trump replied, "It is what it is."  That soundbite should be played on a loop every day between now and November 3.  When it comes time for the debates, all Joe Biden has to do is repeatedly say, "One person on this stage cares about your well-being, and the other one does not." 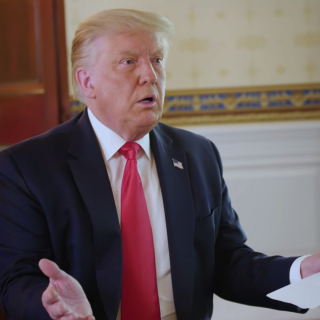 "What do you mean, I'm supposed to care about other people?" (pic via nymag.com)

Donald Trump suddenly decided he loves mail-in voting, in states with Republican governors, like Florida, for example.  He's doing everything he can to steal this election, and he's not subtle about it.

Congratulations to Cori Bush for defeating Representative William Lacy Clay (D-Missouri) in Missouri's Democratic primary yesterday.  Bush ran against Clay in 2018 and came up short, but the progressive pastor/activist was the victor in the rematch.  Her win breaks the Clay family's 50-year grip on that House seat, and Bush is expected to win the general election in November. This is a huge pickup for progressives, as leaders like Representative Alexandria Ocasio-Cortez will gain another ally in Washington.

Former Kansas Secretary of State Kris Kobach apparently lost the Republican Senate Primary to State Representative Roger Marshall yesterday.  Marshall now moves on to face State Senator Barbara Bollier (D) in November.  We don't know much about Marshall, and maybe this makes it harder for Democrats to try to replace retiring Senator Pat Roberts (R), but any defeat of the conspiracy theory promoting/racist Kobach is fine with us.

The Boston Globe has taken a lot of heat for recently endorsing Jake Auchincloss to replace Representative Joe Kennedy in the Massachusetts 4th Congressional District, in light of claims that Auchincloss isn't as progressive as his challengers.  Now the Globe published this article contradicting the Auchincloss campaign's claim that the candidate was an early supporter of Donald Trump's impeachment.  Is the newspaper having second thoughts about their endorsement?

Our thoughts go out to the people of Beirut after a devastating explosion killed at least 100 people and injured thousands yesterday.  The cause of the explosion has not been confirmed, so unlike Donald Trump, we're not going to just make one up off the top of our heads.

In case you missed this, Kodak has apparently transformed from a photography company to a pharmaceutical business.  Donald Trump recently announced that the company was receiving a loan of $765 million to make the transition, and the stock price soared, going up as much as 2,190% within two days of the news.  The issue is that the stock started going up the day before the announcement, so now the SEC is investigating who bought the stock beforehand.  We're going to assume insider information was shared here.  Our question is, how many of the involved people have ties to Donald Trump, a man who has no problem looking for his cut of any shifty deal?

The Boston Red Sox lost 5-1 to the Tampa Bay Rays last night to fall to 3-8 on the season.  Nate Eovaldi was doing well for the first three innings.  However, he ran into some trouble in the 4th when he couldn't stop the Rays from scoring after he was denied a third-strike call that should have ended the inning.  The Boston bats were quiet, apart from Mitch Moreland's solo home run in the second inning.  Martin Pérez takes the mound for Boston against the Rays tonight, as the Sox try to both snap another four-game losing streak and make it out of Florida without a coronavirus outbreak taking down the team.

Dwayne "The Rock" Johnson gets worldwide media coverage, but you should check out this piece about his ex-wife/current business partner Dany Garcia.  She's the woman who is the architect of Johnson's empire, and is now set to become the first female co-owner of the sports league, as the two teamed up (with another partner) to buy the bankrupt XFL.  Written by Shalise Manza Young, the profile makes it clear that Garcia is a badass, and if anyone can figure out how to make the XFL actually work, our money is on her.  (Also, you should be following Shalise on Twitter.)

Disney's new movie Mulan is coming to Disney+ on September 4 for a fee of $29.99 on top of the usual monthly subscription.  The move comes in light of the fact that it's still unclear when theaters will be able to safely reopen across the country.   You have to see this as a warning sign for the future of theaters, although Disney says it's currently a one-team deal.   We weren't going to see this in the theater, so we're certainly not paying $30 to see it on TV (assuming non-subscribers can buy it in the first place.)  However, now that this door is open, it seems likely that other big films will follow suit, so get back to us when it's time to make a call about Black Widow in November.

We're in no rush for the summer to end, but we are looking forward to Season 2 of The Boys starting on Amazon Video on September 4.  The first official full-length trailer is here, and it looks like things are going to be even more messed up than they were last time, which is a tough bar to clear.  Have a look:

There's apparently a Who's the Boss? reboot in the works.  The new show will star Alyssa Milano and Tony Danza, but it doesn't appear Judith Light or Danny Pintauro are involved at the moment.  That's too bad about the former, but we're fine with the latter not being there.  Our first thought is this could work, maybe like The Connors, with Milano's Sam Micelli as a single mother and Danza should be in a supporting role.  The show is still looking for a home, so we'll let you know when we hear an update.

We've reached the point in the Ellen DeGeneres saga where her celebrity friends are publicly defending the embattled talk show host.  Pretty sure no one is accusing her of being mean to famous people like Kevin Hart.

Sammy Hagar & the Circle will apparently play live for a charity event at the Rock & Roll Hall of Fame on September 18.  Hagar said months ago he was willing to put his life on the line and perform live before the coronavirus pandemic was under control, so he's a man of his word.  Don't have much in the way of other details for the event, but we hope the Hall of Fame has safety protocols in place for events they host.

Okay kids, that's going to do it for now.  Should probably double-check that we didn't miss any other damage from last night's storm.  Feeling a bit of a Prince vibe at the moment, so how about we have him close things out with, "Sign O' The Times," for today's, "Song of the Day."