Welcome back!  How are you?  It looks pretty dark outside, as we wait for Tropical Storm Isaias to arrive.  BDH and Little Buddha are both excited and a little bit nervous.  They've already plugged in my phone to make sure it's fully charged in case we lose power, and they want to know what time I'm going grocery shopping when we're done here.  The fun is currently supposed to start this afternoon, so hopefully I'll be able to get a trip to the bookstore in after getting the food, so I can find them something to read.  First, let's check out the headlines.  There's a fresh pot of coffee on the counter, so grab yourself a nice medium DD, because it's time to clear out some Tuesday Clutter.

Donald Trump is angry at Dr. Deborah Birx for recently admitting that the coronavirus is widespread in the United States.  Trump hates when reality doesn't work in his favor, which is why he's so angry all the time.  It's telling that over 150,000 Americans have died during this pandemic, and his only concern is how well he's being treated:

The dynamics behind this obsessive and self-centered whining and refusal to acknowledge facts are spelled out in Mary Trump's recent book about her uncle.  Trump's father Fred was incapable of addressing anyone's needs but his own, and he hammered home in his son that Donald should behave as if he was a genius, even if all available evidence showed otherwise.  There will only ever be one priority in Donald Trump's life:  Donald Trump.

Donald  Trump claimed to have the power to issue an executive order on mail-in voting yesterday, so you know he's warning everyone right now he's preparing to commit fraud.  He wasn't specific about what the order would say, but the only point of it is to steal a victory, as national polls continue to show him getting walloped on November 3.  Trump has no authority to do anything of the kind, since the U.S. Constitution expressly puts states in charge of their own elections.  However, if Republicans are willing to cover for him, you know there's nothing he won't try in order to stay out of jail.

Donald Trump said the U.S. Treasury should get a cut if an American company buys TikTok, and that he's looking to shut the site down in September if that doesn't happen.  It's extortion for the world to see, because Trump knows his time is running out, and he's trying to grab every last dollar he can before voters throw him out of the White House in November. 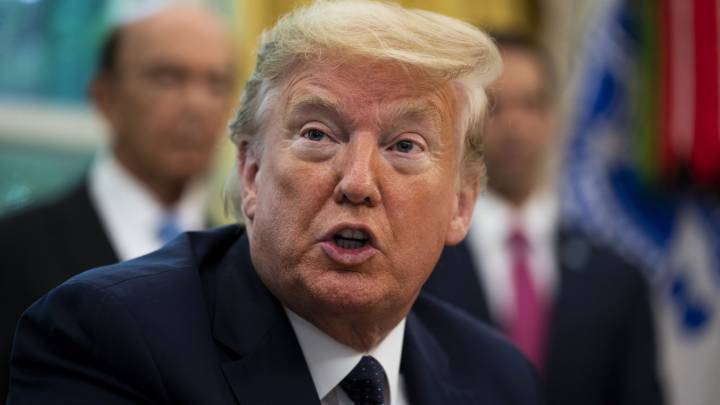 Once a grifter, always a grifter.  (pic via en.as.com)

House Republicans are reportedly already fighting about what their leadership would look like after Donald Trump takes them off a cliff.  Republicans have been hostile to the needs of 99% of the country for decades.  Regardless of who they put in charge of their caucus, these clowns deserve to be sent to Siberia for an extended timeout after the damage they've inflicted on this country.

Experts are increasingly calling for Massachusetts to rollback the re-opening of the economy as coronavirus cases continue to increase across the Commonwealth.  Massachusetts is one of the few states in the country to have the situation relatively under control, and it would be a major setback to lose that progress

Twitter is looking at a possible $250 million fine from the Federal Trade Commission for using phone numbers of users to target ads.  Is anyone surprised by this?  How much would you pay each month for a Twitter that was ad and troll-free?

The Boston Red Sox start a two-game series on the road against the Tampa Bay Rays tonight.  Nate Eovaldi takes the mound for Boston, so maybe they'll have a chance of winning the game.  However, the biggest priority for the team has to be getting in and out of Florida without anyone catching the coronavirus.

Speaking of which, this week's St. Louis Cardinals - Detroit Tigers series has been postponed because 13 members of the Cardinals organization have tested positive for the coronavirus.  The Cardinals hope to be be able to resume playing against the Chicago Cubs on Friday.  So what happens if we get to the end of the season, and some teams have played, say 10-15 games fewer than their opponents because of outbreaks?  What happens if a team is hit with an outbreak during the playoffs?  From health concerns to logistics, this experiment is doomed to fail.  Shut it all down now and prepare for 2021.

Dwayne "the Rock" Johnson is part of a group that just bought the XFL from Vince McMahon for $15 million.  Interesting.  We've said many times before that the project was a huge waste of McMahon's money, and two league bankruptcies prove our point.  (The coronavirus pandemic may have hastened the downfall of the second version of the XFL, but history shows it was eventually going to happen one way or another.)  One of Johnson's partners in the deal is his ex-wife/business associate Dany Garcia, so this makes her the first female co-owner of a professional sports league.  Garcia and Johnson have a proven track record of success, so we're curious to see if they can make this work.

We're sorry to hear that Reni Sentoni died on Saturday.  The character actor had a large number of roles over the years, but he's probably best known for playing Poppie on Seinfeld.  Sentoni was 81 years old.  Our condolences go out to his family and friends.

Little disappointed in Jim Beaver's non-apology after a racially offensive picture of the actor appeared online.  The photo allegedly showed Beaver making his eyes look slanted during a fan convention.  He initially issued a generic "sorry if I offended anyone" statement and then got defensive when it was pointed out that wasn't the same thing as apologizing.  The actor then issued a second statement which wasn't much better than the first.  He's usually been good on social issues, so this failure to address his behavior in a meaningful way is disappointing to see.

Okay kids, that's going to do it for now.  Here's Billy Idol to close things out with an extended live version of his cover of the classic Doors tune, "L.A. Woman," for today's, "Song of the Day."

Thanks for stopping by, everyone.  It was great to see you, as always.  BDH and Little Buddha remind you to stay off the roads if you're going to be in the path of the tropical storm today, and whatever your situation, keep your distance and wear your masks.  The guys want to see you back here again safe and in one piece.  Until next time, that's today's Clearing out the Clutter, and we are outta here.