Welcome back!  How are you?  Sorry it's so stuffy in here.  The fan should get some air flow going.  How's your weekend been so far?  Apart from the mugginess, things are fine on this end at the moment.  BDH and Little Buddha just finished their latest Elmore Leonard book, so I'm once again looking for something else for them to read.  Any suggestions?  I'm not sure what's on today's schedule, apart from the Red Sox - Yankees game tonight, but I guess we'll figure that out later.  For now, let's take a peek at the news.  The guys made a fresh pot of coffee, so grab yourself a nice medium DD, because it's time to clear out some Sunday Clutter.

(Oh, before I forget, we'll most likely be back again on Tuesday!)

New CDC projections indicate that over 20,000 Americans could die from the coronavirus in just the next three weeks.  Is there any number which would be large enough to convince the people who are willing to risk dying by not wearing a mask to get a Big Mac to change their behavior, or is the selfishness just too deeply ingrained?  If a million people died by the end of the year, would that have any impact on this group of fools, or would they just say, "Hey, we all gotta go sometime?"  The selfishness, arrogance, and ignorance are both infuriating and depressing.

Of course, that doesn't excuse the "leaders" who are willing to sacrifice everyone to protect the financial interests of the top 1%.  We know they don't care how many people die, as long as there are profit margins to protect and expand.  Experts say we could have this entire thing under control if people just hunkered down and wore their masks for 4-6 weeks.  All we'd have to do is pay people to stay home and we could halt this pandemic in its tracks.  Instead, we're at the mercy of morons and left banking on a change in power to turn the tide in 2021.  This is a national disaster on multiple levels.

The media will reprotedly be banned from this month's Republican National Convention in Florida because of coronavirus-related concerns.  That's unacceptable.  There's a national public interest in seeing the incumbent White House occupant's re-nomination, and the process should not be allowed to hide in the dark.  Also, if it's too dangerous for the media to cover this event, it's too dangerous for schools to re-open.

Donald Trump tweeted "Make America Great Again!" last night, thus admitting that he's completely failed to do the job. That's as close as Trump has come to acknowledging reality in the last 3 1/2 years.

Whether it's foreign affairs or domestic, voters are expecting Joe Biden to do the exact opposite of anything that Donald Trump has done.

Representative Karen Bass (D-California) is defending her comments in 2010 praising the Church of Scientology, while she tries to save her chances of being Joe Biden's VP pick.  She's trying to claim she was just applauding a new organization in her district, and that she didn't know all of the information that's come out about this group since then.  That's not going to fly.  Positive words for this organization are an automatic disqualifier for anyone who might be the #2 at the White House.

In case you're wondering if we will be trying out Coca-Cola's new coffee-infused soda if it is released anywhere near us next year - yes, yes we will be doing that.  However, since this product will apparently have about twice the caffeine of a normal soda, we expect to have one every three or four months so that it doesn't destroy our ability to sleep. 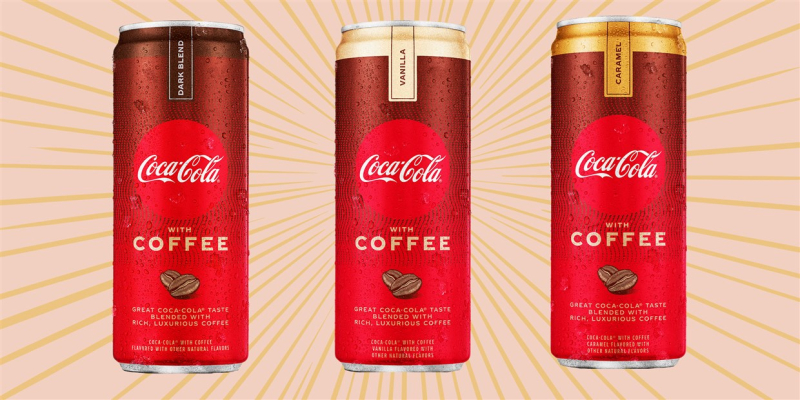 Which one would you choose?  (pic via today.com)

On the flip side, we will probably take a pass on the new Dunkin' coffee flavored cereals.  As much as Clutter is fueled by the DD mothership, we don't drink their caramel macchiato and mocha latte offerings, so the idea of eating them for breakfast isn't really appealing.  Our teeth hurt just looking at the boxes, and we can only imagine how many grams of sugar are in each serving.   Of course you're welcome to send us a review at info@clearingouttheclutter.com if you want to share your thoughts about these products.

Following up our conversation yesterday about Apple's inordinate success distorting the S&P 500 index:  Apple, Facebook, Microsoft, Amazon, and Google comprise just over 21% of the market cap-weighted index.  This year has been fantastic for big tech, and so their disproportionate presence explains why the index is doing well when the rest of economy is taking such a hit from the pandemic.  Or, you could see it as their success is hiding the true extent of the damage everywhere else.  Either way, the Clutter investment team is telling us to stay focused on the long-term.

The Boston Red Sox lost 5-2 to the New York Yankees last night and now fall to 3-6 on the year.  That puts them on track for about 20 wins this shortened season which feels optimistic at this point.  The Boston starting rotation had yet another rough outing, as newcomer Zack Godley gave up the five runs in the first two innings, thanks to a solo home run by Aaron Judge and a grand slam from Gio Urshela.  The Boston bullpen kept the Yankees quiet after that, but it was already too late at that point.   The Red Sox are now counting on a fellow named Austin Brice to try to keep them in the game for at least a few innings while they hope to avoid a sweep tonight.

Things continue to get worse for the Boston Red Sox with the announcement that ace pitcher Eduardo Rodriguez is done for the season due to heart inflammation associated with his contracting the coronavirus.  His long-term prognosis appears to be good, and the team says they expect he'll able to pitch in 2021, but this is a reminder of the seriousness of the current crisis.  Rodriguez was a healthy 27-year-old athlete before he was sick, and COVID-19 took him out of commission.  This is no joke, friends.  It's a reminder of the importance of wearing your masks and keeping your distance from others.  It's also yet another sign that the 2020 baseball season should be shut down, effective immediately.  How many players have to become sick before MLB acknowledges it made the wrong choice not to require a bubble?

Milwaukee Brewers outfielder Lorenzo Cain is checking out for the rest of the season because of coronavirus concerns.  His decision comes as his team's weekend series against the St. Louis Cardinals was postponed because multiple Cardinals players tested positive for the virus.  If baseball doesn't close itself down soon, will more players decide that this isn't worth the risk and follow Cain's lead?

Meanwhile, Detroit Lions quarterback Matthew Stafford was placed on the reserve/COVID-19 list yesterday.  It's unclear if that means he tested positive for the coronavirus or was around someone who tested positive.  It's also unknown how long he'll be out of action.  Eight members of the Lions have already been placed on this list.  As NFL teams begin group workouts, it seems likely we'll be hearing many more of these kinds of stories over the next few weeks since these guys aren't playing in a bubble either.  Pretending there's anyway this set-up will work is to be in denial about the current state of the country.

New England Patriots wide receiver Marqise Lee is opting-out of the upcoming season because of coronavirus concerns.  Lee said his decision was driven by protecting his young daughter who was born in February.  Good for him.  Lee becomes the 7th Patriots player to make this move, which is more than any other NFL team.  Is there a story behind that, or is it just a random fact?

Sorry to hear that actor Wilford Brimley died yesterday.  Brimley was best known for his roles in the films Cocoon and The Natural, as well as being the face of a Quaker Oats campaign and one for diabetes education, which he infamously pronounced as “diabeetus.” He was 85 years old.

We're curious to find out what Linkin Park has in store to celebrate the 20th anniversary of the release of their debut album this coming October.  It's hard to believe it's already been three years since former singer Chester Bennington died from suicide.

This new documentary about the Go-Go's sounds terrific.  Unfortunately, we don't get Showtime, but hopefully it will eventually show up on Netflix or Peacock at some point.

Okay kids, that's going to do it for now.  Let's have the Go-Go's close things out with a live version of, "Vacation," for today's, "Song of the Day."

Thanks for stopping by, everyone.  It was a treat to see you, as always.  Enjoy the rest of your weekend, wear your masks, and we'll catch up with you again soon.  Until next time, that's today's Clearing out the Clutter, and we are outta here.