Welcome back!  How are you?  Unfortunately, I struck out at the bookstore yesterday.  There just wasn't anything that seemed like a good fit for BDH and Little Buddha, so I'm going to comb through our shelves and see if I can find anything they might like.  The good news is that the free local weekly comes out later this morning, and that means the guys will have a new rock and roll crossword puzzle to focus on for a few hours today.  It also sounds like the weather should be a little more tolerable, which is nice, especially because I have to water the garden this afternoon/evening.  Anyway, that's the latest on this end.  Let's check out the headlines.  The guys made coffee, so grab yourself a nice medium DD, because it's time to clear out some Wednesday Clutter.

Donald Trump held another coronavirus briefing yesterday, but the real purpose of the event was for Trump to whine that Dr. Anthony Fauci's approval rating is higher than his:

Trump continued: "And (Fauci)'s got this high approval rating. So why don't I have a high approval rating with respect -- and the administration -- with respect to the virus? We should have it very high."
"So it sort of is curious," Trump said, "a man works for us, with us, very closely, Dr. Fauci and Dr. Birx also, very highly thought of -- and yet, they're highly thought of, but nobody likes me?"
"It can only be my personality, that's all," he said.

There are almost 4.5 million coronavirus cases in the United States, and we've just crossed the 150,000 deaths mark, as the pandemic continues to rage out of control.  This crisis because of Trump's incompetence/corruption, and his focus is on why no one likes him.  That's beyond pathetic.  His neediness knows no limits (as confirmed by Mary Trump's recent book), and it shows for the 1000th time why he's the worst possible person to have this job right now.  The United States needs a White House occupant who actually cares one iota about the country, rather than a guy who will forever obsess about why his dad didn't love him. 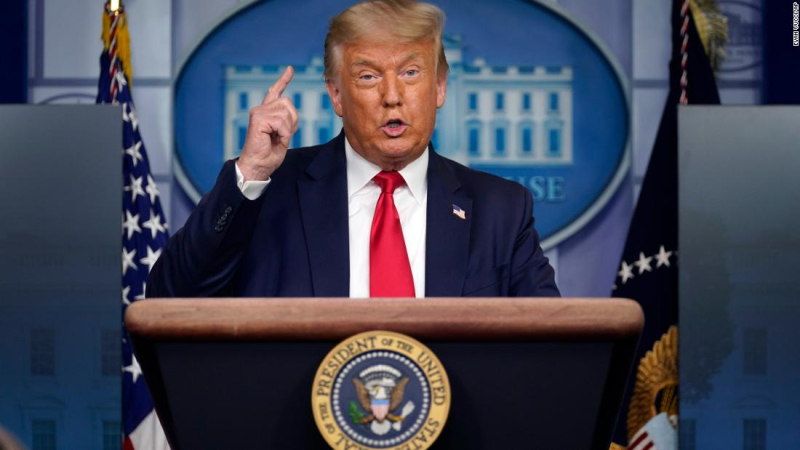 Donald Trump will forever be a sad little boy.  (pic via summarizer.co)

Donald Trump stormed out of his coronavirus briefing yesterday after being questioned about retweeting a video from a woman who believes in alien DNA and demon sperm.  That's not an Onion headline. That's a real description of the current White House occupant.  Anyone who supports this idiot should be forced to spend an extra six months in quarantine after this pandemic is finally brought under control.

In case anyone was wondering, Donald Trump admits he still hasn't said a word to Vladimir Putin about reports that Russia put bounties on U.S. soldiers in Afghanistan.  Trump can't afford to make his boss angry, so the supposed commander-in-chief will do nothing to protect the men and women who serve under him.  We'll never understand veterans and active members of the military who support Trump when he couldn't care less about them and sees them as a toy for his entertainment.

Attorney General William Barr's appearance before the House Judiciary Committee yesterday was a disaster for Democrats, as they failed to hold the corrupt Barr accountable for any of his actions.  The best thing that can be said for these people at times is that they're not Republicans.  The House should have impeached Barr months ago for acting as Donald Trump's personal attorney instead of the nation's top law enforcement officer, but instead they're clearly just trying to run out the clock at this point.

Joe Biden says he plans to choose his running mate next week, although it's not clear if he also expects to make the announcement then as well.  However, the Democratic National Convention begins on August 17th, so one way or the other, we don't have too much longer to wait.  We won't get into the speculation game, because the "experts" who do that are making it up like the best of them, but we hope Biden chooses a woman who will boost progressive excitement about his candidacy.  The fact that he's not Donald Trump is his biggest strength right now, but this country is changing rapidly, and Biden needs to select someone who can help him navigate that reality.

A new poll shows Senator Susan Collins (R-Maine) losing to challenger Sara Gideon by five percentage points (44% - 39%).  Collins being removed from office in November would only be topped by the defeats of Donald Trump and Mitch McConnell.  It would be at the same level as Lindsey Graham getting the boot.  Everyone who has covered for Trump over the last 3+ years should be punished for abandoning this country.

Speaking of Senator Collins, she's the target of the latest Lincoln Project ad, which blasts her for being a Trump "stooge."

This video of the NYPD kidnapping a Black Lives Matter protestor and throwing her into an unmarked van is disturbing and can not be tolerated.

Good for MacKenzie Scott, who announced that she's donated $1.7 billion to charity so far, as part of her pledge to give away the majority of her fortune.  Scott's priorities seem to be focused in racial injustice, as well as inequality.   Jeff Bezos's ex-wife still has over $60 billion, so her journey has only just begun.  Her ex-husband should follow her lead and discover the joy of  helping to improve the world.  Bezos is worth about $180 billion.  Imagine the problems he could cure while remaining obscenely wealthy.  Really, what should happen is that lawmakers should find the political courage to tax the uber-wealthy at a proper level.

While the United States continues to be overwhelmed by the first wave of the coronavirus pandemic, Europe may already be moving on to round two.  The big question is how how hard it will hit.  It seems like most of the countries understand what needs to be done to reduce the damage, so hopefully they won't be overwhelmed by this possible resurgence.  In any case, it looks like this will remain our current version of "normal" for the foreseeable future, at least until the creation of a vaccine.

Baseball is a mess.  MLB had to put the Miami Marlins and Philadelphia Phillies in quarantine because of a coronavirus outbreak on the Marlins.  The Marlins are out of action until next Monday, the Phillies are shut down until Friday, and their games that were supposed to happen over the next few days have to be rescheduled.  This is all a waste of time.  These players aren't in a bubble like the NBA, and even if their travel is reduced, it's still happening, including trips to hot spots like Florida, Georgia, and California, so you know this situation is likely to happen to other teams.  Shut it all down and figure out a better plan for 2021.

The Boston Red Sox lost 8-3 to the New York Mets last night to fall to 1-3 on the year.    It was the fourth straight game where the Sox pitching gave up at least 7 runs, which doesn't seem like a good thing.  We'll be 10% of the way through the season after tonight, and so far, Nate Eovaldi is the only pitcher on the staff with a win.  The good news is that he's pitching tonight, so hopefully he can help right the ship for at least one game, while the Sox continue to look for other arms to add to the rotation.

Meanwhile, it appears the Los Angeles Dodgers still hold a grudge against the Houston Astros after losing to them in the 2017 World Series.  Of course, it's been determined the Astros were stealing signs that year.  Dodgers reliever Joe Kelly touched off a tense standoff between the two teams after throwing behind Alex Bergman's head in last night's game.  No punches were thrown, but we wouldn't be shocked if something happens tonight.

More New England Patriots players are opting out of the upcoming season because of coronavirus-related concerns.  The new additions to the list include linebacker Dont'a Hightower, safety Patrick Chung, and running back Brandon Bolden.  Good for these guys for putting their health and their families first.  These guys earned their paychecks, and they don't have anything to prove to anyone.  It will be interesting if some of these opt-outs turn into retirement announcements next year.  We were amazed by some of the reactions from Patriots fans on Twitter, which included excitement that the Patriots would have more cap space, and that this must all be part of some master plan from Bill Belichick.

The former Deadspin writers and staff who quit last year after being told to stick to sports are coming back in September with a new website called Defector.  It's a subscription model, so we probably won't be paying for it right now, but we wish them the best of luck.

This is exciting - Clutter favorite David Tennant is returning with new podcasts, starting on August 11!  Tennant's first season of podcasts was delightful.  He seemed to do a terrific job of putting his guests at ease, and the conversations were always engaging.   We look forward to listening to the new episodes with the former Doctor Who star.

Universal Pictures and AMC Theatres struck a deal that allows Universal's new releases to go to video-on-demand services just 17 days after debuting on the big screen.  The previous standard was three months in the theaters before making the move to VOD.  That seems like a colossal shift in the power dynamics of the movie industry, which was likely exacerbated by the pandemic.  One imagines that other movie studios will follow suit.  Is it an overreach to say this may mark the beginning of the end for theaters?

Maybe A.P. Bio should be the next TV show we check out on Peacock, now that we're almost done with House again.  Has anyone here watched it?  Since we're It's Always Sunny in Philadelphia fans, this seems like it should be a good fit, right?

Okay kids, that's going to do it for now.  Let's close this out with a little attitude.  Here are Slash and Fergie with, "Beautiful Dangerous" for today's, "Song of the Day."

Weren't we all generally expecting Slash to die from a drug OD about 30 years ago?  Life is full of surprises, kids.

Thanks for stopping by, everyone.  It was great to see you, as always.  BDH and Little Buddha say of course you're welcome to come back later to help them with their new crossword puzzle.  (They also want to show off how much rock and roll trivia they know.)  Otherwise, enjoy the rest of your day, stay safe, and we'll catch up with you again soon.  Until next time, that's today's Clearing out the Clutter, and we are outta here.