Welcome back!  How are you?  I thought yesterday's forecast for rain was going to be yet another tease after we only got a few sprinkles in the morning.  However, it came down for real later in the evening, which made the garden happy to no end.  BDH and Little Buddha say there's supposed to be more this afternoon.  We'll take it if it comes.  The guys will continue reading their book while I take care of a few things around here.  In the meantime, let's take a peek at today's headlines.  There's a fresh pot of coffee on the table, so grab yourself a nice medium DD, because it's time to clear out some Thursday Clutter.

To any pundits who claimed Donald Trump's recent comments about the coronavirus pandemic somehow marked "a shift in tone," Trump is still arguing against testing, because he thinks it makes him "look bad."  We've now had over four million cases and 145,000 deaths in the United States, and Trump's only concern remains himself.  It's disgraceful, and this country both needs and deserves a leader who actually cares about our people. 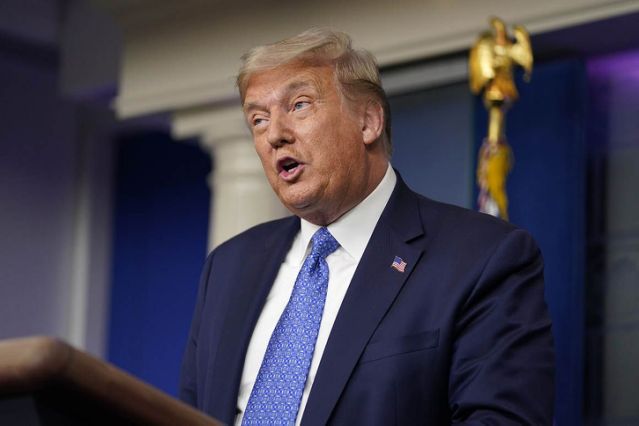 Donald Trump will always only care about Donald Trump.  (pic via news.yahoo.com)

Senate Republicans are expected to finally release the full details of their new coronavirus stimulus package today, some two months after House Democrats passed their version of a bill.  We'll have to wait for confirmation of specifics once the plan is made public, but it reportedly includes additional direct payments for individuals and families, another round of PPP loans, and funding for schools, as well as additional testing.  Let's hope it doesn't take too long for the two chambers to finalize a bill to send to the White House.  The American public needs assistance on all of these fronts.

The U.S. Ambassador to the United Kingdom reportedly said Donald Trump asked him in 2018 to push to host the British Open golf tournament at a Trump resort in Scotland.  Using the Oval Office for personal gain...that sounds familiar.  Ambassador Woody Johnson seems to have made the request, but it went nowhere.  A watchdog review of embassy dealings has also raised accusations that Johnson repeatedly made racist and sexist comments in the job.  That's going to be an issue for Johnson, who is also the co-owner of the New York Jets.  Players are leading the charge against racism in the NFL, and one has to wonder if Johnson will eventually have to make a break from the team.

A new book reportedly claims that the House Judiciary Committee originally drew up 10 articles of impeachment against Donald Trump last year before deciding to focus only on Ukraine.  Debating all 10 charges would likely have helped the public to better understand the wide-ranging corruption of this administration.  Of course, House Republicans would have done whatever they could to lie about the issues, and the Senate probably still would have acquitted Trump, since the fix was in from the start.  However, the historical record would have been more accurate if Democrats put everything on the table.

In case there's any confusion, when Donald Trump talks about acing his cognitive test, all he's saying is that he doesn't have dementia.  That's it.  That's how low he's trying to set the bar.  Also, given that we know he lies about everything, has anyone actually seen any proof that he passed the test?

Joe Biden says Donald Trump is the first racist White House occupant in our country's history.  That's insanely inaccurate, but at this point, it's also the least of our problems.  However, it does show that Biden will need people to help him with race relations issues if he takes over in January.

Senator Ron Johnson (R-Wisconsin) opposes making Juneteenth a federal holiday because he doesn't want to give federal workers another paid day off.  Johnson said he'd be willing to support the idea of making the end of slavery a holiday if workers trade it for an already-existing one.  In case anyone in the GOP actually really does wonder why their party is so white, this is a good example.

Hey, look at that - Wells Fargo is screwing over more of their customers.  Funny, that only seems to happen on days ending in the letter "y."

Walmart announced they'll be closed on Thanksgiving for the first time in 30 years, as a thank-you to their employees.  Hopefully this will eventually lead to the end of in-person "Black Friday" promotions.  It's never been our thing anyway, but those crowds do not socially distance themselves as they run around looking for Christmas deals.  Stick to online purchases and stay healthy.  It's a win-win.

Major League Baseball starts their "season" tonight when the Washington Nationals take on the New York Yankees.  We want to be excited about the return of baseball, but it's still a terrible call, as the country continues to be ravaged by the coronavirus pandemic.  These teams aren't isolated, they're traveling, and players are going to get sick, all so the billionaire owners can reduce their financial losses.  The whole thing is an exercise in greed, and our over/under for games played before the whole thing gets shut down still sits at 20.5.

It looks like Mookie Betts won't be testing free agency after all.  Betts is expected to sign a remarkable 12-year/$365 million contract extension with the Los Angeles Dodgers.  Add in the final year of his current deal, and this is 13 years at $392 million.  Good for Mookie.  He bet on himself, he got the years he wanted, and he's going to be paid like the generational talent that he's shown himself to be.  We still think the Boston Red Sox blew this one.  It was obvious that Betts is a special player and person, and they had five years to convince him to stay in Boston.

Thirteen years is obviously a gamble by the Dodgers.  However, barring injuries, the 27-year-old Betts is likely to make the contract worthwhile over at least the next 6-10 years, and between baseball's salary inflation and the team's immense resources, the Dodgers should be able to absorb any downturn in the final years without an issue.  The money says here Mookie ends up being remembered as a Dodgers legend.

The NFL announced that all fans will have to wear masks at games this year (assuming they're allowed in the stadiums in the first place.)  Good for the league for making it a mandate for everyone instead of leaving it up to the teams.  We imagine that a lot of the anti-mask crowd are football fans, so might this directive get them to rethink their opposition a bit, or will they just have a collective meltdown and threaten not to watch the games?  Yeah, we also think it's the latter.

Tom Brady is trying to act like he cares about player union solidarity now, but given that he's spent much of the off-season violating the rules against group workouts in light of the coronavirus pandemic, is anyone paying attention to him?

If you want to buy one of Eddie Van Halen's cars, here's your opportunity.  As much as we love the mighty VH, not sure why someone would choose that over one of his guitars, but we don't really get the whole car culture anyway.

Okay kids, that's going to do it for now.  Maybe it's the weather, but we could use a little more help getting moving today, so how about we close things out with Motorhead covering the AC/DC classic, "It's a Long Way to the Top (If You Wanna Rock 'N Roll)" for today's, "Song of the Day."