Welcome back!  How are you?  Something has come up, which means we probably won't be here tomorrow, so BDH and Little Buddha wanted to make sure they could say hello today.  How's your weekend going?  It's supposed to be a scorching 48 hours ahead, so we hope you're all somewhere cool and staying hydrated.  That translates  here to having the shades down, fan on, and drinking a gallon of water while we watch this afternoon's Red Sox game.  Sounds like a plan.  First, let's take a peek at the headlines.  The guys made coffee, so grab yourself a nice medium DD, because it's time to clear out some Sunday Clutter.

The United States had over 1,000 coronavirus-related deaths four days in a row last week, and 900 were reported on Saturday.   Experts say we could lose 200,000 people by November 1.   No amount of political rhetoric can hide the fact that we have to shut things down, friends.  There are too many people doing too many non-essential activities, and many of them are not socially distancing or wearing their masks.   Other countries have shown getting the virus under control is possible .  We can do this. 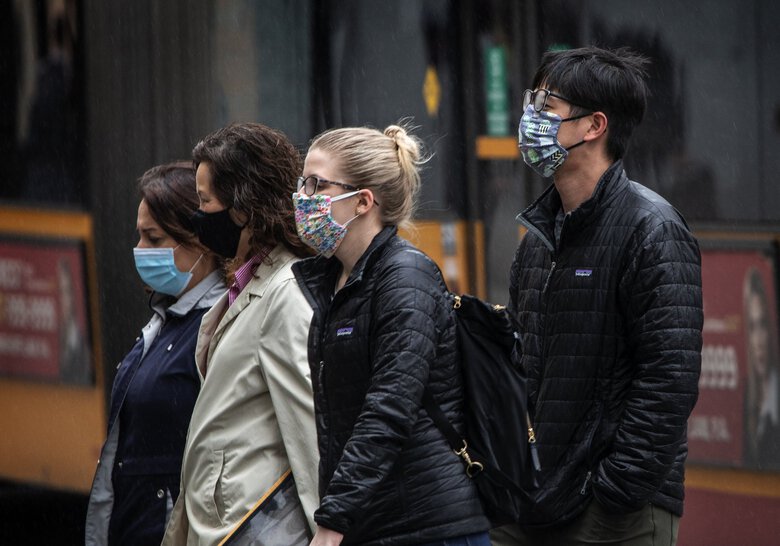 Close it down.  (pic via seattletimes.com)

Meanwhile, after a huge backlash, the Sinclair Broadcast Group yanked a TV segment featuring a conspiracy theory that claims Dr. Anthony Fauci is responsible for the creation of the coronavirus.  Sinclair says it will "rework" the piece as part of "providing an open and honest marketplace of ideas and viewpoints, even if incredibly controversial."  There's no public benefit to airing dangerous propaganda.  We ask everyone involved in the creation and promotion of this lie - how much did it cost to buy your soul?  The right-wing media conglomerate should have their licenses revoked for being a national public health threat.

Election Day is 100 days from today, and Joe Biden's campaign says they are ready to go for the final sprint.

Senate Republicans find themselves eager to debate their challengers.   It's a sign that they know they need to find every opportunity they can to try to distance themselves from Donald Trump, by any dishonest statements necessary.  The GOP protected this thug for years, and they deserve to go off the cliff with him in November.  Like Joe Biden doing his best to stay out of Trump's implosion, the Democratic candidates shouldn't do anything to help Trump's accomplices save themselves.

The Ronald Reagan Presidential Foundation and Institute asked the Trump campaign and the RNC to stop using Reagan's likeness in fundraising efforts.  Even Reagan supporters don't want to be connected to the MAGA cult at this point.

Representative Ted Yoho (R-Florida) is now straight-up denying that he called Rep. Alexandria Ocasio-Cortez (D-NY) "a fucking bitch," and he's complaining she's getting media attention for their interaction.  Yoho seems to have forgotten that a reporter witnessed his actions.  To the extent that the history books even remember Yoho, it won't be in a favorable light, but there will be generations who will applaud Representative Ocasio-Cortez's speech in response criticizing male privilege.

The Boston Red Sox had their first chance to see how "any starting pitcher not named Nate Eovaldi" would perform yesterday, and the answer was...not good.  Martin Perez was roughed up in his first Boston outing, as the Red Sox lost 7-2 to the Baltimore Orioles yesterday.  (So much for going undefeated this year.)   Perez gave up five runs (four earned) in the first two innings of the game, an effort which required 45 pitches.  The Sox offense was pretty quiet, apart from Mitch Moreland hitting the team's first home run of the year, although new Sox outfielder Alex Verugo went 3-4 in his first game with Boston.

Andrew Benintendi and Rafael Devers are both still looking for their first hits of the year, and not to over-hype things, but they don't have time to get off to slow starts.  We're already done with 3.33% of the year.  Ryan Weber takes the mound for Boston this afternoon, as the Sox try to take the series win.  Again, we don't want to get too far ahead of ourselves, but with the compressed time-frame this season, the Sox can't afford to waste games against terrible teams like Baltimore if they're going to be relevant  in 2020.

We may already have the best story of the 2020 baseball season.  Daniel Bard got the win when the Colorado Rockies beat the Texas Rangers 3-2 yesterday.  It was the first time Bard pitched in the big leagues since 2013, when his career was derailed by a major case of the yips.  Bard pitched 1 1/3 innings of relief, giving up two hits, with no runs and one strikeout.  You know he had to be thrilled.  Here's to hopefully many more performances like that for a man who has fought like crazy to get back to this point.

Major League Baseball has lost one of its great beards, now that Craig Kimbrel has gone clean-shaven.  The former Red Sox closer used to have one of the great forests of facial hair, but it is no more, and now Kimbrel looks like some random guy.  Let's have a moment of silence for the loss...

Safety Jamal Adams made it clear that he didn't want to be on the New York Jets anymore, and Adams finally forced the team to trade him to the Seattle Seahawks for three draft picks (including two first-rounders) and safety Bradley McDougal yesterday.  We know Adams is at the top of his position, but that seems like a lot for a safety, no?  Seattle also gets New York's 4th round pick in 2022, but it's still a heavy price.  Also, something tells us that as the New England Patriots adjust to the post-TB12 era, the Jets still won't be a serious divisional threat.

Yesterday was the 10th anniversary of the debut of the BBC-PBS version of Sherlock which starred Clutter favorite Benedict Cumberbatch and Martin Freeman.  Man, that went by quickly.  Both actors have seen their careers take off since that series began, so it doesn't sound like they'll be reuniting again anytime soon, but we'll still keep our fingers crossed for a one-off special or something like that in the next 10 years.

The first trailer for Season 19 of Family Guy is here.   That show's been around a sneaky long time.  We used to watch it faithfully on Sunday nights, but now it's more of a fallback if nothing is else in on TV.  In any case, have a look:

We're sorry to hear Regis Philbin died from natural causes yesterday.  He'll always be remembered as one of the great daytime talk show hosts.  Philbin was 88 years old.  Our condolences go out to his family and friends.

Okay kids, that's going to do it for now.  Of course, the pandemic has wiped out this year's music tours.  Let's take a trip in the way-back machine to a time when live music was still being played in front of large crowds.  Here's Pearl Jam at Fenway Park in 2016 to close things out with a terrific cover of the Who classic, "Baba O'Reily" for today's, "Song of the Day."

That video has a fantastic vibe, both from the band and the crowd.  Here's hoping that will return in 2021.

Thanks for stopping by, everyone.  It was great to see you, as always.  BDH and Little Buddha say of course you're welcome to come back later and watch the Red Sox with us.  However, we ate all of our snacks yesterday, so if you want to bring some chips or something, that would be wonderful.  Otherwise, enjoy the rest of your day, stay cool, and we'll catch up with you again soon.  Until next time, that's today's Clearing out the Clutter, and we are outta here.