Welcome back!  How are you?  Our crew is doing fine at the moment.  Even though they don't think the baseball season will last all 60 games, BDH and Little Buddha are happy to have the Red Sox back on TV, so we're going to watch them play the Baltimore Orioles this afternoon.  We could use a break from all of the House reruns, and even with the empty stands and fake crowd noise, watching baseball on TV provides a glimpse of what used to be considered "normalcy" around here, which is nice.  Plus, it also buys me more time to find the guys something new to read.  For now, let's check out today's headlines.  The coffee is ready, so grab yourself a nice medium DD, because it's time to clear out some Saturday Clutter.

Dr. Anthony Fauci said yesterday that he and his family have received serious threats that have required him to have security measures in place.  How many adults must have failed you as a child to make you such a broken human being that you would threaten a doctor for trying to help solve a national public health crisis?  Fauci also indicated that the hope is things will improve in 2021 after the development of a vaccine.  We'd add that the election of a White House occupant who actually wants to save American lives would also go a long way towards making things better. 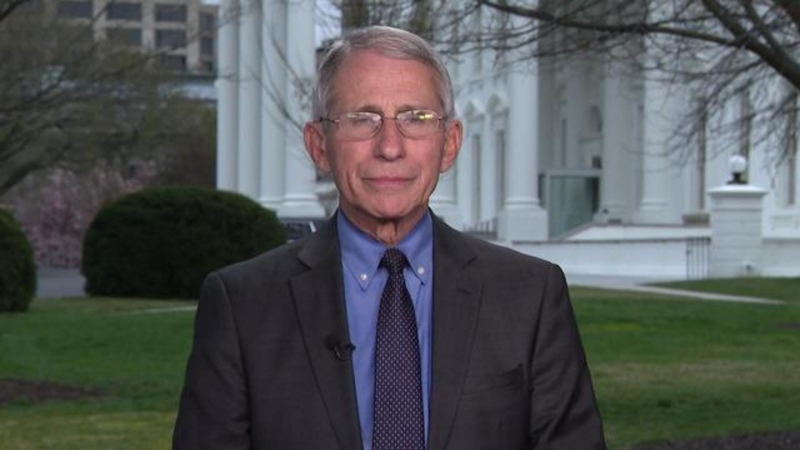 How about we don't threaten the public health expert who is actually trying to stop a pandemic?  (pic via cbsnews.com)

The Lincoln Project has a new ad out asking about Donald Trump's relationship with Jeffrey Epstein's accomplice Ghislane Maxwell.  Why did Trump send best wishes to the alleged head of a child sex trafficking ring?  In a better timeline, Trump's Espstein/Maxwell connection would have disqualified him from even entering the 2016 Republican presidential primary, but that would have required the GOP to have a soul:

The suburbs are running away from Donald Trump and Republicans as fast as they can.  This is why Trump is so intent on stealing the election - he knows he's going to be crushed if people are allowed to vote freely.

It will be fitting and just if Donald Trump's opposition to the Black Lives Matter movement is what eventually buries him.  The man's lifetime of racism is well-documented, and it would be appropriate if this is the first time he finally faces repercussions for it.  It's also a hopeful sign for the country that the protests seem to have made such a dramatic and immediate impact.

Massachusetts Governor Charlie Baker announced strict new travel rules yesterday that require people coming to the state to quarantine for 14 days (unless they come from a "low-risk" state) or face a $500 daily fine.  The rules take effect on August 1.  The current "low-risk" states are New York, New Jersey, Connecticut, Maine, Rhode Island, Vermont, New Hampshire, and Hawaii.  The list reflects the fact that the Northeast (and Hawaii) are the only parts of the country that currently have their coronavirus cases relatively under control, and Baker recognizes a growing threat as the pandemic continues to worsen.  Enforcement remains a bit of a question, though.

Good for McDonald's for implementing a new policy requiring customers to wear masks inside their restaurants, as of August 1. For those who say they'll stop going now, that's also a good move for their health, so really, it's a win-win.

Well, the Boston Red Sox pitching rotation starts the 60-game "season" with Nate Eovaldi and "a bunch of guys," and as of right now, that's fine.  The Red Sox crushed the Baltimore Orioles 13-2 in their opener last night.  Eovaldi looked sharp in his first outing of the year, giving up one run and five hits over six innings.  The Sox offense teed off on the lowly Baltimore pitching, scoring the 13 runs on 17 hits.  It was weird to not see anyone in the stands.  The fake crowd noise made it all feel like a video game at first, but we adjusted to it after about an inning.  In the end, it's nice to say the 2020 Red Sox were undefeated for at least a day.  Our prediction is that they end up winning the World Series, because what the hell, why not?  Martin Perez makes his debut for the Sox against Baltimore this afternoon.

The NFLPA approved an agreement yesterday that will allow training camps to open on time next week. The agreement includes various protocols for camp, as well as dealing with issues regarding salaries, benefits, and other issues in case the season is cancelled.  Players will apparently have a week to decide whether or not to opt-out this season.  These guys are probably more at-risk than any other professional athletes, and we expect them to have a lower opt-out rate than any other league because most of them lack economic security.

However, there will be some players who make the tough call.  The first one is Kansas City Chiefs right guard Laurent Duvernay-Tardif, who announced he won't be playing this year because of coronavirus concerns.  Duvernay-Tardif is a medical school graduate who has been working in a long-term care facility in the off-season, so he's had the opportunity to see the damage the coronavirus can cause up close and personal.  Given his experience, will his decision influence any other players?  In any case, cheers to Duvernay-Tardif for making this difficult move and also for having a solid post-playing career already lined up, because that puts him ahead of most players.

Washington's football team announced that for the time being, they will be known as...Washington's Football Team.  That's probably the best one could have hoped for at the moment, between a guy trademarking other options and owner Daniel Snyder being...Daniel Snyder.  No word yet on when to expect a permanent name change.

Maria Bello will reportedly be leaving NCIS after eight episodes into the new season.  Now we just have to find out when said season will even be able to begin filming.  Bello's contract is expiring, and she's apparently not interested in sticking around, which isn't surprising.  After reading all of the stories that have come out over the last few years, the NCIS set doesn't sound like a fun place to work.

Former Mad Men star John Slattery will appear in a new series this fall about a tech giant fighting an AI that's gone rogue.  Sounds like a perfect story for today's world.  NEXT premieres on Fox on October 6.  Here's the first trailer:

Okay kids, that's going to do it for now.  Let's close things out with a new tune from the Chicks.  Here's, "Sleep at Night" for today's, "Song of the Day."

Thanks for stopping by, everyone.  It's always great to see you.  BDH and Little Buddha say you're welcome to come back later to watch the Sox game with them if you like.  We never picked up a media guide, because our spring training trip was cancelled, so the guys may need to look up a few names, especially for the relievers, but in any case, they always love hanging out with you. (Also, if you could bring some snacks, that would be terrific.)   Otherwise, be good, stay safe, and we'll catch up with you again soon.  Until next time, that's today's Clearing out the Clutter, and we are outta here.