Welcome back!  How are you?  Yesterday was a nice rebound from Wednesday here.  I fixed most of the things that went wrong 24 hours earlier, and I also found another Elmore Leonard book for BDH and Little Buddha, so that was good.  Speaking of our dynamic duo, I was just talking to them about how screwy my sense of time is now.  I can't believe it's already July 31, because the last few weeks have generally gone by quickly, but on the other hand, the 4th seems like it was three months ago.  Does that make any sense?

The guys think that means I'm having a great time in the garden (and hanging out with them, of course), but at the same time, 2020 has a ridiculous "Groundhog Day" vibe to it.  I tell you, folks, these two are as smart as they are handsome.  Of course, they also make great coffee.  There's a fresh pot on the counter, so grab yourself a nice medium DD, because it's time to clear out some Friday Clutter.

Donald Trump tweeted a call  to delay this year's election yesterday, citing his supposed concerns about fraud and mail-in voting.  Someone smells  humiliation coming in November.  Trump doesn't have the power to change the date.  That's under the control of Congress, as specifically spelled out in the U.S. Constitution.   We didn't see any House or Senate Republicans defending the suggestion, and Speaker Pelosi certainly won't go along with it.  However, there's nothing Trump won't do to try to cast doubt over the legitimacy of the results.  The restoration of our country begins the day he is finally removed from the White House. 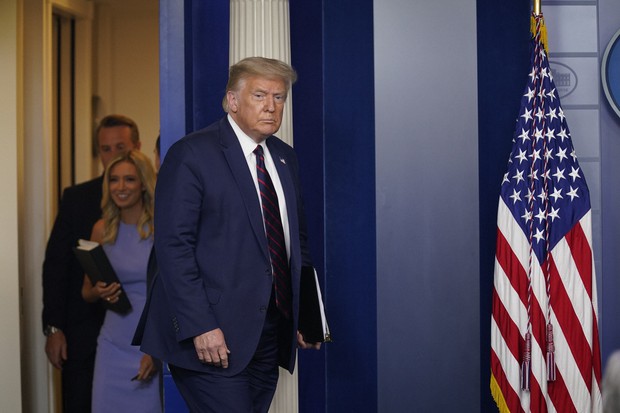 Even the co-founder of the conservative Federalist Society said Trump's tweet calling for the election to be postponed is grounds for immediate impeachment and removal from office.

A new poll shows almost 66% of the country disapproves of the way Donald Trump has handled the coronavirus pandemic, racial unrest, and relations with Russia, so yeah, you can see why he'd rather not have anyone vote.  Since Trump is so eager to change the date of the election, we'd be fine with making it next Tuesday.

Doctor Anthony Fauci is scheduled to testify before Congress today, as news comes that over 67,000 new coronavirus cases were diagnosed yesterday.  (The best that can be said about that is that it's less than the record 77,000 that were diagnosed on July 16.)   How many tweets do you think Donald Trump will send about this before the day is over?

We're sorry to hear that Herman Cain died from the coronavirus yesterday after being hospitalized from it for almost a month.  Cain, who spoke out against wearing masks, tested positive 11 days after attending Donald Trump's rally in Tulsa, Oklahoma, where people were packed together without masks for better visuals.  We can't help but wonder how his family feels about him signing the waiver (that all attendees were required to sign) promising not to sue Trump if he became ill.  May his legacy be a reminder that this pandemic is no joke, and that people should be taking the necessary steps to keep themselves safe.  Herman Cain was 74 years old.

The judge in Ghislaine Maxwell's case ordered the unsealing of a number of documents yesterday, and that must make a number of powerful men uncomfortable.

It is outrageous, but unfortunately not surprising, that the former police officer who shot and killed Michael Brown in 2014 will not be charged with any crime.  Prosecutors say they are not exonerating Darren Wilson, but that they do not believe they have a strong enough case to prove that he committed murder or manslaughter under Missouri law.  It's an excuse that's repeated throughout the country on a regular basis when it comes to police-related shootings.   This country gives them the power to kill with close to zero concerns about consequences.  It's a recipe for tragedy.

The Dunkin' mothership announced that it plans to close approximately 800 stores in the United States.   That's about 8% of all DD stores in the country, which has to be seen as another red flag about the economic impact of the coronavirus pandemic.  We're not panicking, though.  The stores are described as "low-volume sales locations," which we can't imagine covers any of the stores around us, and half of them are located in gas stations, so we're pretty sure we're in the clear.

Running back LeSean McCoy signed a one-year deal with the Tampa Bay Buccaneers yesterday, which must please Tom Brady to no end.   We're not at all convinced that the NFL season will take place, but if it does, we admit we'll watch Brady, Gronk, and the rest of the Bucs crew.

Speaking of the NFL season not happening - the Buffalo Bills sent their rookies home yesterday after five players tested positive for the coronavirus.  Yeah, this makes even less sense than baseball being played.

Hey, look at that, the Boston Red Sox beat the New York Mets 4-2 last night for their second straight win.  The offense was led by catcher Christian Vazquez, who went 2-4 with two home home runs and three RBI.  Meanwhile, pitcher Martín Pérez had a much better second outing with his new team, giving up just two runs and two hits over 5 2/3 innings for the win.  The Sox now move over to the Bronx, where Ryan Weber will take the mound against the New York Yankees tonight.

Chicago Cubs star Anthony Rizzo complained about the lack of MLB safety protocols for rain delays after last night's Cubs - Cincinnati Reds game was postponed due to weather.  Rizzo wanted to know why players were allowed to hang out together in the clubhouse, with no social distancing taking place.  It's a valid question that deserves to be addressed in a timely fashion.

Two members of the Philadelphia Phillies staff tested positive for the coronavirus yesterday, so the team's weekend series against the Toronto Blue Jays has been postponed.  The Miami Marlins have already been sidelined until next week as they deal with a  major outbreak, and the wheels continue to fall off this "season."  Shut.  It.  All.  Down.

Ellen DeGeneres sent a letter to her crew apologizing for a toxic workplace environment and promised there would be changes.  It sounds like that means the removal of people like executive producer Ed Gavin, who is at the center of multiple accusations, which makes sense.  However, we've also heard multiple alleged stories about the star herself during this situation, so it will be interesting to see how much is different in say, six months.

Wait, there's a new Muppets show on Disney+?  Do we have to rethink our decision not to subscribe to the service?  Hanging out with Kermit and company founds fantastic.  Hmm, wonder if any of these clips might eventually make their way to YouTube...we'll definitely have to think about this some more.

Drew Barrymore has a new talk show coming on September 14, and apparently her first guest was...7-year-old Drew Barrymore.  Fun fact - we were once bounced from our table at a Hollywood restaurant because the group who had the reservation after us had just arrived.  As we were making our way out, we caught a glimpse of the group replacing us, and Drew Barrymore was in that crew.

Okay kids, that's going to do it for now.  Let's close things out with the latest frack from Beyoncé's new Black is King visual album (which will be streamed later today.)  Here she is (along with Shatta Wale and Major Lazer) with, "Already," for today's, "Song of the Day."

Thanks for stopping by, everyone.  It was great to see you, as always.  BDH and Little Buddha invite you to come back later to read or watch the Red Sox game with them if you like.  Otherwise, be good, stay safe, and we'll catch up with you again soon.  Until next time, that's today's Clearing out the Clutter, and we are outta here.