Welcome back, and a happy Friday to you all!   This week went by disturbingly quickly.  Any big plans for the weekend?  I think we're done with the rain for a couple of days.  BDH and Little Buddha just finished reading their latest book, so I need to find another activity for them.  Oh, the Red Sox are playing tonight.  The guys love baseball, so that will be fun.  In any case, these two are so happy you're here, they just made you a fresh pot of coffee.  Grab yourself a nice medium DD, because it's time to clear out some Clutter.

There are now over four million coronavirus cases in the United States.   That is especially stunning, because we just crossed the three million mark about two weeks ago.  Of course, that's the confirmed number, which means the real tally is likely much higher.  Friends, we are losing this fight, and the defeat is gaining speed.  No one wants to talk about it, but we're going to have to shut down the country again and start over if we're going to have any actual chance of turning back the tide.  Maybe that will be easier to consider when it gets colder outside, but it's obvious the status quo is failing.

Donald Trump cancelled the part of this year's Republican National Convention that was supposed to take place in Jacksonville, Florida, because of safety concerns due to the skyrocketing coronavirus numbers in the state.  To review, it's not safe for Trump and the GOP to gather, but they want the schools to be open.  Scrapping the event is the right move, but it's also a major embarrassment for Governor Ron DeSantis who rushed his state's reopening in order to earn favor with Trump.  DeSantis must know his poll numbers have fallen dramatically because of this debacle.  Does he have the backbone to stand up to his hero now, or will he continue to grovel?  The former brings the possibility of hope to his constituents, while the latter sends them further into danger.

The Lincoln Project released another devastating ad illustrating Donald Trump's repeated lies over the course of the pandemic.  This is one to share with friends and even any MAGA cult members you know to force them to at least think for 2 1/2 minutes about Trump's complete failure that has cost so many lives:

Donald Trump can't stop talking about his performance on a cognitive test, and now he's rambling about getting "extra points."   That leads us to once again ask the question - do we have any independent confirmation that he even passed the exam?  We'd love to see what data Trump is being given that tells him his attacks on Joe Biden's intellect are working for him, because from here, it's raised far more questions about Trump's own health than anything else.

A federal judge agreed that former Trump fixer Michael Cohen was sent back to prison in retaliation for speaking about his upcoming book, and he ordered Cohen returned to home confinement for the remainder of his sentence.  There's no release date for Cohen's book, but it's apparently expected to be ready before the election.

Representative Alexandria Ocasio-Cortez dismantled Rep. Ted Yoho's non-apology after allegedly calling her a "fucking bitch" earlier in the week.  Rep. Yoho would not apologize for his choice of words.  He tried to hide behind his "passion" and that he is married and has daughters, so really, he couldn't be that bad.  Representative Ocasio-Cortez was having none of it, and her speech shredding the privilege of Yoho and men like him is one that should be taught in schools:

“This is not new, and that is the problem. Mr. Yoho was not alone. He was walking shoulder to shoulder with Representative Roger Williams. And that’s when we start to see that this issue is not about one incident. It is cultural. It is a culture of lack of impunity. Of accepting violence and violent language against women. And an entire structure of power that supports that...

I am someone’s daughter too. My father, thankfully, is not alive to see how Mr. Yoho treated his daughter. My mother got to see Mr. Yoho’s disrespect on the floor of this House towards me on television. And I am here because I have to show my parents that I am their daughter. And they did not raise me to accept abuse from men." 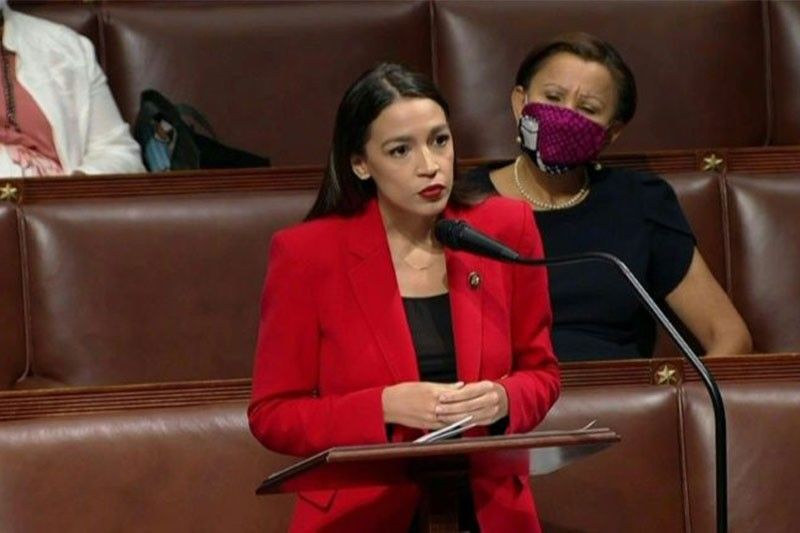 Would you pay to use Twitter?  CEO Jack Dorsey says the social media platform is considering a subscription model in light of a substantial decrease in advertising revenue.  Dorsey didn't give any specifics about how that might work, so we'd have to wait for that before deciding if it would be a good use of money.

Doctor Anthony Fauci threw out the first pitch before last night's MLB season opener between the Washington Nationals and the New York Yankees.  What can be said about the throw?  Fauci tried to flatten the curve?  The pitch wanted to socially distance itself from everyone else?  Fauci doesn't want anyone to catch anything?  As far as being a pitcher goes, Fauci is an expert at infectious diseases, and we're good with that:

The Boston Red Sox begin their 2020 "season" against the Baltimore Orioles at Fenway Park tonight.  Nathan Eovaldi takes the mound for the Sox.  The pressure on Eovaldi to stay healthy this year will be immense, since apart from him and Eduardo Rodriguez (who is currently out of commission), the Sox have no starting pitching.  That also means the team's chances of success likely depend on the offense slugging their way to a number of 10-9 wins.

This is concerning:  The Boston Red Sox are shutting down ace Eduardo Rodriguez for at least a week, after the lefty suffered "minor complications" in his return from dealing with the coronavirus.

Mike Tyson is returning to the boxing ring for the first time 1n 15 years for an exhibition fight against Roy Jones Jr. on September 12.  Hopefully this is a one-time deal, because no one needs to see the 54-year-old Tyson attempt a full-time comeback.

Bill & Ted Face the Music is switching from a theater release to video on demand on September 1 because of the ongoing pandemic.  That may well be the first new movie we need to check out at home, because some silliness sounds terrific these days.  There's also a new trailer for fans to enjoy:

Meanwhile:  A Quiet Place II and Top Gun: Maverick are both moving to 2021 release dates.  Hopefully it will be safe to see them in the theaters by April and July (respectively).

On a related note:  AMC Theatres is once again pushing back its planned reopening, given the current unsafe conditions.  The plan was originally for it to begin in mid-July, when then became July 30, which is now mid-to-late August.  We wouldn't bet on that lasting either, given the current ineptness, dishonesty, and corruption in the White House.

Port Charles fans rejoice - General Hospital is returning with new episodes on August 3. We don't even remember where the storylines left off when everything shut down in March, but we're more than curious to see how these shows will all come together under the current conditions.

The second season of The Boys hasn't even started yet, and the show has already been renewed for #3.

Taylor Swift released a surprise new album last night, which we're sure made millions of fans happy.  Swift said, "Before this year I probably would've overthought when to release this music at the 'perfect' time, but the times we're living in keep reminding me that nothing is guaranteed."

Okay kids, that's going to do it for now.  Let's wrap things up by checking out a track off Taylor Swift's new album.  Here's "cardigan" for today's, "Song of the Day."