Welcome back!  How are you?  We're all just plugging away here.  BDH and Little Buddha finished one of their books, and then they wrote their review yesterday, so that kept them busy while I did laundry and shoveled some of the snow.  I actually left a lot of the snow on the driveway, because I figured it would help dilute some of remaining salt as it melted.  A few of the plants are coming back into view as the snow recedes, which is terrific.  Gardening season looks like it will be an even bigger focus than usual this year if we're not allowed to go anywhere else for a while.  Anyway, let's check out today's headlines.  BDH and Little Buddha say the coffee is ready, so grab yourself a nice medium DD, because it's time to clear out some Wednesday Clutter.

The Senate and White House reportedly reached an agreement on a $2 trillion stimulus package to battle the economic damage from the coronavirus pandemic.  The final details have not been announced, but the bill apparently includes, "$250 billion set aside for direct payments to individuals and families, $350 billion in small business loans, $250 billion in unemployment insurance benefits and $500 billion in loans for distressed companies."  It also reportedly blocks Donald Trump and his family from receiving stimulus funds from the Treasury Department.  The devil is in the details, but we're glad to see the parties have settled on something, because Americans desperately need help right now.  This bill is expected to be voted on later today.

Let's be clear, the stimulus package is great news, but Donald Trump's push to end social distancing by Easter remains a dangerous and foolish idea.  Public health experts (who actually know what they're talking about) say that's too soon to end the practice.  It should be obvious, but an economy where millions are dying is a disaster.  We know the Great Pumpkin is only obsessed with making a buck, but we're more focused on not having our nation's health care system collapse because of all of the new cases caused by people being in close proximity to each other again.  Everyone should ignore this sociopath and stay home until this crisis is under control. 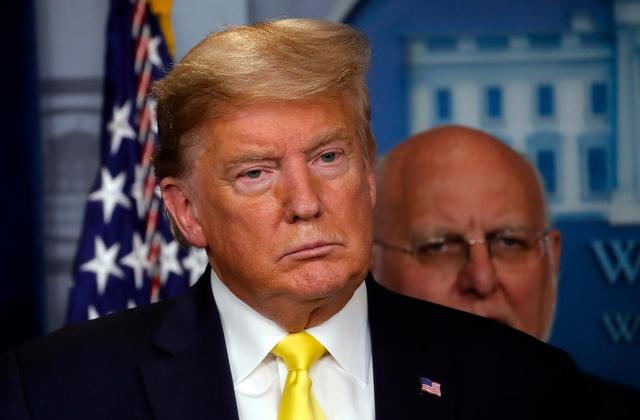 Out of touch with reality.  (pic via usnews.com)

Donald Trump made it clear during a propaganda event on Fox News that governors must kiss his feet if they want help from him.  He did it to Ukraine, and now he's doing it to the United States, just like Democrats warned during the impeachment process.  The sad man with the inferiority complex a mile deep will do anything to have his ego stroked.

Sorry to hear that Prince Charles tested positive for the coronavirus.  We wish him a full and speedy recovery.

It's good to hear that Senator Mitt Romney tested negative for the coronavirus after being potentially exposed to it because of his colleague Senator Rand Paul's recent reckless behavior.

Senator Richard Burr is being sued because he sold stock in Windham Hotels in February allegedly based on insider information he received from a confidential briefing about the coronavirus.  Much like Donald Trump, Senator Burr is clearly more focused on profits than the public.  Burr should already be out of office and in prison for his criminal activity.

Joe Biden finally made a television appearance yesterday to talk about the current pandemic.  It was good to finally see the presumptive Democratic presidential nominee after such a long silence.

Workers at eight different Amazon warehouses have tested positive for the coronavirus.  It sounds like only some of the facilities are being temporarily closed for cleaning, which raises further concern about whether or not the e-commerce giant is doing enough to protect its employees.

Social distancing is hard on the spirit, so BDH and Little Buddha found another article with tips about how to protect your mental health during such a stressful time.  They also want you to know they'll do whatever they can to keep you smiling.

As expected, the Carolina Panthers released quarterback Cam Newton yesterday.  The writing was on the wall after the team recently agreed to give quarterback Teddy Bridgewater to a three-year/$63 million deal.  The 2015 NFL MVP missed 14 games last year because of a foot injury that required surgery, so he'll need to show teams that he's healthy.  Of course, the problem is that it may be a while before he can do that, because of the pandemic.  Newton seems motivated to show that he's not done after nine years in the league, so we wish him the best of luck.  We also hope the New England Patriots aren't considering signing him.  Nothing personal against Newton, but since the Pats are now in a transition phase, they should lean into it hard.  Give Jarrett Stidham the starting job and leave him to sink or swim without worrying about having a former All-Pro behind him.

Another New England Patriot has left the building.  The Seattle Seahawks agreed to a one-year deal with wide receiver Phillip Dorsett yesterday.  Dorsett never really clicked in New England, but maybe he'll get on the same page with Seattle quarterback Russell Wilson.

Sorry to hear that New York Mets pitcher Noah Syndergaard needs Tommy John surgery.  As is the case with Red Sox ace Chris Sale, it's unclear when Syndergaard will be able to have the elective surgery right now, so we're probably looking at him being able to return in the second half of 2021 at the earliest.

This year's Olympics have finally been formally pushed back to 2021, because of fears about the coronavirus.  There's no way such a large international event could go on in July, given the current environment.  Are there any sports left at the moment?

YouTube will reduce their default video quality for the next 30 days in a bid to reduce the strain on the Internet caused by everyone being housebound at the present time.  It sounds like you can manually switch the setting back to HD, but maybe take a pass on that if you can help it.  The last thing we all need right now is for a global Internet crash.

Yesterday marked the 15th anniversary of the debut of The Office.  Show creator Greg Daniels recently offered some interesting thoughts about a number of items, including original casting thoughts and how the producers tweaked the show after the first episode.  We've been doing some binge-watching of the show on Comedy Central, and you can see how much it evolved from those early days.

Britney Spears has apparently become a socialist, which is not something we expected to write.  The singer's latest Instagram post calls for everyone to look after each other, as well as "re-distribute wealth and strike."  She posted someone else's quote, but hey, we're all for shaking things up around here, and if that's where Spears is heading, tell us more.

Lady Gaga is postponing the release of her new album, because of the current pandemic.  Chromatica was supposed to come out on April 10, but no new date was announced.  Seems like this would be a good time to release it, since all of her fans could use something to listen to while they're stuck at home, but apparently not.

Okay kids, that's going to do it for now.  BDH and Little Buddha decided they want to have a dance party, so let's have the Bee Gees kick it off with, "Stayin' Alive," for today's, "Song of the Day."

That's how we get this party started!

Thanks for stopping by, everyone.  We always appreciate the chance to check in with you.  Take care of yourselves, stay away from others, and we'll catch up with you again soon.  Until next time, that's today's Clearing out the Clutter, and we are outta here.