Welcome back!  How are you?  We're all doing fine at the moment, although I'm in denial about the new snow outside.  It's not really all "that" bad, but it just seems like overkill given everything else going on these days.  I'll probably deal with that this afternoon for today's exercise.  There are a couple of other small items on today's to-do list to take care of around here, so hopefully that will distract me for a bit.  BDH and Little Buddha think I should focus on the important things, like the fact that they made coffee.  They've got a point.  There's a fresh pot on the counter, so grab yourself a nice medium DD, because it's time to clear out some Tuesday Clutter.

Let there be no doubt:  If Donald Trump has to choose between saving Americans and saving his businesses, he's going to pick his businesses.  Trump is already pushing back against the social distancing recommendation, because it's hurting his bottom line, and nothing/no one is more important to him than his wallet.  If coming back too soon overwhelms the health care system and leads to the death of thousands (if not potentially millions) of Americans, but Trump can make a buck, he's fine with that.  Understand it, MAGA crowd - Trump is willing to kill you to protect his profits.  The man is a public health threat who should be removed from office immediately. 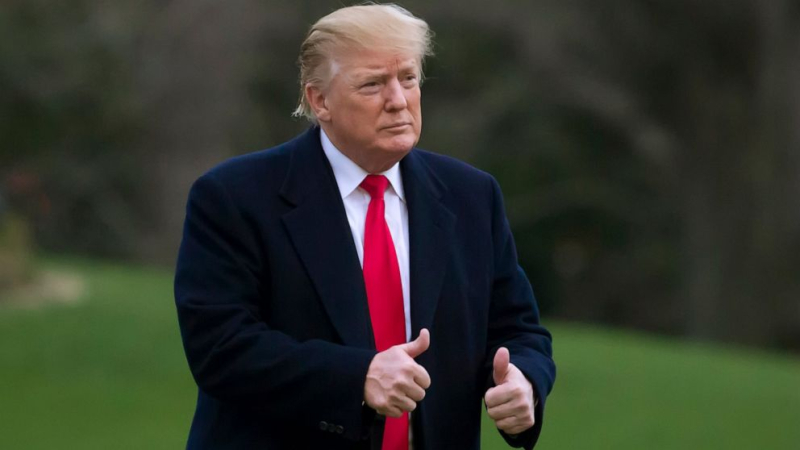 Profits over people every time.  (pic via abcnews.go.com)

Donald Trump tweeted some empty comments yesterday about everyone needing to be respectful of Asian-Americans.  Of course, they should be doing that, but we wouldn't need to have this conversation in the first place if Trump and his cronies hadn't been referring to the coronavirus as the "Chinese virus" for weeks.  You know he'll go right back to doing it in the blink of an eye.  The Trump brand runs on racism.

Texas Lieutenant Governor Dan Patrick seems to be ready to die for the economy.  The rest of us should follow the advice of public health experts.

The country is still waiting to hear from Joe Biden.  Apparently the likely Democratic presidential nominee will start making some noise this week.  However, it's inexcusable that he's been on the sidelines for so long, instead of visibly pushing back against Donald Trump's dishonest and dangerous propaganda about this crisis.

Massachusetts Governor Charlie Baker ordered all non-essential businesses to close by Noon today, and to remain closed until at least April 7, in response to the coronavirus pandemic.  There are exceptions like grocery stores, pharmacies, medical facilities, and gas stations.  Restaurants are still allowed to be open, as long as it's only for take-out or delivery.  Travel is not being restricted, but Governor Baker urges people to limit their trips to critical ones.  People are still allowed to be outside, but should keep their distance from each other.

Florida Governor Ron DeSantis is facing widespread criticism for his passive handling of the coronavirus crisis.  We all saw the various clips of the packed beaches and kids enjoying spring break like nothing was wrong.  That was enabled by a governor who was slow to take action and waited for businesses to step up before he responded to the crisis.

The Senate failed for the second time to advance a coronavirus stimulus bill yesterday, because Republicans are still prioritizing corporate bailouts and slush funds over helping families and health care professionals who are extremely vulnerable at the moment.

Senator Rand Paul is trying to defend his reckless actions which put those around him at risk while he waited for the results of his coronavirus test.  It's really simple - if you've been tested, you know you should be staying away from other people while you wait for your results.  Isn't Senator Paul supposed to be big on individual responsibility?  What a shock to find out he doesn't think that applies to him.

The Federal Reserve announced a number of new measures yesterday to try to diminish the economic harm caused by the pandemic.  We'll see if any of this slows down the negative sentiment on Wall Street, and what can the Fed do to help Main Street?

Amazon Prime members are now looking at shipping delays for non-essential items of as long as a month.  The question then becomes, what does Amazon consider "essential?"

Cheers to Colorado for becoming the 22nd state to abolish the death penalty.  Capital punishment is an inherently and irreparably flawed policy.  It has nothing to do with justice, and it should be universally rejected.  Support for it is diminishing across the United States, and it will be a terrific day when it is finally outlawed across this country.

The departures continue:  The New England Patriots released kicker Stephen Gostkowski yesterday.  The team's all-time scorer spent 14 years with the Patriots, and he was generally as reliable as they get during his run here.  Gostkowski only played in four games last season before needing hip surgery, and it seemed likely that would be it for the 36 year-old in New England.  All we can say is cheers and thank you to the kicker.  Between Gostkowski and Adam Vinatieri, the Patriots have only really had two kickers since 1996, which is an amazing run. Meanwhile, the list of new names we'll have to learn for next season seems to grow longer by the day.

It looks like Peyton Manning won't be Monday Night Football's color analyst.  That's just as well.  We understand that the man is a football expert, and maybe he can explain things as well as Tony Romo.  However, Manning always sounds like he has a head cold, and there's just no way we could listen to him for an entire game, week after week.

Shame on Boston Bruins owner Jeremy Jacobs who seems to be going out of his way not to help the part-time workers at TD Garden.  The Bruins were the last team in the NHL to make any announcement about how they would support their employees, and apparently said support will only happen if the NHL cancels the rest of the season.  It could be months before that happens, so Jacobs is basically giving the finger to these people.  It's a disgrace.

Woody Allen found someone to publish his memoir, two weeks after being dropped by Hachette Publishing.  We're going to take a pass on reviewing that one.

Metallica announced their most recent show cancellations and postponements due to the coronavirus.  However, here's some good news for fans:  Metallica will begin posting complete live shows every Monday.

Last night's Supernatural will be the last new episode for a while, says co-showrunner Andrew Dabb, but he wants to be clear that the show will get its proper ending.  Monday night's episode was #13 of 20.  Dabb says they've filmed through episode #18, but all of the post-shooting tasks are on hold because of the coronavirus.  Dabb assures fans that they will finish the series properly, but he didn't give a timetable for when the Winchester brothers will return.

Okay kids, that's going to do it for now.  Let's have Metallica close things out with a live version of, "Fade to Black," for today's, "Song of the Day."

Thanks for stopping by, everyone.  It was great to see you, as always.  Be good, take care of yourselves, and we'll catch up with you again soon.  Until next time, that's today's Clearing out the Clutter, and we are outta here.