Welcome back!  How are you?  I know, things just keep getting crazier.  BDH and Little Buddha are doing fine in all of this.  They mostly worry about you folks, and they want to make sure you're all keeping your distance from each other as much as possible (although you're always welcome to visit them here.)  Here's hoping St. Patrick's Day brings a bit of luck to everyone, because we could all use it right now.  The guys just made a fresh pot of coffee, so grab yourself a nice medium DD, and let's clear out some Tuesday Clutter.

Donald Trump had a largely reality-based coronavirus press conference yesterday.  Not sure who finally convinced him that his downplaying the crisis was harmful.  (It sounds like this stark warning did the job.)  In any case, Trump made it clear that this is a serious problem that is not under control, and it will get worse before it gets better.  That's the exact opposite of the recent Fox News messaging, so we'll see how quickly their propaganda changes.   (They do seem to be practicing social distancing now.  That would seem to be the end of the "hoax" talk, yes?)  Trump urged people to avoid public gatherings of more than 10 people over the next 15 days, and that really, everyone should be staying home as much as possible.  He also acknowledged that it could be several months before things settle down.

The press conference was a good first step, but Trump also pressured governors to get medical equipment on their own yesterday.   He also continues to refer to the problem as "the Chinese virus," because he'll never pass up an opportunity to be racist.  Finally, he thinks he's done a perfect job of handling the crisis, so forgive us for not being overly impressed.

A new poll says most Americans don't trust what they hear from Donald Trump.  We miss the days when we had someone in the White House we could depend on in a time of crisis. 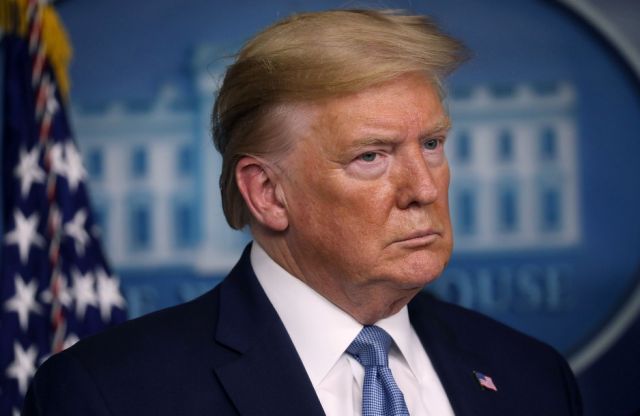 Would you buy a steak from this man?  (pic via yahoo.com)

Yesterday was a disaster on Wall Street, as fears of a recession grow (if it hasn't happened already.)  The S&P 500 fell 12%, bringing it back to being down over 26% for the year.  That wipes out most of the gains of the last three years, and the drop happened at a breakneck speed.  The Dow fell 12.9%, which was the worst single-day percentage decline since "Black Monday" in 1987.  The market looks like it could go either way today, but given the roller coaster ride we've been on, the Clutter investment team recommends enjoying a good book or seeing what's on TV instead of following the headlines.  This is why the team stresses the importance of a long-term perspective.  Things can change on a dime in either direction in the short-term.

New Hampshire is joining the list of states who are banning restaurants and bars from serving people on their premises.  Take-out, delivery, and drive-through are still viable options.  The order is in place until April 7 (for now.)  We have to wonder how many of these places across the country won't re-open after this crisis subsides.

Saturday Night Live is the latest TV show to shut down because of coronavirus concerns.  SNL is on hiatus indefinitely, so it's possible that may be it for this season.  That's too bad, because we can all use some humor wherever we can find these days.

The WWE finally made the right call and moved the upcoming Wrestlemania 36 from a stadium in Tampa to their their training facility in Orlando.  There won't be anyone in the crowd for the event.  Scrapping the extravaganza was the only real move, but it's too bad the company's annual version of the Super Bowl will be such a dud this year.  We wonder what the company's quarterly report will look like after this.  We feel bad for all of the small independent promotions which schedule their own events in the area around Wrestlemania.  Many of them were likely counting on that week to keep them in the black this year, and we hope they find a way to survive the missing revenue.

This is interesting: NBCUniversal announced they will start making their new releases available on-line at the same time they're in the movie theaters during the pandemic.  Seems likely that other studios will follow suit.  It's a smart business decision, since the theaters are facing rapidly-vanishing crowds nationwide, and people are looking for more entertainment options while they're stuck at home.  Paying $20 to rent a new movie works out to roughly the price of two tickets, so grab some popcorn (which is always better at home anyway), and see what's playing.

Oh, it seems all the smarter, now that Regal Cinemas is closing down their theaters until further notice.  AMC is limiting their crowds to less than 50 people per theater, but you have to think they'll also eventually go on hiatus.

The Minnesota Vikings re-signed quarterback Kirk Cousins to a two-year deal yesterday, and they traded also wide receiver Stefon Diggs to the Buffalo Bills for some draft picks.  Neither of these moves do Tom Brady any good.

The Las Vegas Raiders have reportedly agreed to a deal with quarterback Marcus Mariota to serve as Derek Carr's back-up, so take them off the table for the Brady sweepstakes as well.  It will be crazy if after all of this drama, Brady signs a new two-year deal with the Patriots tomorrow.

We know one player who is definitely leaving the New England Patriots:  Linebacker Jamie Collins agreed to a 3-year/$30 million deal with the Detroit Lions.  That's fine, Collins came back to the Pats to rehab his image for a year, and he generally did it, although he and the rest of the defense were exposed a bit near the end of the season.  It never felt like he'd be a long-term presence in New England, so good for him for getting his money elsewhere, and now Bill Belichick has another hole to fill.

The Dropkick Murphys know it's a drag to stay home on St. Patrick's Day, but they'll help you celebrate the holiday from the safety of your own home by streaming a full live concert, starting at 7:00 tonight.

Okay, kids that's going to do it for now.  Let's have the legendary Irish band the Chieftains close things out for us here with a terrific medley for today's, "Song of the Day."

That gets us every time.