Welcome back!  How are you?  Feels like today could be a challenge.  I woke up at 1:00 in the morning and couldn't go back to sleep until 3:30.  It's not like I felt stressed, I just wasn't tired anymore.  I slept in a little bit to make up for it, but I'm still dragging.   I'm planning on going for a walk later, and then maybe I'll just hang out with BDH and Little Buddha while they read their book.  The guys say the first step to making a plan for the day is to have some coffee.  They're brilliant, I tell you.  There's a fresh pot of coffee on the table, so grab yourself a nice medium DD, and let's clear out some Saturday Clutter.

The Trump administration was first warned about the dangers of the coronavirus in January, and they ignored it.  In January.  Let that sink in.  Donald Trump spent weeks downplaying the risks and calling it a hoax when he knew better.  The White House is running around like a bad Three Stooges movie right now when they had months to prepare for this pandemic.  What we want to know is, what stock purchases and sales has he made since that first briefing?  There's no reason to believe he didn't take care of himself first while leaving thousands, if not eventually millions, at risk of dying from this virus because of his self-absorption.  Impeach Trump again.

Donald Trump had a chance to be a hero during his press conference yesterday.  He had a chance to make a statement that would be remembered and praised by the history books for years to come.  He could have wrapped himself in the glory that he so desperately craves, and he blew it.  A reporter asked Trump what he would say to the people at home who are scared, and Trump's response was to attack the reporter.  It's beyond childish, and it shows why networks should stop broadcasting these events live.
They're not about public health.  They're about Trump getting his ego stroked because he can't go out for rallies anymore.  He rambles, lies constantly, and demands the members of his administration praise him like he's Jesus.  Networks should have their editors go through the footage and pull out anything useful that will keep the public safe, and leave the dangerous propaganda on the cutting room floor.
Donald Trump and Doctor Anthony Fauci got into a public disagreement during yesterday's briefing about whether or not a malaria drug can treat the coronavirus.  Dr. Fauci said there's no proof of that, and Trump said his gut told him otherwise.  Give us the medical expert, and get the delusional fool who doesn't believe in science away from the podium.  The country doesn't have time for his nonsense. 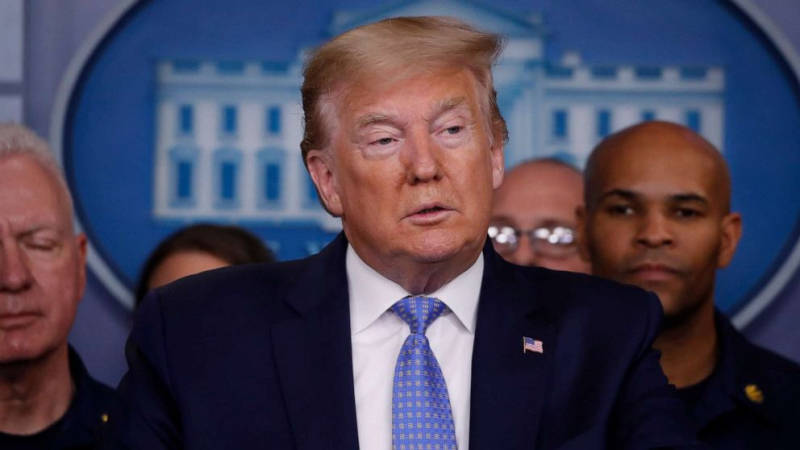 Donald Trump is a public health threat every time he speaks.  (pic via abcnews.go.com)
New York Governor Andrew Cuomo issued a shut-down order for the state yesterday that takes effect on Sunday night, as the coronavirus pandemic continues to spread.  All non-essential businesses are ordered to close.  Governor Cuomo said fines will be enforced for businesses that violate the order, but there will be no penalties for individual citizens who disobey it.  We're struck by this quote from the governor about this decision:

Cuomo acknowledged that his actions "will cause disruption. They will cause businesses to close. They'll cause employees to stay at home. I understand that. They will cause much unhappiness. I understand that also."
But, he said, "I accept full responsibility. If someone is unhappy, if somebody wants to blame someone, or complain about someone, blame me. There is no one else who is responsible for this decision."

That's a stark contrast to Donald "I take no responsibility for anything" Trump.  This is what real leadership looks like.
By the way, where is Joe Biden?  Why is the country not also hearing from him on a regular basis?  As the presumptive Democratic presidential nominee, he has an obligation to be speaking to the public in some fashion, instead of letting Trump drive the conversation.  Surely there's "someone" in his campaign who can handle a teleconference system.
What an ugly week for Wall Street.  The S&P 500 dropped about 15% over five days and is down more than 28% on the year.  That wipes out all of the gains of the past three years.  Normally, the Clutter investment team would be interested in bargains at this point.  Multi-year lows always get their attention, but the team doesn't think the carnage is done.  Stocks won't settle down until the pandemic is under control, and our staff has no idea when that's going to happen, so they want to know if they can also hang out and read with BDH and Little Buddha.  The one thing they do want to remind everyone of is, don't panic.  Keep your eye on the long-term, because as bad as this is at the moment, history has always been kind to the patient investor.
Amazon is positioning itself as an "essential business" during the pandemic, as stores close around the country, but the company's working conditions are putting its employees health at-risk,  and the workers want some changes:

Last week, Amazon workers in New York began circulating a petition calling for paid sick leave regardless of diagnosis, hazard pay, the shutdown of facilities if workers test positive for the virus, and an end to penalties for not meeting the rate. “As the coronavirus pandemic unfolds and communities everywhere prepare for the worst, Amazon workers have become crucial in getting people their food, water, and sanitation supplies,” the group wrote.

Tom Brady posted a picture on Instagram yesterday of him signing his new contract with the Tampa Bay Buccaneers.  It's a two-year deal for $50 million (guaranteed) and up to $9 million in performance bonuses.  Looks like Brady got the commitment he wanted, and more power to him.  Meanwhile, the New England Patriots are in full spin mode, saying they would have brought Brady back if he wanted to stay here.  They're telling that story to everyone who will listen, because owner Robert Kraft doesn't want anyone to get mad at him for the quarterback leaving.  It's a pretty cowardly move.  Just thank TB12 for his time, say you're looking forward to the start of a new chapter, and leave it at that.
It sounds like the Boston Red Sox know the results of MLB's investigation into their alleged sign-stealing, and the team disagrees with the findings.  No public announcement has been made about the investigation yet because of the coronavirus issue, but the Sox can deal with any fallout when baseball resumes in 2022 or 2023.
We're sorry to hear that country music legend Kenny Rogers died yesterday at age 81.  Can't claim we were hardcore fans, but we certainly remember what a star he was back in the 1980's.  It's possible there's a karaoke video somewhere out there of us and a few friends singing "the Gambler."  Our condolences to his family, friends, and fans.
Hey Hawaii Five-0 fans, we've got the trailer for the series finale, which airs on April 3  Have a look:
We're bookmarking this link for future reference:  Here are some free streaming services besides Netflix and Amazon Prime.
Okay kids, that's going to do it for now.  We all deserve a light-hearted tune to close things out after this week.  Here's Rick Astley with a Canadian choir to close things out with, "Never Gonna Give You Up," for today's, "Song of the Day."
Thanks for stopping by, everyone.  It was great to see you, as always.  Make sure to take care of yourself, and try to get a little fresh air at some point (while keeping a safe distance from others, of course.)  Be good, and we'll catch up with you again soon.  Until next time, that's today's Clearing out the Clutter, and we are outta here.