Welcome back!  How are you all doing?  We're plugging away on this end and keeping our distance from other people as much as possible.  Today's big social distancing activity involves multiple loads of laundry.  We like to live on the edge here, friends.  BDH and Little Buddha say they don't like that there's a health crisis happening, but they do like having extra time with me each day.  Those two really know how to butter a guy up, which is just fine with me.  Maybe they were just trying to prepare me for today's weather forecast, which calls for up to three inches of snow.

The flowers are just starting to peek through the ground, and now they'll be thinking, "What the hell is this?"  However, it's supposed to be 50 degrees tomorrow, so  the snow shouldn't last too long.  In any case, let's check out today's headlines.  The guys say the coffee is ready, so grab yourself a nice medium DD, because it's time to clear out some Monday Clutter.

Senator Rand Paul (R-Kentucky) is in self-quarantine after testing positive for the coronavirus.  We hope everyone who gets it has a full and speedy recovery.  However, shame on Senator Paul, who spent time in the Senate gym and attended a lunch with his colleagues while he was waiting for the results of his test.  The man is a doctor, and he knew full well he was putting his colleagues' health at risk (as well as that of everyone else around him) with his reckless actions.  Senators Mike Lee and Mitt Romney (both from Utah) are now in quarantine because of their exposure to him. 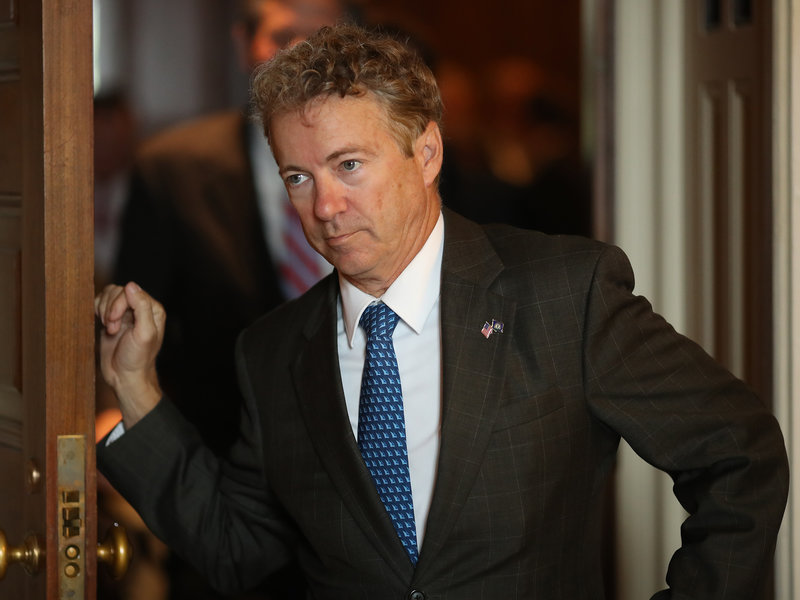 Donald Trump's response to hearing about Mitt Romney was as petty and classless as you would expect.  We have a dim-witted and incompetent buffoon in the White House.  This country's lack of leadership at the national level is as frightening as the actual virus.

Trump's latest rally press conference was detached from reality as usual.   He said he expected the pandemic to be over soon, most likely because that's what the voices in his head told him.  Just look at the self-pitying here.  The man knows he's a colossal failure who is in over his head:

In a broad mix of remarks, Trump also argued that the country was “very united,” warned that the virus would’ve been “catastrophic” if not for the massive tax cuts he signed into law in 2017, claimed the presidency had personally cost him billions of dollars, complained that no one thanked him for refusing a presidential salary, predicted the economy would “skyrocket once this is over,” touted his Department of Veterans Affairs for having “the highest poll numbers in the history of the” VA and suggested that none of his predecessors could tell him anything life-saving if he sought their advice.

Donald Trump was warned this crisis was coming in January, and he did nothing about it, so of course he's looking to blame actual leaders when they call him out for his incompetence.

Trump says car companies are now making ventilators.  Want to take a guess about whether that's true or not?

The Senate hasn't approved a coronavirus stimulus bill yet, because Mitch McConnell's first proposal (drafted without Democratic input) is all about corporate giveaways and doesn't put enough focus on protecting workers.  People still remember the giveaways to the banks during the 2008 bailout, and they don't want a repeat of that.  McConnell's legislation also establishes a $500 billion slush fund that would be directed by the Treasury Department.  Who in their right mind would give this group of grifters $500 billion to spend without oversight?  You know Donald Trump and his cronies are already drooling over the thought of gorging themselves on that money.

Mitch McConnell also better watch himself, because the coronavirus looks like it's going to disproportionately hit Republican senators (who are a collectively older group), especially with fools like Rand Paul behaving irresponsibly.  He could well lose control of the chamber soon if many more of his Republican colleagues have to self-quarantine.

Doctor Anthony Fauci deserves his own national holiday once this is all over.

Looks like it's going to be another difficult day for stocks, as investors wait for Congress to agree on a stimulus package.  The Clutter investment team says they'd rather help with the laundry than watch today's numbers.

Convicted rapist Harvey Weinstein has tested positive for the coronavirus.  He's been put into solitary confinement for the time being.  Rand Paul should be forced to share a cell with him.

On a related note, advocates are calling on Massachusetts Governor Charlie Baker to identify prisoners who could qualify for medical parole and release them because of fears of the coronavirus spreading in prisons.

It's pretty clear that this year's Olympics will be pushed back to 2021.  Can't see how the IOC has any other option at this point.

The New England Patriots are bringing quarterback Brian Hoyer back into the fold.  Hoyer, who was Tom Brady's backup for a number of years,  is reportedly returning for his third stint with the team on a 1-year deal for about $1 million.  He'll join Jarrett Stidham and Cody Kessler as the quarterback options.  The team clearly thinks Stidham is their future, and Hoyer knows the system well, so will Kessler be the odd man out, or will the Pats start the year with three quarterbacks?  It's still so weird we're even having this discussion.  Then again, nothing is normal in 2020.

Announcer Joe Buck needs something to do these days since sports have been cancelled, so he's offering to narrate your home videos.  Wonder how we could convince him to narrate a clip of BDH and Little Buddha reading their book.

Anyone want to join a Netflix party?  BDH and Little Buddha are happy to host, but no horror movies, please.  They lean more towards comedies and dramas.

Singer Neil Diamond revised his classic tune, "Sweet Caroline" to turn it into a public service announcement.  If we play this a few more times, it will feel like we're at Fenway Park, right?  We miss baseball.

Bon Jovi keyboardist David Bryan said he tested positive for the coronavirus, and that he's been sick for a week, but he's already starting to feel better.

There was a tease a little over a week ago, but Childish Gambino's new album is really here now.

Okay kids, that's going to do it for now.  How about we have Bon Jovi close things out with something off the social isolation playlist?  Here's, "Bad Medicine," for today's, "Song of the Day."

Thanks for stopping by, everyone.  Hanging out with you is always one of the best highlights of the day for us.  That's why we need you all to stay safe.  Be good, follow all recommended public health guidelines, and we'll catch up with you again soon.  Until next time, that's today's Clearing out the Clutter, and we are outta here.