There once was a young girl known as Ace who traveled through space and time with the 7th Doctor (known to her as "Professor.")  The two had many exciting adventures together, but the Doctor had a strong manipulative streak that eventually led to them parting ways after a terrible incident.  Thirty years later, the former Ace is now known as Dorothy McShane, a millionaire philanthropist who runs the organization, "A Charitable Earth."  She's moved on with her life after saying goodbye to the Doctor.  However, something is pulling her back to an otherworldly danger, as well as to the newest incarnation of the Time Lord.  Dorothy McShane's past is now her present, and maybe her future.  It's all chronicled in the new book, Doctor Who: At Childhood's End (out now), written by Ace herself, Sophie Aldred (along with Steve Cole and Mike Tucker.)

The threat in At Childhood's End feels like standard Doctor Who fare:  Someone is kidnapping the overlooked members of the population, but who is doing the abductions, and why?  The opening chapters establish the adult Dorothy's life.  It's a logical extension of the path Ace would have chosen after returning to Earth, and it comes with some understandable challenges.  One might end up feeling a little impatient for the Doctor's arrival, but all hell breaks loose once the TARDIS shows up on the scene.  Sophie Aldred knows her character well, and she and her co-writers have a great feel for the 13th Doctor's voice, as well as those of Graham, Yaz, and Ryan.  Each of the current characters gets their moment to shine, and there may even be a hint of a romance between Ace and Graham.

What really makes this book fascinating is the exploration of Ace's relationship with the Doctor.  There's a lot to unpack between the two, and it's all engrossing.  Ace has some long-standing resentments, while the Doctor has equally-old regrets (but it's not clear that the Time Lord has changed that much after all these years.)  Aldred provides an insightful perspective about how traveling with the Doctor impacts her companions.  While viewers think of the Doctor as the hero of every story, she has a complicated legacy, which continues to this day.   The question for Ace is if she can let go of the past and deal with the Doctor and others in a more trusting way in the future.

Every version of the Doctor causes incredible upheaval wherever she goes, and we rarely see the aftermath.  She's also constantly maneuvering her companions in one direction or another, without ever fully telling them why she's doing it.  That breeds some level of distrust, which was at the heart of Ace's decision to leave the Doctor all those years ago.   At Childhood's End also shows Ace eyeing the current companions suspiciously.  That feeling is returned to some extent, because they, like Sarah Jane Smith, Rose Tyler, and Amy Pond, among others, all realize that there's only one life-changing Doctor for them, but they're part of a continually-changing group for her.

It's helpful, but not completely necessary, to have some previous knowledge of Ace's history with the 7th Doctor.  There are passages and events which will have more impact for those fans who watched during the classic era, but the book gives new viewers enough material to understand what's happening.  From a personal perspective, Ace and the Doctor could have reached a fuller sense of resolution about their relationship by the end of the story.  Perhaps that's being saved for the next adventure, which we would certainly read.  At Childhood's End is a great way to pass the time while the show is on hiatus, and there's also always her original adventures with the Doctor to revisit. 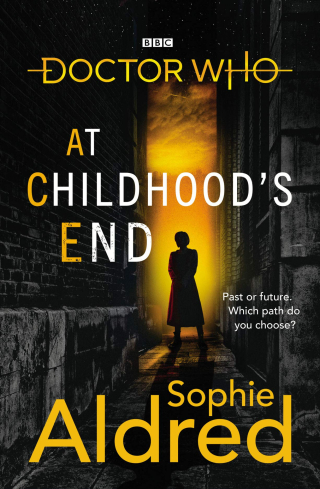 Ace returns, and it's like she never left.  (pic via amazon.com)