Welcome back!  Come on in, have a seat.  How are you?  We were just reviewing today's to-do list, which is full, but not too crazy.  I took care of most of the ice piles on the driveway yesterday, just in time for new ones to form tomorrow, judging by the forecast.  February's weather seems to have a mild attitude problem, but we'll get through it.  In the meantime, we're staying focused on the important things, like the fact that BDH's birthday is in two days!  That will be fun.  Speaking of the soon-to-be birthday boy, he and Little Buddha just made coffee, so grab yourself a nice medium DD, and let's clear out some Wednesday Clutter.

Senator Bernie Sanders won the New Hamsphire primary yesterday, with Mayor Pete Buttigieg and Senator Amy Klobuchar coming in second and third respectively.  (Look at that, it didn't take a week to get the results, unlike, say Iowa.)  It was a disappointing night for Senator Elizabeth Warren, who came in fourth, and it may have been the beginning of the end for Joe Biden, who came in fifth.  Those seeking clarity about the Democratic nominee are likely to be disappointed, because the race now moves on to Super Tuesday on March 3, and the results are likely to be different when more diverse states join the conversation.

(Side note:  It's interesting that Amy Klobuchar coming in 3rd yesterday is the top story, but Elizabeth Warren came in 3rd in Iowa and got erased by the media. It's almost as if one of them is a threat to corporate interests or something.)

The Democratic presidential primary field is shrinking, as Andrew Yang and Senator Michael Bennet both ended their campaigns yesterday.  It sounds like former Massachusetts Governor Deval Patrick may soon do the same, given his poor showing.  Governor Patrick is a tremendous politician and a powerful speaker, but we still don't understand why he entered this race so late, unless it was just to try to blunt the progressive campaigns, which would be disappointing.

Billionaire Michael Bloomberg has escaped any significant scrutiny so far in the Democratic primary, but expect that to change as he continues to buy his way into the conversation.  This clip of Bloomberg defending New York City's "stop and frisk" policy and racist police practices in general in 2015 is one more reason why he should not be under consideration for the nomination.  Democrats can and must do much better than this:

"So, one of the unintended consequences is people say, 'Oh my God, you are arresting kids for marijuana that are all minorities.' Yes, that is true. Why? Because we put all the cops in the minority neighborhoods. Yes, that is true. Why did we do it? Because that's where all the crime is," Bloomberg says. "And the way you get the guns out of the kid's hands is to throw them up against the walls and frisk them."

While all of that is going on, there's a crisis at the Department of Justice, where all four prosecutors in the Roger Stone case resigned yesterday after the DOJ decided to change their sentencing recommendation for Donald Trump's friend.  The original recommendation was for 7 to 9 years, but Trump tweeted on Tuesday that it was a "disgrace" and "miscarriage of justice," and now the DOJ is seeking a reduced sentence.  This is blatant corruption of our judicial process, yet another abuse of power by Donald Trump, and it can not be allowed to stand.  Attorney General William Barr is repeatedly violating his oath of office in order to carry out Trump's personal preferences, and he must be impeached. 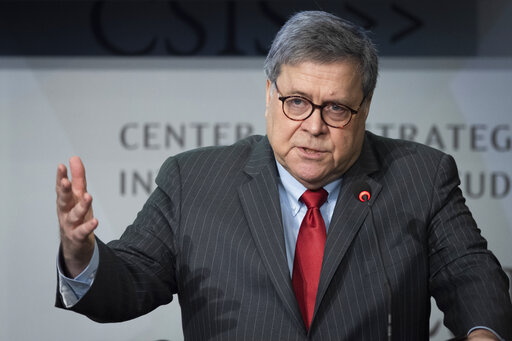 Attorney General Barr is only tough on crime when it doesn't involve Donald Trump's friends. (pic via accesswdun.com)

Boston Red Sox pitchers and catchers have their first workout today, so it's a good thing that the team officially named Ron Roenicke the interim manager yesterday.  It would have been awkward to start spring training without someone in charge.  Roenicke is expected to lose the "interim" label after he's presumably cleared in the MLB investigation into the Red Sox sign-stealing allegations.

The Boston Red Sox are reportedly close to working out a deal with free agent Kevin Pillar, so they can have a right-handed batting option in the outfield, now that Mookie Betts is gone.  That's fine, although it means we'll go back to thinking the announcers are saying "Kevin Millar" every time they mention him.

Cheers to retired NBA All-Star Dwayne Wade and his wife actress Gabrielle Union, for their support of their transgender daughter Zaya.  Their love and acceptance can help other parents who are facing the same situation.

Some familiar faces will be returning for the Criminal Minds two-part series finale which airs next Wednesday.  Who is appearing, and who is not, may surprise fans.

It looks like Joey Kramer might have worked things out with his bandmates.  Kramer was back on the drums for Aerosmith's show in Las Vegas on Monday, so hopefully he and the rest of the group have resolved their legal troubles and get back to playing music together.

Okay kids, that's going to do it for now.  Here's Aerosmith to wrap things up with a live version of, "Toys in the Attic," for today's, "Song of the Day."

Thanks for stopping by, everyone.  It was great to see you, as always.  BDH and Little Buddha double-checked, and tonight's "One Chicago" episodes are all new, so you're invited to come back to watch those with the guys if you like.  They'll take any chance they can get to hang out with you.  Otherwise, enjoy the rest of your day, be good, and we'll catch up with you again soon.  Until next time, that's today's Clearing out the Clutter, and we are outta here.