Welcome back!  How are you?  We're pretty good at the moment.  I dealt with most of the shoveling yesterday.  The ice piles are still there, but they're smaller than they were, so I can at least drive over them for now.  BDH and Little Buddha say it might snow and rain a little bit again today, so I may have to revisit that this afternoon.  We'll see.  In the meantime, there's plenty of news to cover, so let's get to work.  The guys made coffee, so grab yourself a nice medium DD, because it's time to clear out some Tuesday Clutter.

The New Hampshire primary has arrived!  Now, just to review one more time, unlike some other states, the process in the Granite State is pretty radical:  People vote, and then the candidate with the most votes at the end of the day wins.  Crazy, right?  Like we said yesterday, Senator Bernie Sanders is currently leading in the polls in New Hampshire, but almost half of voters say they're still undecided, and given the state's usual rebellious streak, almost anything could happen. 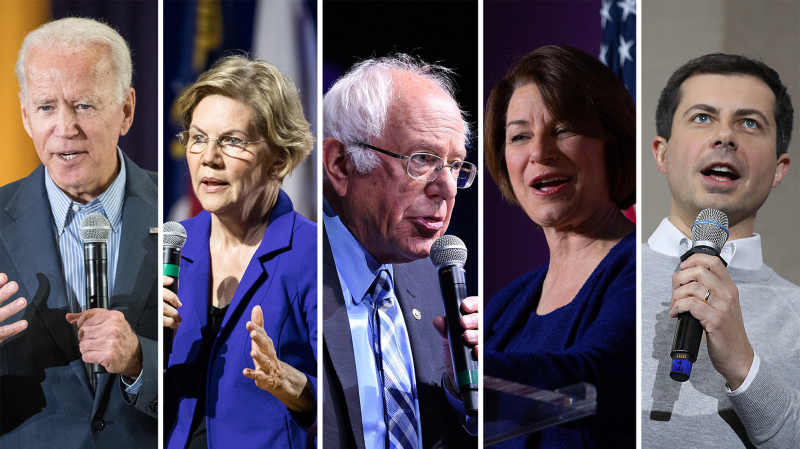 It's time for New Hampshire voters to weigh in on the Democratic presidential primary.  (pic via uspresidentialelectionnews.com)

They're currently competing against each other for the Democratic presidential nomination, but Senators Elizabeth Warren and Bernie Sanders came together, along with a few of their other colleagues, to issue a public letter warning Amazon to improve its working conditions.  The move comes after it was revealed that Amazon warehouse workers have a higher than average injury rate.

Meanwhile, Amazon wants to depose Donald Trump as part of their lawsuit after being rejected for a multi-billion defense contract.  It looks like Amazon plans on keeping Trump's ongoing corruption in the news during this suit, saying in a statement:

"President Trump has repeatedly demonstrated his willingness to use his position as President and Commander in Chief to interfere with government functions -- including federal procurements -- to advance his personal agenda."

Senate Budget Chairman Mike Enzi (R-Wyoming) won't hold a hearing on Donald Trump's proposed budget, because he doesn't want to be seen defending the shameful proposal that would cut Medicaid, Medicare, food stamps and other safety net programs to protect Trump's tax cuts to the uber-wealthy.  Chairman Enzi defended himself by arguing, "Congress doesn’t pay attention to the president’s budget exercise," which is often true.  However, if the proposal was something to be proud of, you know he'd be in front of the cameras kissing up to the Great Pumpkin like everyone else in the GOP.  Instead, Trump's released a GOTV present to Democrats, and Enzi doesn't want to be anywhere near it.

For a variety of reasons, Donald Trump could end up being the worst possible person to have in charge of the country during the coronavirus scare.  Turns out, putting a racist low-intelligence germophobe in the White House was probably not a great idea.

We didn't realize there were questions about this event, but apparently the assassination of Malcolm X will be re-investigated, due to concerns that perhaps the wrong men were convicted of the crime.

A new report highlights the dangers of too much time on social media for teens.  It seems pretty well-established at this point that extensive time online is likely to be detrimental to a person's mental health.  BDH and Little Buddha love to see you all every day, but they encourage you to log off and engage in other activities during the day (once we're done here, of course.)

Another new study says that it may be possible to eliminate cervical cancer cases in the United States in the next 20 years,  if not sooner, thanks to screenings and  the HPV vaccine.  That would be an amazing health accomplishment, and we should focus on making it happen.

BDH and Little Buddha think we should take a quick break from the news so everyone can check out The Dodo Rescue Dog Show.  Enjoy!

Boston Red Sox chief baseball officer Chaim Bloom says the team isn't giving up on the 2020 season, but trading Mookie Betts and David Price to the Los Angeles Dodgers was about establishing long-term flexibility for the club.  That sounds like a Grade A punt to us, but we can't stay this cranky right out of the gate.  We've got our annual spring training trip coming up in a few weeks, so we'll try to put our irritation aside and hope this year's team still finds a way to be competitive.

Major League Baseball is reportedly looking to revamp the postseason format, and it all sounds like pure garbage.  The playoffs would be expanded from 10 to 14 teams, the division winner with the best record would get a first-round bye, and then the remaining division winners would be allowed to choose their opponents from the wild card winners.  To review, that's almost half of the 30 teams in baseball making the postseason, with a dash of reality TV thrown in for good measure.  This feels like a desperate bid to attract younger viewers while diluting the value of the regular season and stretching things out until early to mid-November.  Hard pass.

Let the NFL quarterback musical chairs begin:  Philip Rivers and the Los Angeles Chargers parted ways yesterday after 16 years together.  Which teams are interested in a 38 year-old quarterback who is still somewhat above-average, and at what price?  Guess we'll have to wait and see.  This also means the Chargers are now officially on the table as an option for Tom Brady if he really decides he wants to leave the New England Patriots.

Speaking of Tom Brady, New England Patriots owner Bob Kraft reportedly wants Brady to test the free agent market before the two sides make a final decision about their business relationship.  That seems risky, but it feels like Kraft is betting that the market isn't as robust for Brady as TB12 might think it is, and that the Patriots will beat any "reasonable" offers.   If this story is true, that means we have over another month of speculation about Brady's future ahead, because NFL free agency doesn't start until March 18.

The ratings for this year's Oscars hit an all-time low, falling 20% from last year.  We didn't see the ceremony, but while some are blaming the lack of a host to guide the night along, we wonder how much the ratings are impacted by the glut of awards shows that are now on this time of year, as well as perhaps some damage from the Internet.  The Academy Awards have run too long for as long as we can remember.  However, it used to be more special back when it was one of the only times you'd see celebrities all dressed up on TV, and you couldn't get a Hollywood fix 24/7 from your computer.  It's not surprising fewer people are making the time to watch it these days.

Who's up for a CSI revival?

Janet Jackson is going on tour this summer, and she also has a new album, called Black Diamond, coming out this year.  The tour will support Black Diamond, but it will also celebrate the 30th anniversary of her Rhythm Nation 1814 record, and we're a little startled to realize that came out three decades ago.

Okay kids, that's going to do it for now.  Let's have Janet Jackson close things out with, "Escapade," for today's, "Song of the Day."

That should help balance out today's grey skies.