Welcome back!  How are you?  It's kind of a dreary looking day out there.  However, our crew is doing well at the moment.  BDH is excited about his birthday tomorrow.  We're still trying to figure out the best way to celebrate, but we'll figure it out.  Other than that, we're just plugging away this week.  Let's see what's going on in the news.  The guys just made coffee, so grab yourself a nice medium DD, because it's time to clear out some Thursday Clutter.

Donald Trump's increased assaults on the rule of law make it clear that any Republican who thought he might learn some restraint after being impeached was so delusional, they need to be removed from office at the first possible opportunity.  Actually, they all have to go.  The unlawfulness of this administration is on every last member of the GOP.

Attorney General William Barr will reportedly appear before the House Judiciary Committee on March 31, where he will face questioning about multiple cases of corruption relating to the Department of Justice.  We're suspicious that Barr will bail on that appearance, but if he does in fact make it, there's no reason to believe he'll provide honest answers.  The nation's top law enforcement has interest in nothing else but protecting Donald Trump.  He's repeatedly violated his oath of office, is still doing it for the world to see, and should be impeached.

A former Ohio State University wrestling captain testified on Wednesday that Rep. Jim Jordan "begged" him to say that Jordan didn't know about the rampant sexual abuse being inflicted on the wrestling team by their former doctor.  Jordan was an assistant coach from 1987 to 1985 and has been repeatedly accused of ignoring the actions of the late Dr. Richard Strauss.  With his experience covering for sexual misconduct, you can see why Rep. Jordan is such a favorite of the White House occupant.

Yesterday was talk of Michael Bloomberg defending the racist "frisk and search" police policy.  Now, the AP has a story about Bloomberg blaming the 2008 financial crisis on the end of the discriminatory policy of redlining minority neighborhoods.  So Bloomberg thinks trying to make the U.S. housing market more accessible caused the meltdown of the economy, not the fact the banks engaged in predatory lending with mortgages that were designed to eventually explode.  The man is running in the wrong presidential primary - he's clearly more comfortable in the Republican Party. 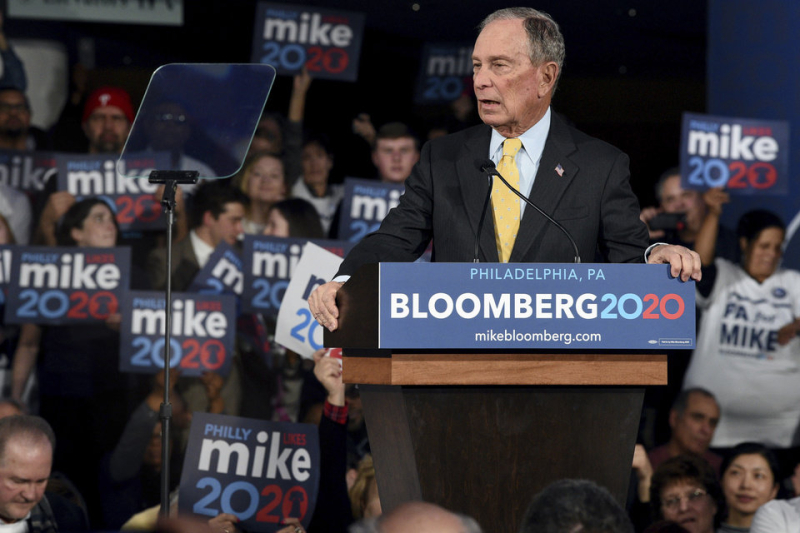 Not the right choice for Democrats.  (pic via oklahoman.com)

It's good to hear that this week's New Hampshire primary set a new turnout record.

UK financial authorities are apparently investigating Barclays CEO Jes Staley's relationship with the late pedophile Jeffrey Epstein.  The fact that Staley had any sort of connection to that piece of trash should have led to an automatic dismissal, but the financial industry doesn't put much weight on morals.

Major League Baseball introduced a handful of rule changes for the 2020 season yesterday.  The big one is that pitchers will now have to face a minimum of three batters (or finish the inning) unless they're injured or ill.  That should help trim some time off the clock.  There are also changes to roster sizes, the IL, and managers now have to decide quicker about whether or not to make a replay challenge.  We don't have problems with any of this.  What do you think?

Mookie Betts and David Price had their introductory press conference with the Los Angeles Dodgers yesterday.  It's going to be a while before we can stomach the thought of watching Betts in a Dodgers uniform.  The pain is just too strong.

Hockey analyst Jeremy Roenick has apparently been fired from NBC Sports for making comments during an interview in December about wanting to sleep with two of his coworkers.  Roenick says he's "disappointed and angry" about the dismissal, but how out of touch do you have to be to make public comments like that?  The only surprise is that it took the channel that long to send him packing.

We're suspicious of any Doctor Who "fans" who claim to be outraged over the ending of last week's episode.   The Doctor was awkward when one of her companions discussed his fear of his cancer returning.  First, the point of the conversation was that sometimes people don't know what to say in those situations.  Second, this version of the Doctor describes herself as "socially awkward," and this was another example of that.  Finally, no more than a handful of the 13 versions of the character would ever possibly have done well in that spot, and to claim otherwise is nonsense.  People who are angry about this are largely the same group who are angry over everything about the current show, including the fact that the role is being played by a woman, and that there are socially conscious storylines.

Speaking of Doctor Who, the marvelous people at Big Finish have a new audio adventure coming out for the Torchwood series, and the guest voice is Monty Python's own Michael Palin!  We don't have much more than a passing knowledge of the Doctor Who spinoff, but we can't wait to hear this combination of worlds!

Wes Anderson has a new movie coming out on July 24, and it's got another amazing cast.  Check out the first trailer for The French Dispatch:

Hey Ray Donovan fans, Liev Schreiber wants you to know the show may not be finished just yet.

Okay kids, that's going to do it for now.  Of course we're focused on tomorrow being BDH's birthday, but here's a tune for those of you who want to get an early start on Valentine's Day.  We give you Paul McCartney & Wings with, "Maybe I'm Amazed," for today's, "Song of the Day."

Thanks for stopping by, everyone.  It was great to see you, as always.  In case you're wondering, the only birthday present BDH is asking for is to hang out with you again whenever you have a chance tomorrow.  That's enough to keep him smiling.  So, enjoy the rest of your day, be good, and we'll catch up with you again Friday.  Until then, that's today's Clearing out the Clutter, and we are outta here.